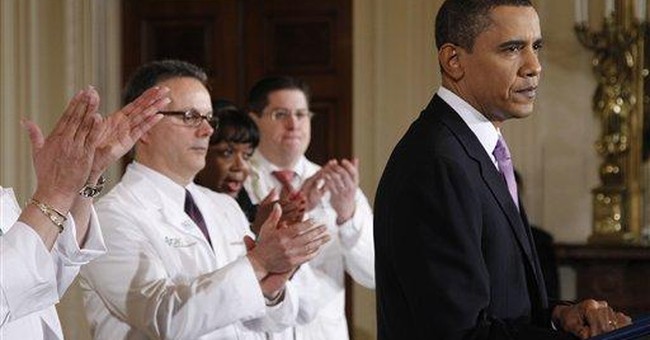 WASHINGTON -- He had to give them something. During his first year in office, Barack Obama made the rounds of his constituents and tried to appease them all. For the pacifists, there were promises to get out of Iraq. Self-loathing Americans were given a global kowtowing presidential apology tour. The Marxist-librarian constituency was assuaged when he accepted communist literature from Hugo Chavez. To satisfy Rodney King "can we all get along?" adherents, Mr. Obama promised to close the terrorist detention facility at Guantanamo Bay. Proponents of global environmental policy, universal health care, nationalized industry and massive government all got something.

But the lesbian, gay, bisexual and transgender community, which worked so hard to elect Mr. Obama, wasn't feeling the love. The president wouldn't let them out of the closet, they argued, and their patience was wearing thin. POTUS had to give them reason to stay in the fold.

The payoff came in his State of the Union address, when Mr. Obama went off on another frolic and diversion in declaring, "This year, I will work with Congress and our military to finally repeal the law that denies gay Americans the right to serve the country they love because of who they are."

That set Washington's Self-Esteem Caucus on full throttle. "Fairness" is liberalism's golden calf and now a central organizing principle of Mr. Obama's national security policy. The pundits, citing politicians and polls, declared that "society has moved on" and that the 1993 law barring active homosexuals from military service is "old and outdated."

When Secretary of Defense Robert Gates went so far as to suggest that he was prepared to ignore enforcement of the law, he wasn't chastised; he was commended. Others who once stood up for our military and its families but who now voice support for opening the military to active homosexuals are -- for the first time in their careers -- cited by the media as "authoritative," even "heroic."

Such is the inane duplicity that passes for governance in our nation's capital. Proponents of overturning the law cite the hurt feelings of homosexuals, their "integrity" and the ever-popular "aw, shucks, gee whiz, can't we just let these nice folks serve the country they love?" argument. But few have actually addressed the national security implications of such a change. Now the Joint Chiefs of Staff have done just that.

Army Chief of Staff Gen. George Casey informed the Senate Armed Services Committee he has "serious concerns" about repealing the law in the midst of war. "We just don't know the impacts on readiness and military effectiveness," Casey testified.

A somewhat softer note was sounded by Air Force Chief of Staff Gen. Norton A. Schwartz, who said, "This is not the time to perturb the force that is, at the moment, stretched by demands in Iraq and Afghanistan and elsewhere without careful deliberation."

Adm. Gary Roughead, chief of naval operations, testified that he endorsed a "study" of the issue because "only with that information can we discuss the force that we have, not someone else's." He also resisted a "freeze" on discharges for homosexual behavior, citing duty to "the families that support the force."

The straightest shooting of all was done by Gen. James Conway, the commandant of the Marine Corps. In testimony to the House Armed Services Committee on Feb. 24, he said, "Unless we can strip away the emotion, the agendas and the politics and ask ... 'Do we somehow enhance the war-fighting capabilities of the United States Marine Corps by allowing homosexuals to openly serve?' then we haven't addressed it from the correct perspective." Then he reloaded.

After observing that proponents of repeal have failed to produce any evidence that openly homosexual individuals' serving in uniform will improve combat readiness, Conway unequivocally stated: "At this point ... my best military advice to this committee, to the secretary and to the president would be to keep the law such as it is."

Whether Mr. Obama and his allies in Congress will heed this wise advice from a war fighter remains to be seen. Buck McKeon, the ranking member of the House Armed Services Committee, has cautioned, "Before the president or special interests force a change in the policy or law, Congress deserves to see from the services concrete, in-depth evidence that readiness concerns require a change and that such a change would not degrade wartime military readiness."

Rep. McKeon is right. Defense Secretary Gates, Senate Armed Services Committee Chairman Carl Levin and Mr. Obama need to call a halt to their planned "moratorium" on discharges for those who engage in homosexual behavior. The 1993 law is clear that such conduct presents "an unacceptable risk to the high standards of morale, good order and discipline, and unit cohesion that are the essence of military capability." Perhaps the commander in chief can explain how, in the midst of war, any of that has changed.