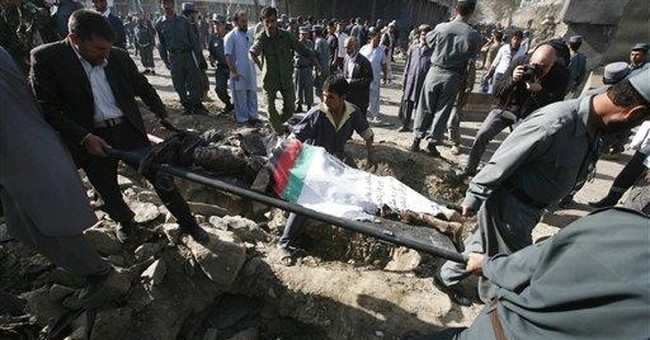 WASHINGTON -- Eight years ago this week, just 25 days after the vicious attacks of 9/11, the U.S. struck back at the Taliban and al-Qaida in Afghanistan. Thirty-three days later, U.S.-supported Northern Alliance troops were in Kabul, and the remnants of al-Qaida and its Taliban hosts were in retreat to Kandahar and mountain redoubts along the Afghanistan-Pakistan border. All of this was preceded by intense diplomacy and a virtually nonstop publicly aired series of presidential announcements, news conferences, speeches, debates and discussions at the White House, from the badly damaged Pentagon, in congressional hearings -- even at the United Nations. In December, three months after the U.S. was attacked, public approval for Operation Enduring Freedom was nearly 90 percent. Today fewer than half of Americans support continued U.S. military operations in Afghanistan. The difference is leadership.

The Obama administration is now in its ninth month of a self-inflicted quandary over what to do about Afghanistan. Human pregnancy and giving birth takes less time and is -- at least according to my wife, the mother of four -- less painful.

On his first day in office, President Barack Obama promised a new era of "openness and transparency" in Washington. The government, he explained, "should not keep information confidential merely because public officials might be embarrassed by disclosure, because errors and failures might be revealed, or because of speculative or abstract fears."

Meetings would be open; voices would be heard; the public would be fully informed about the actions of government, we were told. To this end, Mr. Obama instructed: "Nondisclosure should never be based on an effort to protect the personal interests of Government officials at the expense of those they are supposed to serve."

However, non-disclosure has become the order of the day when it comes to the administration's policy on Afghanistan, and public confidence in Operation Enduring Freedom has plummeted. The administration's procrastination, vacillation and secrecy about "the options in Afghanistan" also have eroded international support -- once considered an essential component for waging a successful campaign.

On Oct. 1, Gen. Stanley McChrystal, Mr. Obama's hand-picked senior commander, addressed the International Institute for Strategic Studies in London. Though his appearance and remarks were approved in advance, the general has since been rebuked for warning that the situation in Afghanistan is "serious" and "deteriorating" and that "waiting does not prolong a favorable outcome." He added that the effort "will not remain winnable indefinitely, and nor will public support." He was right.

This week, Defense Secretary Robert Gates, never known for backing his subordinates in any of his previous incarnations, admonished the general. Speaking at the annual meeting of the Association of the United States Army, Gates said that while Mr. Obama deliberates on Afghanistan, "it is imperative that all of us taking part in these deliberations -- civilians and military alike -- provide our best advice to the president candidly but privately."

On Tuesday, congressional leaders were summoned to the White House and handed the same sheet of music. It didn't work quite as well as the O-Team had hoped. House Speaker Nancy Pelosi, clearly repelled by Senate Majority Leader Harry Reid's suggestion that Democrats would "support whatever" the administration decided to do in Afghanistan, took up the attack on Gen. McChrystal: "With all due respect, his recommendations to the president should go up the line of command. They shouldn't be in press conferences." Sen. John Kerry, chairman of the Senate Foreign Relations Committee, said "it would be irresponsible" to send more troops until it becomes clear "what is possible in Afghanistan."

Instead of making Gen. McChrystal available for congressional testimony -- as the Bush administration did with Gen. David Petraeus -- the Obama administration has decided to muzzle its battlefield commander. It is a serious mistake.

Mr. Obama, enmeshed in an increasingly unpopular war and an uphill fight for his far-reaching domestic policy agenda, is now at risk of going the way of Lyndon Johnson. "Landslide Lyndon," intent on pursuing his "Great Society" goals, refused wise counsel to "go for a victory or not at all" in Vietnam. Instead, Mr. Johnson brought forces into the fight piecemeal, in what he called "incremental escalation." It was a disaster -- one that need not be and should not be repeated in the shadows of the Hindu Kush.

Gen. McChrystal has defined victory: a stable, pro-Western government in Kabul that respects the human rights of the people of Afghanistan. He has asked for what he needs to win: more U.S. troops, improved reconstruction aid, clearer lines of command and control, and more help building national infrastructure -- roads, schools, clinics and hospitals.

The American people, whose sons and daughters have volunteered to serve in harm's way, deserve to hear this directly from Gen. McChrystal. If the Obama administration wants to win this war, it will dispatch Gen. McChrystal to Congress with orders other than "quiet, please."