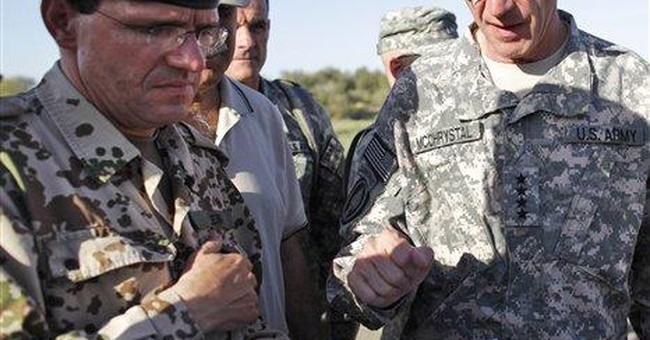 KHAN NESHIN, Afghanistan -- We're with the 2nd Light Armored Reconnaissance Battalion in southern Helmand province, just 75 kilometers from Pakistan, in "battle space" that was the heart of Taliban territory until a few weeks ago. When these Marines fought their way into this dusty district capital in July, the Taliban were stunned. No Afghan government or coalition authorities had been here since 2002. Taliban leaders across the border in Pakistan told their minions to fight back. They did, and it was a terrible mistake. Scores of them died trying to stop the joint American/Afghan National Army troops from establishing a foothold here.

That there are any Americans this close to the Afghanistan-Pakistan border is a tribute to the remarkable Marines of this battalion and those who love them at home. From March through October last year, they were deployed in western Iraq, covering 50,000 square kilometers of trackless desert along the borders with Syria and Saudi Arabia. When they returned home to Camp Lejeune, N.C., Lt. Col. Tom Grattan took command of the battalion and began training for possible overseas commitment in November 2009. But in January, new orders came down: Ready two of the battalion's Light Armored Reconnaissance companies and a headquarters element for deployment to Afghanistan -- by May.

In a matter of weeks, the battalion reassigned Marines and sailors, extended duty tours, canceled transfers and postponed leave. By March, companies C and D and essential command, control, communications and logistics support contingents were at the National Training Center, in Fort Irwin, Calif., for six weeks of live-fire tactics, gunnery training and rehearsals in terrain similar to the terrain in Helmand province. Less than 70 days later, both companies, their light armored vehicles and half the battalion's Headquarters and Service Company -- more than 400 in all -- were in Afghanistan and ready for a fight.

They didn't have to wait long. Less than two weeks later, the 2nd Marine Expeditionary Brigade launched south from Camp Leatherneck on Operation Khanjar. The mission for the 2nd Light Armored Reconnaissance Battalion: Conduct a 230-mile movement to wrest this southern-most district of Helmand province from Taliban control.

Racing south across the desert to avoid IEDs on the dirt tracks that pass for roads, the Marines seized the ancient mud-walled fortress surrounding this district capital, raised the Afghan and American flags and set out to pacify the countryside. While hunting the Taliban, the battalion also built a combat base to protect a crucial Helmand River crossing point and named it Combat Outpost Payne for one of their comrades killed in action here in Afghanistan in 2004.

On the Fourth of July, the Taliban launched a combined-arms attack against the district center here in Khan Neshin that was repulsed without any American casualties. Most Taliban efforts to fight back have been ineffective -- but not all. On July 10, a Taliban-implanted IED detonated beneath a Company D light armored vehicle, killing Master Sgt. Jerome D. Hatfield and Lance Cpl. Pedro Barboza Flores, and on July 23, Sgt. Ryan Lane, an infantry scout team leader, was killed by a barrage of mortar fire. Despite these casualties, the battalion continued to train members of the Afghan National Army and Afghan National Police and conduct civil affairs operations to win over the local population.

It worked. By the end of the month, exploiting intelligence developed by the Drug Enforcement Administration and confirmed by local informants, the battalion raided Safar Bazaar, seizing massive quantities of opium, homemade explosives, fuses and detonators for IEDs.

In preparation for Afghanistan's presidential elections Aug. 20, the 2nd Light Armored Reconnaissance Battalion constructed new Afghan National Police stations and delivered humanitarian assistance provided by the United States Agency for International Development, a U.S. Army Psychological Operations unit and a "cash for work" program administered by Marine civil affairs personnel through the district governor. A day before the elections, local Afghans confirmed intelligence that the Taliban planned to launch an attack to disrupt the elections. The battalion launched a series of raids that night, targeting Taliban leaders in a half-dozen engagements -- killing more than 30 of the enemy without a single civilian or allied military casualty. The next day, residents peacefully cast their ballots.

Though the Taliban no longer want to fight the 2nd LAR, they haven't given up. Last week, a Taliban IED killed Lance Cpl. Christopher S. Baltazar and Hospital Corpsman 3rd Class Benjamin P. Castiglione and wounded three other Marines.

Until the 2nd LAR arrived here, this part of Afghanistan was without any government or coalition presence since 2002. On July 4, with Brig. Gen. Lawrence Nicholson, commander of the Marine Expeditionary Brigade present, Afghanistan's national flag was unfurled, and Masood Ahmad Rasooli, a university-trained pharmacist in his late 20s, was installed as district governor. When I asked him this week whether he has been threatened, he shrugged and told me through a Marine interpreter, "Of course. That comes with the job."

Although he is young, Masood knows what is needed in this dusty, primitive area. "With irrigation, there are many crops farmers here can grow besides opium, but we must have roads to deliver produce to markets," he told me. He also knows that the Taliban told the people that the Marines would depart after the Aug. 20 elections. They didn't. Now the Taliban say that U.S. troops will leave after Ramadan is over, Sept. 20.

As I left him, Masood said: "We hope the Marines will stay until we have enough good (soldiers) and (police) here to protect the people. Otherwise, the Taliban will return, and the people will never have any schools, clinics or hope." It is a prophetic lesson that officials in Kabul and Washington ought to heed. Otherwise, this battle space once again will belong to those who hate America.

Fauci Finally Admits What We All Knew About the COVID Vaccine, Masks, and Infections
Townhall
This aged well: Here's another look at Jennifer Rubin's take that Gov. Greg Abbott was 'going to kill more Texans'
Twitchy
Joe Biden Levies a New Threat, as His Eyes Continue to Disappear Into His Face
Redstate
This 9-0 SCOTUS Ruling on Guns Shows Just How Extreme (and Dangerous) the Biden Administration Really Is
PJ Media