Niger Innis ?is the National Chairman of CORE, one of America’s oldest civil rights organizations. A regular Fox News Channel contributor, Mr. Innis was one of the first political and social commentators for MSNBC upon its launch in 1996. He was hired as a political commentator for National Public Radio in 2004. Mr. Innis currently provides weekly commentary for CNN and the Fox Business Network. Mr. Innis has also provided commentary for ABC News, CBS News, BBC, CBC and other major outlets. He remains one of the most sought-after political and social commentators in the country. In 2014, Mr. Innis entered the Republican primary for Nevada’s 4th Congressional District. He won the endorsement of the Nevada Republican State Convention, but narrowly lost a hotly contested race to former Rep. Crescent Hardy (R-NV). Mr. Innis’ activities in the international arena are many. In 1997 Mr. Innis led several democracy promoting delegations to Nigeria to assist the transitional process from military to civilian rule. On May 29, 1999 Mr. Innis was invited to attend the inauguration of Nigeria’s first elected president since the 1970s. In 1998 Mr. Innis led a CORE delegation to East Africa to promote peace and security for the country of Sudan. Innis met with heads of state from Uganda, Kenya, Sudan and John Garang of the Sudanese People’s Liberation Army. In 2000, Mr. Innis was selected by senior U.S. officials to serve on the American Swiss Foundation Young Leaders Conference in Zurich, Switzerland. In 1997, he was honored as a delegate to the 19th American-German Young Leaders Conference in Hamburg, Germany. In 2003, Mr. Innis was elected to the United Nations Executive Committee of NGO's; this body oversees and regulates the activity of UN authorized NGOs around the world. Mr. Innis attended Georgetown University. Mr. Innis currently serves on the board of the American Conservative Union, American Media Institute, Accuracy in Media, National Black Chamber of Commerce, Founding Member Project 21 of the National Center for Public Policy Research, and National Rifle Association (NRA) Membership, Outreach, Nominations, and Ethics Committees. In 2014, Mr. Innis was elected to the Executive Board of the Nevada NAACP. He was born and raised in Harlem, New York and has lived in North Las Vegas, Nevada since 2008.

In addition to his role with CORE, Innis is on the Advisory Committee member of the National Center for Public policy Research Project 21. He is a Founding Member of 3rd. Millennium, an organization to promote young leaders that will focus of the problems facing the next generation.

In August 1997, Innis served as a delegate for the 19th American-German Young Leaders Conference, sponsored by the American Council on Germany and Atlantik Brucke. He was selected along with 23 other Americans to travel to Hamburg, Germany to meet their German counterparts to discuss America's relationship with the European Union.

In 1993, Niger served as campaign manager for the Roy Innis for Mayor campaign in New York City's Democratic Party primary. Although the candidate was outspent $3.5 million to $100,000 by the incumbent Mayor David Dinkins, the Innis campaign was able to garner more than 25% of the vote in the primary.

Nigers' experience has lead to several appearances as a civil rights activist on CNN, Fox News, CNBC's "Equal Time", and Bill Maher's "Politically Incorrect." His radio appearances include "The Jim Bohannan Show" and "The Gil Gross Show." He has guest-hosted on "The Bob Grant Show" & "Barry Farber Show".

In 1990, Innis graduated from Georgetown University with a Bachelor of Science degree in Political Science. While attending the University, he became the Chief Executive Officer of the Association for the Preservation and Development of the Negro Spiritual. Innis, born and raised in Harlem, New York, currently live in Westchester, New York. 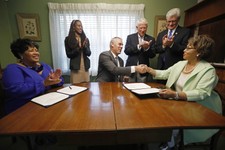 End The Democrat Senate Filibuster Against Aurelia Skipwith
By Niger Innis
Aurelia Skipwith may not be a household name, but she is an outstanding example of how many African-Americans have overcome ...
November 02, 2019 Foreign Hackers Are Waging War On Us. Here’s How To Stop It.
By Niger Innis
One of the largest computer hacks ever perpetrated by a foreign government against U.S. citizens was detected recently—and the Trump ...
December 21, 2018 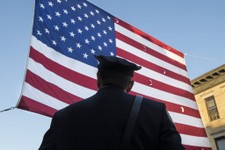 Black America’s Best Ally: Cops
By Niger Innis
Earlier this week, a black Muslim radical posted on his Instagram page that he would be "be putting wings on ...
January 02, 2015
The Environmental Lobby's Great Forest Con
July 28, 2013 |
Not So Fast, Greenpeace
September 15, 2011 |
Affordable Energy is Essential for Jobs, Justice and Better Health
September 07, 2011 | 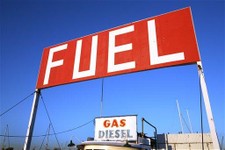 Stop the War on Poor Families
By Niger Innis
Liberal politicians and environmental activists continue to say we must switch to “green” energy. Oil, gas, coal and nuclear must ...
October 27, 2008 Stop the War on Poor Families
By Niger Innis
As Democratic Party delegates gather in Denver, America is repeatedly being told that we must transform our economy to “green” ...
August 28, 2008
Commentary Archives
CARTOONS | Henry Payne
View Cartoon