Niger Innis
|
Posted: Nov 02, 2019 12:01 AM
Share   Tweet
The opinions expressed by columnists are their own and do not necessarily represent the views of Townhall.com. 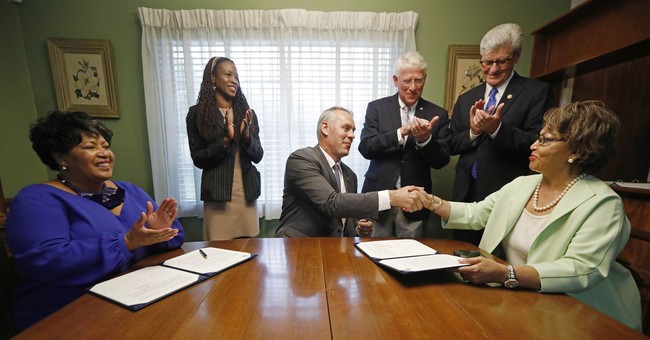 Aurelia Skipwith may not be a household name, but she is an outstanding example of how many African-Americans have overcome the past. Her accomplishments are impressive and seemed unattainable to past generations of our parents and grandparents. Although many believe our whole race never goes outdoors, she is expected to be confirmed by the Senate as President Trump’s Director of Fish & Wildlife at the Interior Department.

Ms. Skipwith’s family is from Columbus, Mississippi, where her mother picked cotton and her father joined the Navy at the height of the Vietnam War and moved the family moved to Indianapolis. This is where Aurelia was born and where her mother and father live to this day.

Her mother teaches school and young Aurelia absorbed her mother’s belief that education was the key to one’s dreams. She spent her summers in Mississippi caring for the hogs and hunting dogs on her grandfather’s farm, she did well in school, and was admitted to Morehead State, a Historically Black College in Kentucky. Her work won her a full scholarship to Howard University in Washington, D.C. where she earned her bachelor’s degree. Then came a master’s from Purdue and a law degree from the University of Kentucky.

In 2005 she moved to St. Louis, Missouri, to work for Monsanto, winning numerous awards before leaving to work for the US Department of Agriculture and the Agency for International Development before setting up her own firm. Wherever she’s worked, her colleagues have recognized her for her extraordinary abilities and work ethic.

In 2016, however, Ms. Skipwith committed a cardinal sin in the eyes of some blacks.  African-Americans who don’t blindly support the Democratic Party are suspect. Aurelia campaigned for and voted for Donald Trump and after he was elected she won an appointment as Deputy Assistant Secretary of the Interior for Fish, Wildlife and Parks. She also got a nomination in 2018 as Director of the Fish and Wildlife Service at Interior. The Senate failed to confirm her before that Congress adjourned so in July of this year the president reappointed her.

Senate Democrats peppered her with questions in a vain attempt to find some conflict or personal foible that would allow them to scuttle the nomination. They requested copies of every email, every meeting she has had in the Trump Administration. A smart, qualified African-American Republican woman, a Trump supporter who can express herself is their nightmare. How dangerous are blacks like former Rep. Mia Love and Supreme Court Justice Clarence Thomas? Better to claim the Republican Party is not diverse, doomed to the footnotes of history as a racist Klan.

Ms. Skipwith was introduced at her confirmation hearing by Congressman William Lacy Clay of St. Louis in whose district she has lived for years and with whom she has worked. Mr. Clay is an African-American Democrat who assured the members of the Senate Environment, Water and Public Works Committee that “she cares; she listens, and she works hard for the American people” and described her journey from poverty to the post for which she had been chosen as “a true success story.”

The white, liberal senior Democrats on the committee were unimpressed. Aurelia Skipwith, however, has spent a lifetime overcoming prejudice and did so again. She did not whine or claim she was being mistreated, or that she needed special favors. After much effort, she was voted out for Senate floor consideration -- on a party line vote. Luckily, the Senate is run by Republicans. When confirmed by the full Senate she will become the first African-American to head the Fish and Wildlife Service. As Congressman Clay told the committee, “This is a historical nomination. We encourage our little black girls to take the road less travelled and embrace science, technology, engineering and math a field that is male dominated … she is the embodiment of what we instruct our children to do and be – educated, hardworking, excelling in their designated profession and contributing good to the world.”

Aurelia Skipwith will stand as a role model for young African-American women as one who took it upon herself through hard work to continue her hard science education and to triumph in a male … and white … dominated profession. Her success stands as a living refutation of the oft-repeated mantra of the Left that holds that the only way young African-Americans can possibly succeed is as subservient supporters of big government.

As Aurelia Skipwith summed up her testimony before the Senate, “I sit here today, a product of the American Dream.” No one could have said or lived it better.

It's long past time that Democrats allow her nomination to go to the floor for an up or down vote. This great-granddaughter of slaves deserves no less.