Patriots Do Not Storm Their Nation's Capitol

Neil Patel
|
Posted: Jan 08, 2021 12:01 AM
Share   Tweet
The opinions expressed by columnists are their own and do not necessarily represent the views of Townhall.com. 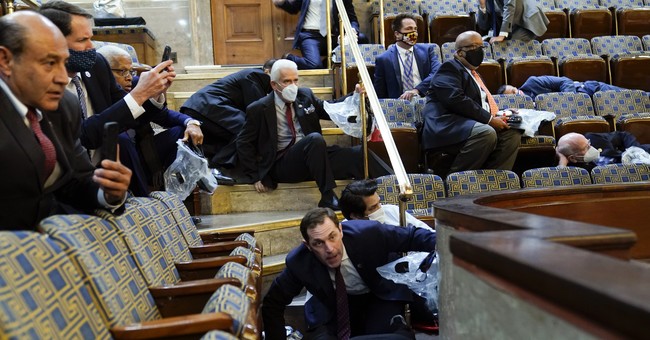 Editor's note: The following column was co-authored with the Daily Caller editorial board.

Patriots enlist and defend their country. They work hard, do their best, raise good families. They help their neighbors. They perform civic duties. They grit their teeth and pay their taxes. Then they show up and vote. They compete, they win or lose, but they do both with grace. These are some of the things patriots do.

Patriots do not storm their own Capitol over a lost election. They do not bum-rush members of Congress. They do not assault strangers. They do not push and shove police officers and trash federal buildings. These are things criminals do, and criminals of any political stripe deserve one thing: the rule of law.

While Congress convened Jan. 6, 2021, to certify the electoral votes for President-elect Joe Biden -- an act that has been performed, for the most part throughout history, peacefully and without incident -- the city outside swelled as tens of thousands of protestors whipped themselves into a #stopthesteal frenzy. Eventually, many of them descended on the Capitol building, hellbent on disrupting the American constitutional process.

As this summer's political protests escalated into rioting and lawlessness, many of us pointed out how unacceptable that was for any reason. This situation is no different. Every single one of the people who stormed that building and participated in that rank, un-American lawlessness should be in jail. There are prodigious photos and video evidence. Law enforcement officials should find them and prosecute them, all of them, no exceptions.

The reason why is simple: The peaceful transfer of power is a hallmark of Western democracy. It is the cornerstone of everything we love. It is apple pie. It's lining up and shaking hands when the clock hits zero. We have ways to resolve political disputes, including election disputes. What happened in Washington is not on the list. If we want to end the cycle of political violence -- and it has become a cycle -- now is the time to set the precedent.

The left excused this summer's rioting as "mostly peaceful." The same could be said of the events in Washington. It's irrelevant. "Mostly" is not the standard to which we should aspire. Political violence is wrong. Period. This was true in 2016 when the #NotMyPresident rioters disrupted the Trump inaugural, and it's true today. Rule of law is an essential element of our peaceful transition of power. The people who stormed that building do not represent the vast majority of America.