The Trillion-Dollar Bailout May Change Our Politics Forever

Neil Patel
|
Posted: Mar 21, 2020 12:01 AM
Share   Tweet
The opinions expressed by columnists are their own and do not necessarily represent the views of Townhall.com. 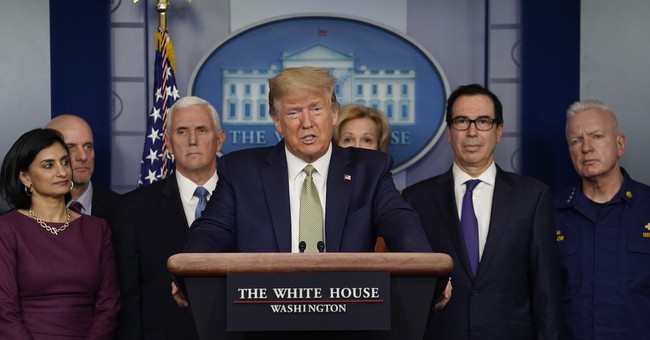 As members of Congress debate the terms of the trillion-dollar-plus coronavirus relief package for businesses and individuals, they would do well to remember our recent history.

Most people in professional Washington hate the populist era we are going through. The populist period exists because Americans already feel like their elected officials are more responsive to large corporate interests than to the individuals who elected them. This played out big-time after the Wall Street bailouts fueled the tea party on the right and Occupy Wall Street on the left.

People on the left and right agree that some government assistance is needed to avoid an economic catastrophe. On the individual level, many people with little savings have already lost jobs. Many more will. The best policy is likely just direct payments from the government targeted as quickly as possible to those most in need. It's going to cost a ton and comes with a huge downside down the road, but it's also hard to argue that we don't need it. That's actually the easy part.

On the corporate side, things get more complicated. People see empty airports, empty restaurants and closed-down businesses. They know many industries are suffering. People also don't want to throw our economy into a crisis. They will support a bailout, but if they later learn that the corporate world got anything that looks like a sweetheart deal out of this crisis, the political retribution will be overwhelming. Go ask the many members of Congress who lost seats in the wake of the financial crisis bailout. That was before this populist era even started.

Right this minute, there are teams of lobbyists trying to get all they can for their industry clients. It's their job. They are good at it. They understand the complicated issues more than anyone else, and they know the members of Congress and their staffs.

Sitting across the table will be the members of Congress (or, more likely, their staffs), who are supposed to represent the American taxpayers during the ongoing negotiations. They share the same worldview. Together, they will define the terms of the bailout, and it will likely be so complicated that it may take weeks, or even months, for the rest of us to know exactly what they did. Too many taxpayers feel like their elected officials are not looking out for their interests first at moments like these. The deals often come out looking too sweet for politically connected companies. If that happens, we will be saying hello to our first socialist president sometime down the road.

There are also sound substantive economic reasons for Congress to responsibly structure the coronavirus relief. We enter this crisis already having a huge debt problem on our hands. There is a strong policy case to be made that our exploding debt is the greatest long-term challenge our country faces. We are most likely burdening our coming generations with a weaker country in a way no prior American generation ever has. Although we need relief now, we must structure that relief in a way that minimizes the long-term hit to our country's finances.

For these political and economic reasons, members of Congress from both parties should be able to agree on the following basic requirements for the coming bailout.

The money should come as a line of credit that can be drawn down as and when needed by eligible companies up to a certain maximum. The companies that take these loans should have to pay interest kicking in at some defined point and increasing over time as our economy recovers. The government credit needs to be senior to any other credit that the accepting company has issued. In other words, if things go bad, the American taxpayers are the first who should be paid back with whatever assets remain. The credit needs to be backed by equity in the borrowing companies. This may dilute the current shareholders, but that's only fair. The economic pain we may face going forward must be felt by shareholders first. They reap the profits during good times. If you believe at all in markets, then they have to be the first to feel the pain on the other side.

Finally, there has been a lot of debate about stock buybacks and executive compensation. Those who believe in free markets likely view these sorts of issues as best decided between shareholders and management of the companies themselves. It's annoying to see mediocre CEOs walk away with shocking compensation packages after mismanaging their companies. It's also annoying that these huge companies buy back their own stock to increase the stock price when they could be using those funds to invest for the future or prepare for a catastrophe like the one we are now facing. On both these matters, those of us on the free market side generally feel that it's the shareholders money, and if they want to waste it, that's their problem. If you don't like these strategies, don't buy the stock.

Once companies turn to the American taxpayers for a bailout, however, things start to change. Restrictions on compensation and stock buybacks are reasonable to the extent that they protect the taxpayer. Put another way, it's hard to plead for free market fundamentalism as you ask for a taxpayer bailout. More importantly for members of Congress, as a political matter, if they don't make it clear that they are putting taxpayers first at every moment during this crisis, they are likely to pay a huge price in future elections.

Neil Patel co-founded The Daily Caller, one of America's fastest-growing online news outlets, which regularly breaks news and distributes it to over 15 million monthly readers. Patel also co-founded The Daily Caller News Foundation, a nonprofit news company that trains journalists, produces fact-checks and conducts longer-term investigative reporting. The Daily Caller News Foundation licenses its content free of charge to over 300 news outlets, reaching potentially hundreds of millions of people per month. To find out more about Neil Patel and read features by other Creators writers and cartoonists, visit the Creators website at www.creators.com.