Myra Kahn Adams
|
Posted: Jul 27, 2018 12:01 AM
Share   Tweet
The opinions expressed by columnists are their own and do not necessarily represent the views of Townhall.com. 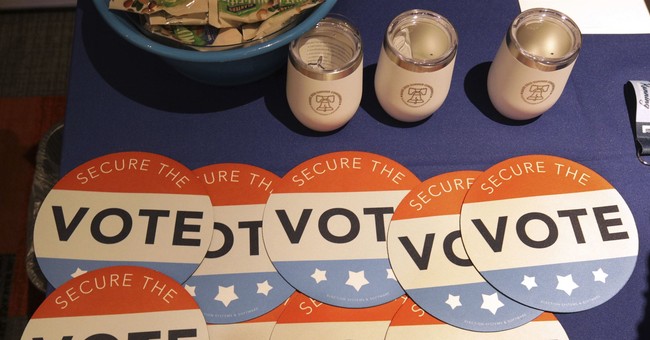 Last week I was ignored. It happened while I was eating an organic salad on the patio outside my local Whole Foods situated in the second largest county in the nation’s most ferocious battleground state.

Why was I ignored by the white middle-aged woman carrying a clipboard wearing a “Register-to-Vote Here” T-shirt who was standing only six feet away?

Was I ignored because I am a white female over age 50? Was I ignored because I was wearing a cross? Those questions swirled around my brain as I observed the clipboard lady ask everyone who walked between us if they would like to register — except me. (At that time all who entered Whole Foods happened to be younger or had darker skin.)

As I was munching my arugula, several times we made eye contact, but she never bothered to ask.

After about 15 minutes, lunch was finished, and the silent political standoff ended. Walking to my car, I assumed that she thought I looked “Republican” and was already registered. Both assumptions would have been correct. However, as an American, I was troubled by her overt partisanship. But honestly, by her looks and hair, I assumed she was a Democrat and must still be lamenting Hillary’s 2016 loss and anticipating Elizabeth Warren in 2020.

This incident has far greater implications than me being ignored after making Whole Food owner Jeff Bezos 12 bucks richer. The point is voter registration is generally perceived as a Democratic Party activity based on the assumption that everyone young and non-white represents a future Democratic vote.

Unfortunately for Republicans, age 18 – 29 voting patterns and party identification data turn that assumption into a reality.

But, before I discuss the data, here is an illuminating NBC News report dated July 9 with the headline:

Within the article about the Republican National Committee is this paragraph:

The RNC reports a “total 487 million contacts it says it has already made this cycle, including emails opened (250 million), calls made for data gathering purposes (183 million), digital petitions or surveys completed (19 million), direct mail sent (9.6 million), and get-out-the-vote calls made (5.6 million).”

Missing from the report, which justifies RNC Chairwoman Ronna McDaniel’s enthusiasm and optimism about the midterm elections, are two words, “voter registration.”

The words are absent because the RNC knows it is facing an uphill battle of cultural and demographic change. The 2016 presidential data paints the picture.

According to exit polls, voters aged 18 – 29 voted for Hillary Clinton by a margin of 55 to 36 percent over Trump. Worse for the GOP, non-white voters supported Clinton over Trump by a lopsided 74 to 21 percent.

In the 2012 presidential election between President Barack Obama and Mitt Romney, exit polls found that Obama won 18 – 29 year-olds by 60 to 37 percent. Obama earned five percentage points more youth vote than Clinton won in 2016, while the GOP youth vote stayed basically the same from 2012 to 2016 — decreasing by only one point to 36 percent. The African American vote in 2012 went 93 percent for Obama while he captured 71 percent of the Hispanic vote compared to 27 percent for Romney.

An old axiom in Republican politics is, “Go duck hunting where the ducks are,” and precisely why a February 2018 press release by the Democratic National Committee was headlined:

That is a headline you will likely never see from the RNC because Republican “ducks” are not reproducing.

Moreover, when it comes to registering new voters, Republicans have no counterpart to youth groups like “Rock the Vote,” that bills itself as “a nonpartisan nonprofit dedicated to building the political power of young people.” Their home page reads, “Our generation is getting screwed by a broken system and leadership that don’t represent our values.” Along with, “We choose to fight. We choose to vote. Join us.”

Although “non-partisan” in theory, Rock the Vote is not aiming to register hordes of young Republicans. Therefore, it’s no surprise that Rock the Vote is the muscle behind "Vote for Our Lives." This new group is an off-shoot of the activist, anti-NRA, Marjory Stoneman Douglas High School student group that organized the successful, “March for Our Lives” in Washington D.C. with sister marches around the nation and that is now touring the USA this summer registering young voters.

Also joining the “duck hunt” is Michelle Obama, as reported on July 19 in the Washington Post:

“The former first lady on Thursday announced her involvement as a co-chair of When We All Vote. The nonpartisan, not-for-profit organization will work online and in person to help register anyone who wants to vote in the fall, when Democrats hope to ride a wave of anger among liberal voters against President Donald Trump’s policies on immigration, health care and other issues to take back control of the House and Senate.”

It looks as if voter registration is the new cool, hip activity, but for Democrats only.

Conversely, Republican leaders are always comforted knowing that older, white voters will turn out for the midterms in higher rates and save the party, while younger and non-white voter turnout has traditionally amounted to empty hype.

Will 2018 be the year that this tradition is turned upside down? Will anti-Trump fervor set new turnout records and squash the GOP with all these new, young, non-white “motivated” voters?  Watch exit polling on November 6 for the answers.

But remember, older Republican white voters like me will not be ignored, even when we choose to patronize “enemy territory” such as Whole Foods because, like the motto of Rock the Vote, “We choose to fight. We choose to vote.”