Mona Charen
|
Posted: Jul 06, 2017 12:01 AM
Share   Tweet
The opinions expressed by columnists are their own and do not necessarily represent the views of Townhall.com. 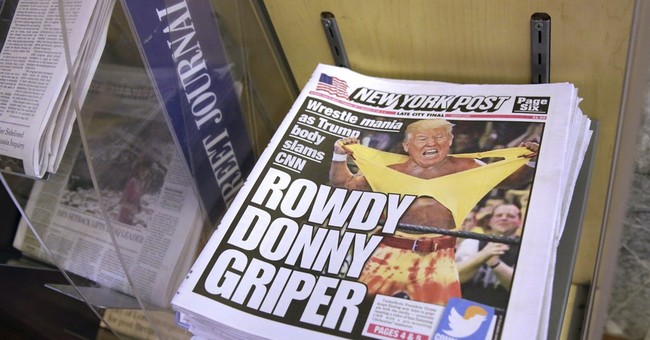 CNN is not wrong that the president of the United States ought to stop behaving like a clown. But they overshot this week.

As someone who has about the lowest possible tolerance for Trumpian vulgarity, I thought the imbroglio over the CNN logo gif was overwrought. This was an invitation to violence? Look, we know that Trump is not above stoking violence. He encouraged it more than once at his rallies. But the GIF? The original WWE clip was a joke. Superimposing the CNN logo on the face of Vince McMahon was a joke on top of a joke. It was bad taste, but not incitement.

CNN, not unlike Mika Brzezinski and Joe Scarborough, laughs all the way to the bank when Trump tangles with them. Like him, they're in the eyeballs business. They might even subscribe to his philosophy that "all press is good press." When he takes aim at them, it provides fodder for hour after hour of self-promotion disguised as news analysis. During the campaign, they earned eyeballs by lavishing (generally positive) coverage on him. Now that he's president, they keep ratings up by denouncing him. Either way, it's good for CNN.

The deep investigative report into the origins of the GIF, however, makes CNN look vindictive and petty. Just as Trump ought not to "punch down," neither should CNN. The network claims that the GIF's originator had also posted racist and anti-Semitic material in the past, and then issued a statement saying that out of concern for the man's safety, they were withholding his identity. They added that the decision was subject to change if he didn't behave himself.

Perhaps the GIF-maker is a racist moron. So what? Are they going to police Reddit now? Maybe that would be good public hygiene, but CNN is going down a rabbit hole here. In order for this to reflect on Trump, they would have to somehow demonstrate that the president was familiar with the previous offensive posts and retweeted the user anyway, which might be true, but seems unlikely and impossible to prove. And now it appears that the GIF-maker CNN found may not even be the right one.

The point, surely, is that the president of the United States spent God only knows how much time scrolling through internet garbage to find this GIF.

With Donald Trump as president, we are living a reality TV show. He is doing what he has always done. He creates cliffhangers: Did he have tapes of his conversations with James Comey? Stay tuned. He picks fights with TV hosts, the mayor of London and even his own party. He sows chaos. He warns. He taunts. He threatens. A staggering percentage of what he says, and instructs his minions to say, is false.

The CNN logo GIF was a joke, but his attacks on anyone who criticizes him are not. His defenders call him a "counterpuncher." But the president of the United States is not a tabloid celebrity trading jabs with other shallow publicity hounds willing to say anything to keep their ratings up.

If Donald Trump the TV star lashes out at Rosie O'Donnell, it's entertainment (if you like that sort of thing). When the president of the United States launches a consistent campaign to delegitimize any news outlet that criticizes him (even harshly) as "fake news," that's corrosive. He has power now. It's the job of the press to criticize him. Respect for the free press is American etiquette, not to mention law. And yes, of course Republicans get more biased coverage from most outlets than Democrats do, but Trump should be able to shrug that off with a joke and a smile. His obsession with his enemies is beyond Nixonian (and remember how well that turned out). As only Sen. Ben Sasse has had the integrity to say, Trump is "weaponizing distrust" in an era when we are already crippled by mutual suspicion.

There is a seemingly inexhaustible well of antipathy toward the "MSM" (mainstream media) in the conservative world. I certainly have shared in it over the years, and probably contributed to it in some fashion. But I just cannot see that Trump's hostility toward the "failing New York Times" and the rest has anything to do with conservatism. It's all personal. He almost never knocks them for biased reporting on health care or regulation or even immigration. He seems hardly to notice anything that isn't about himself.

And so, while CNN did itself no favors this week, the president who cannot see past his own nose has little standing to protest.