Day of the Demagogues

Mona Charen
|
Posted: Feb 11, 2016 12:01 AM
Share   Tweet
The opinions expressed by columnists are their own and do not necessarily represent the views of Townhall.com. 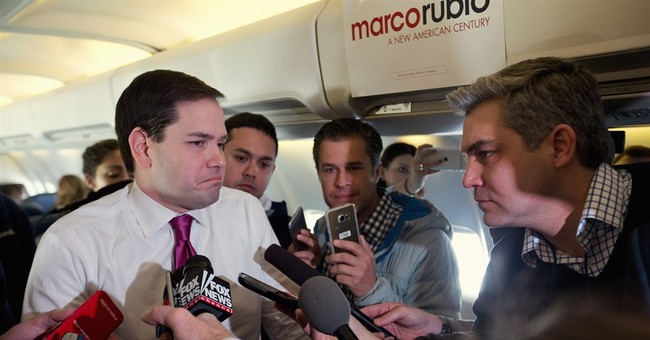 As the results of New Hampshire's primary were coming in Tuesday night, some commentators on Twitter were jubilant about the "disruption": that is, the victories of an inane socialist demagogue and a foul-mouthed nationalist demagogue and what they represented to the "establishment." Yes, mobs are disruptive. Madame Defarge enjoyed a good shakeup herself.

Sen. Bernie Sanders believes that eight years of the most leftist president in American history have left the plutocrats in total control. Channeling the late Hugo Chavez, he promises to lift the minimum wage to $15 per hour, provide free college educations for all and deliver universal health care (with only a small tax on the middle class). How will he pay for it? "With a tax on Wall Street speculation."

Now, I'm no particular fan of Wall Street, but this is rubbish. Sanders bellows: "The greed, the recklessness, and the illegal behavior drove our economy to its knees. The American people bailed out Wall Street, now it's Wall Street's time to help the middle class." Without defending bailouts (and if you want an excellent history of how the government encouraged risky behavior by bankers, see "Gambling With Other People's Money" by Russ Roberts), let's remember that in 2008 the banks were given loans, not bailouts, and the purpose was not to support billionaires but to head off what Congress had reason to fear was a total freeze up of the financial system. Maybe they were wrong, but Congress was genuinely terrified that without a quick infusion of government money, there could be a full-scale liquidity crisis, i.e., when you and I went to our ATMs, we'd get an error message.

If you'll indulge another objection to the greedy-bankers-robbing-the-middle-class tale, the banks paid back the "bailout" money (with interest) as Jim Geraghty of National Review reminds us. Further, while you'll never hear this from Bolshie Bernie, it wasn't private greed that created the financial crisis but government coercion and incentives that encouraged lending to "non-traditional" (i.e., non-creditworthy) customers. There's more to say on this, like the fact that many of those sainted middle-class victims of the financial crisis were actually house flippers who made risky bets. That's not to say many innocent people were not hurt. But spare us these black/white morality tales. Oh, and Sen. Sanders: Even if you confiscated all of the wealth of America's "billionaire class" (what a ridiculous term for a few hundred individuals), you wouldn't come close to the $17 trillion in new spending you've proposed.

Meanwhile, the Dodd-Frank bill that was supposed to be the cure for what went wrong in 2008 -- the bill the Democratic House and Senate passed and Obama signed -- is a big cause of our anemic growth now. The big banks have done OK with the thousands upon thousands of new regulations. In fact, they've gotten even bigger. But medium and small banks, the ones who typically finance new ventures and thus create new job opportunities, are going under. The ones that remain are actually discouraging new deposits. That's right. They can't lend out the money because of the strictures of Dodd-Frank, so they don't want new money. An employee at one of the surviving banks told me that she now spends about 30 percent of her time on Dodd-Frank compliance. What would she have done with that time otherwise? "Helped our clients to become more efficient." Businesses that are more efficient are more profitable. More profits equal more employment. Profits -- shh, don't upset the Democrats -- are good.

Not that the leading contender for the Republican nomination grapples with any of these questions. Like Sanders, he's not interested in reform so much as looking for scapegoats. Sanders blames greedy billionaires for the problems of the middle class and the poor; Trump blames treacherous immigrants, crafty foreigners and incompetent leadership in Washington. Some people seemed surprised that there was overlap between Sanders and Trump supporters, but it makes perfect sense.

Some commentators on the right, particularly on talk radio, have ridden the hobbyhorse of immigration very hard -- even to the point of welcoming Trump's rise as a ratification of their fixation. But in Iowa, immigration was rated important by only 13 percent of GOP caucus participants. In New Hampshire, only 15 percent said it was important to their vote. Terrorism, government spending and the economy all ranked higher.

Trump and Sanders are disruptive, and people who welcome chaos for its own sake are dangerous. The Founding Fathers of this country were extremely wary of excessive power -- whether in an executive or in a mob. They designed the system to be stable and somewhat resistant to every shift in public mood, and it has served us very well. But the voters are the ultimate custodians of the American system, and by turning to demagogues in both parties, they've ventured into scary terrain.

Here is Biden’s Schedule for the Weekend
Katie Pavlich
The Goalposts Keep Moving: CDC Director Says the Definition of Fully Vaccinated May Change
Leah Barkoukis
Biden State Department Admits: We're in Touch with Hundreds of US Citizens Stranded in Afghanistan
Guy Benson
This Is Who Dr. Fauci Blames for the Rise in Deaths Among Adults in the UK