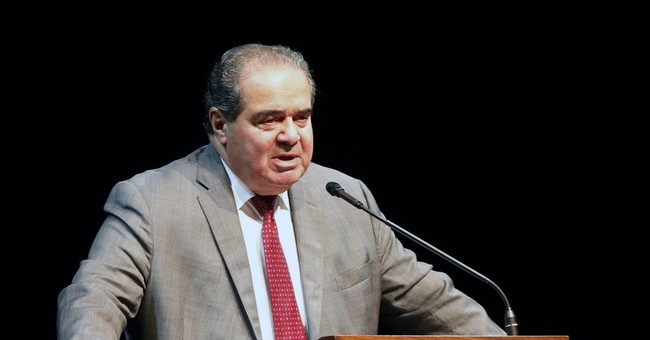 There are few more repugnant spectacles among the liberal elites of this country than the festival of smugness that follows any comment by a conservative public figure that can be twisted into a racial slight.

This week it is Justice Antonin Scalia's turn. In an oral argument over affirmative action, Scalia said:

"There are those who contend that it does not benefit African-Americans to -- to get them in the University of Texas where they do not do well, as opposed to having them go to a less advanced school, a less -- a slower track school where they do well."

Sure, maybe Scalia should have said "some" African-American students, but frankly, he shouldn't have to. After a career in public life, he doesn't need to prove his bona fides to anyone. Everyone is, in effect, on notice that this brilliant jurist is the farthest thing from a racist.

But you know this game works. A conservative says something that can be misinterpreted, and the self-righteous, bad-faith denunciations pour out like sewage in a flood. On "Meet the Press," Ted Koppel compared Scalia to the hapless Al Campanis, and said:

"I was thinking both of them have the same problem. It's generational. He really doesn't think he is saying untoward. This is the kind of thing that someone of Antonin Scalia's generation has been saying all his life. Al Campanis did the same thing. But the key thing is being a Supreme Court justice means never having to say you're sorry."

The rest of the crew on MTP chimed in with similar head shaking and invocations of bad popular fiction. Now, leaving Campanis aside (I have my doubts that he was a racist either; he got caught up in one of America's fits of righteous indignation), who does Koppel think he is? First of all, he's almost exactly four years younger than Scalia, so spare us the generational snobbery. Second, he (like the other panelists) is clearly unfamiliar with the argument Scalia was referencing. Molly Ball of The Atlantic, Gerald Seib of The Wall Street Journal, Helene Cooper of The New York Times and, of course, Chuck Todd himself all expressed regret that Scalia can "get away with it" and noted that this explains why he opposes cameras in the Supreme Court.

Who pays these people for their commentary? This is risible. Supreme Court oral arguments are fully available to the public in print and audio form. Is Scalia trying to hide his racism by having it only unavailable on video? Quite a strategy.

The usual people issued denunciations and everyone had a good "two minutes hate," as George Orwell might have put it.

But Scalia has nothing for which to apologize (though his critics do). He was referring to a perfectly plausible theory about the effects of affirmative action. He was not saying that all African-American students are slower than others, merely that the widespread practice of accepting black students into colleges with much worse grades and scores than the majority of students has certain unfortunate effects. As Stuart Taylor Jr. and Richard H. Sander explain in their book "Mismatch: How Affirmative Action Hurts Students It's Intended to Help, and Why Universities Won't Admit It," there is a good deal of evidence (and more has been produced since the book's publication) that black students who "benefit" from affirmative action in admission, and thus attend schools for which they are less prepared than their peers, are less likely to major in difficult but remunerative subjects such as engineering and science, more likely to wind up in the bottom 10th of the student body, and, most important, less likely to graduate than their peers.

What the "Mismatch" authors and others have described as the "cascade effect" means that at every level of college except for the very top, black students are more likely to attend colleges for which they are unprepared and thus many are set up to fail. That might be important, right, Ted Koppel?

One of the most telling statistics that is rarely mentioned in this debate comes from California, where Proposition 209 banned racial preferences by law in 1996. Advocates of affirmative action note that minority enrollments dropped thereafter. Yes, but graduation rates increased.

Perhaps the mismatch theory is wrong. Perhaps the benefits of attending more prestigious schools than you are prepared for outweigh the disadvantages (though this leaves unaddressed the constitutional problem of discriminating by race at all). But surely this is a worthy debate for people of goodwill to have.

If we had people of goodwill.