'Nothing to do With Islam' 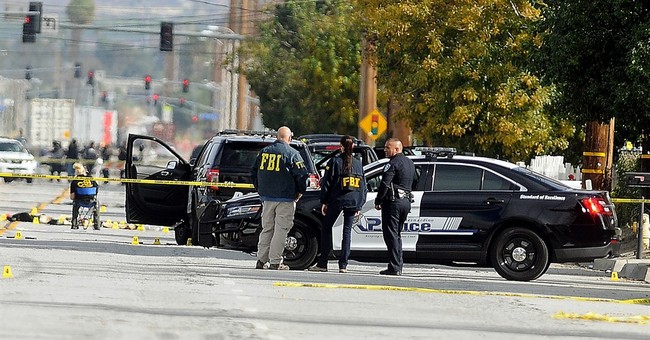 Trending
In the aftermath of Paris and before San Bernardino, Hillary Clinton articulated the forced catechism of the left: "Let's be clear: Islam is not our adversary. Muslims are peaceful and tolerant people and have nothing whatsoever to do with terrorism."

What happens when a major political party becomes so wedded to political correctness that it feels constrained to deny reality? Clinton could hardly have chosen a less opportune moment to squeeze her eyes shut about the threat of Islamic extremism, a threat that is glaringly, blazingly obvious.

The first part of what Clinton said was true. Islam is not our adversary. There are an estimated 1.6 billion Muslims in the world, and if all of them were violent extremists, we'd have a planet drowning in blood. Most Muslims are peaceful. Beyond that, they practice charity, care for the sick and encourage good works.

But there is a fever sweeping the Muslim world that has infected a significant minority of Muslims -- and because Muslims are so numerous, that minority amounts to hundreds of millions. It began in the 1920s with the Muslim Brotherhood. Its Shia incarnation has captured the government of Iran. Saudi oil money has facilitated its spread to places such as Pakistan and Afghanistan. President Obama, deluded from the get-go that our enemy was not Islamic extremism but merely "al-Qaida," stood by while the Islamic extremists in Iraq and Syria morphed into a new entity called ISIS. Obama never saw it coming because he was determined to believe, with Clinton and other Democrats, that terrorism has nothing to do with Islam.

Isn't it odd, then, that in Nigeria (70 percent Muslim) and Lebanon (54 percent Muslim) large majorities say they are "very worried" about Islamic extremism in their countries? The presence of Boko Haram in Nigeria and Hezbollah in Lebanon has a way of concentrating the mind. People around the world are worried about Islamic radicalism, too. Perhaps they are mindful of 9/11, the Fort Hood shooting (2009), the Boston Marathon bombing (2013), the bombings of trains in Madrid (2004), the three-day siege of hotels and a Jewish center in Mumbai (2008), the bombings of a bus and trains in London (2005), the attack on a Jewish school in Toulouse (2012), the slaughter of students at a Kenya university (2015), the attack on high schoolers in Peshawar, Pakistan (2014), the shootings at a Mali hotel (2015), the stabbings in Israel (2015), the Bali bombings (2002), the Jakarta bombing (2009) and so very many more, to say nothing of the treatment of religious minorities, homosexuals, and women in many Muslim societies.

As for whether Muslims are tolerant, there's no doubt that some are, but as a 2013 Pew survey of global attitudes found, 88 percent of Egyptian and 62 percent of Pakistani Muslims favor the death penalty for apostates. "This is also the majority view among Muslims in Malaysia, Jordan and the Palestinian territories," reported the Washington Post after reviewing the data.

We Americans congratulate ourselves for our comparatively superior ability to assimilate Muslim immigrants into our society, and perhaps we deserve the pat on the back. Then again, we have nothing like the numbers of Muslim immigrants Europe does, and the percentages matter. Even among American Muslims, 7 percent told Pew in 2011 that "suicide bombing or other violence against civilians is justified to defend Islam against its enemies sometimes." One percent said "often" and 5 percent said "rarely." Eighty-one percent said "never." Those responses were not very different from the views of Turkish and Indonesian Muslims.

Islam is in the throes of a religious war. The primary victims are other Muslims, but thousands of Christians, Jews, Hindus and others have been bloodied by it as well. Obama told Christians not to get on "our high horse," referring to the Crusades. Yes, when Christianity was about the age that Islam is now, it too was engulfed in righteous violence (Protestants versus Catholics). The West is long past it. They're not. If another civilization had been able to exert influence over Europe in the 1500s and 1600s to quell the violence and encourage the "better angels" of the society, it would have been no bad thing.

As for today, we owe it to ourselves to be alert to the obvious threat that radical Islam poses to the people of the Middle East (primarily) and to the rest of us. Radicalism has had the wind at its back in the Muslim world for nearly a century. It shows no sign of abating just because Clinton and company bury their heads in the sand.