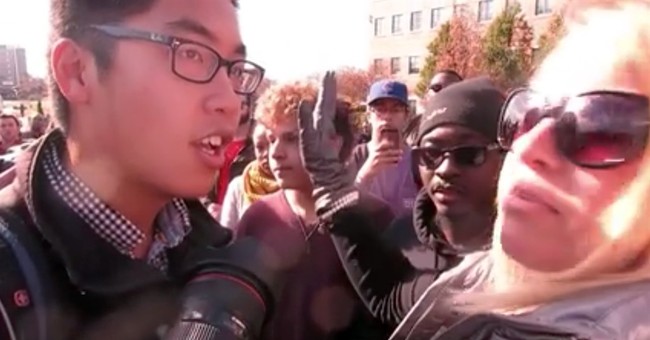 Demand is the key word. It marks the essential authoritarianism at work here. At the University of Missouri, students "demanded" that (now-former) university President Tim Wolfe write a "handwritten" letter of apology acknowledging his "white, male privilege." Among his alleged sins was apparently not doing enough to shield so-called "marginalized students" from feeling upset after a black criminal, Michael Brown, was killed by the police officer he had assaulted. Another sin was driving away when a mob surrounded Wolfe's car at homecoming festivities. Wolfe has since apologized, groveled ("my apology is long overdue") and resigned. Good riddance.

Events at the University of Missouri were a perfect American storm: the confluence of fascistic student and faculty behavior, viral rumors of white racism and the almighty dollar. That's right, the dollar, because as an American university administrator, you can offend every principle enshrined in the Bible and the U.S. Constitution, you can make a mockery of higher education by offering courses on Martha Stewart's whiteness or "Fifty Shades of Gray," but don't mess with the football team. That's where the real power resides. When the black football players threatened to boycott this weekend's game against Brigham Young, the university president had to go.

There has been some tut-tutting, even among liberals, about modern university students' hypersensitivity. But let's not kid ourselves -- though it is couched in the language of safety, what these little snowflakes want is repression. Brenda Smith-Lezama, for example, is vice president of the Missouri Students Association. Asked about efforts on the Missouri campus to "muscle" student journalists away from a public event, she offered a view that would make Castro proud: "I personally am tired of hearing that First Amendment rights protect students when they are creating a hostile and unsafe learning environment for myself and for other students here," she told MSNBC.

An ideological fellow traveler at Yale screamed obscenities at a faculty member. That alone ought to be enough to ensure her dismissal from the college -- or at least some degree of punishment. But no. Background: Erika Christakis, a professor's wife and a lecturer in childhood education, had written an email suggesting that students should be able to use their own judgment about Halloween costumes. On such mighty issues do our finest minds now cogitate. Students confronted the professor on campus. One student screamed that it was the faculty's job to "create a place of comfort and home" for students (comfort, that is, being defined as insulation from challenging ideas). He demurred. "Then why the f--- did you accept the position?" she bellowed. "It is not about creating an intellectual space!"

Congratulations, Yale, and Missouri, and American academia in general, you've succeeded in undermining the ethic of free inquiry, disinterested scholarship, and certainly anything like decent manners.

The target of that vulgar outburst has now executed a full kowtow. He invited students to his home and prostrated himself: "I care so much about the same issues you care about. I've spent my life taking care of these issues of injustice, of poverty, of racism. I'm genuinely sorry ... to have disappointed you. I've disappointed myself."

Yeah, we're all disappointed in you, fella. As for the screamer, she'll suffer no ill effects, and is probably already fielding job offers from MSNBC.

The truth is that universities are and always have been ripe environments for absolutism. Students -- brimming with self-righteousness, unaware of how easily violence can spread, stimulated by the scent of blood in the water -- have provided the shock troops for most totalitarian movements.

During what liberal academics praised as the "idealistic" 1960s, American students (sometimes armed) seized buildings, held a dean hostage, looted research files and committed promiscuous vandalism. Nazi students (egged on by professors) "cleansed" Heidelberg and other universities of Jews and others. Russian universities became incubators for radicals who took their ideas into the streets. During the Cultural Revolution, Mao's faithful pupils subjected their teachers to "re-education" and even occasionally cannibalized them.

Students are natural radicals. The job of academics in a free society that hopes to remain so is to instill respect for freedom of thought and expression. Our problem is that many of the students who were burning professors' research notes in the 1960s are now on the faculty.