Happy Fourth Despite It All 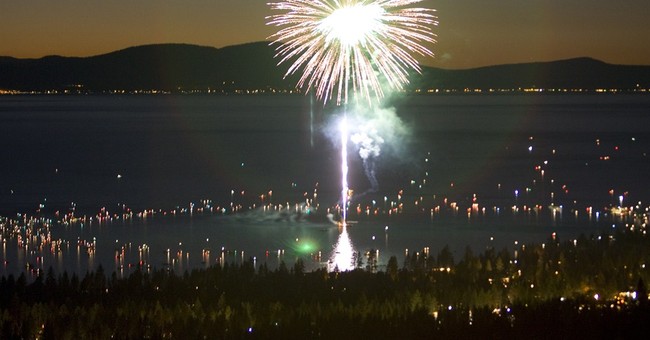 On July 4, I plan to celebrate this nation's birth with something approaching devotion. I will so despite the fact that each day's news brings fresh reasons to worry about the future.

I could list the things that worry me, but you know what they are. They probably worry you, too, but the Fourth of July is a time to elevate and celebrate rather than fret. So here's a story:

Last week, I was in Europe and had dinner with a European gentleman. He is very successful and pretty happy with his lot. As sometimes happens when people of different cultures speak, I didn't understand something he was telling me. He kept emphasizing how important it was, when he was young, that he be good at sports, because he was an immigrant to the country he grew up in. I was a little slow to see the relevance of this, until at length, I got the picture. As the son of immigrants to Germany, he wasn't accepted by his peers. He felt his outsider status acutely. Excelling at soccer gave him some measure of acceptance.

We are again embroiled in a domestic fight over immigration policy. The Obama administration is confronting the consequences of its unilateral decision to grant permanent residency to the children of illegal immigrants as a wave of unaccompanied minors is dropped at our borders. Characteristically, President Barack Obama sees the problem not as a) something his own policies created or b) something he must grapple with as leader of the nation in a conscientious fashion. No, he sees it just as an opportunity to score political points against Republicans.

But putting all of that aside for the moment and thinking back to my "German" dinner companion, our American capacity to adopt immigrants and accept them as fully American remains remarkable and probably unequalled anywhere in the world. It's a confirmation of the cliche that you cannot become French, Irish or Italian by immigration. You'll always be viewed as a transplant. But anyone from anywhere can become an American. What defines us is not language or ethnicity or religion but a shared dedication to certain propositions. I can't prove this, but I suspect that even the most die-hard opponent of illegal immigration would be generous and open to any legal immigrant who happened to cross his path. He'd make an effort to pronounce his name correctly and would ask about his family. In fact, that die-hard would probably be kind even to a known illegal, because most Americans are generous. Welcoming newcomers is written into our DNA.

If anything, we've leaned too far in recent years toward multiculturalism and separatist identities. Some of our thought leaders appear to think it's presumptuous to teach our ways to immigrants -- though most immigrants are eager to assimilate and sacrificed much to join us. The liberal project to make Americans adapt to immigrants rather than the other way around is one of the reasons some Americans balk at increasing immigration.

Charles Murray argues in his short monograph for the American Enterprise Institute that American exceptionalism is composed of four elements that, taken together, constitute the unique civic culture of the nation. The four traits are industriousness, egalitarianism, religiosity and community life.

Religious belief and engagement are declining but remain relatively strong. A Harris poll found that 23 percent of Americans describe themselves as "not at all religious" in 2013, almost double the number who said that in 2007. The percentage of Americans who profess a belief in God (74) remains significantly higher than most European nations. Seventy-three percent of Frenchmen told Gallup in 2007-2008 that religion is not important in their lives, along with 63 percent of Russians, 71 percent of the British and 59 percent of Spaniards.

Industriousness is strained by the deadening hand of the regulatory state, but remains more robust than in other countries.

Egalitarianism, by which Murray means the belief that each person is of equal worth, whatever his income or family, remains a firm conviction.

And civic engagement, though shouldered aside in a thousand ways by the vast octopus of government, continues to chug along, creating associations, committees, councils and clubs to improve life for all. Out of curiosity, I Googled "English as a Second Language" classes in my area and discovered a vast network, including ESLIM (English as a Second Language and Immigrant Ministries), a program of the Methodist Church, the Northern Virginia Community Colleges and many others.

Worth some fireworks, I'd say.