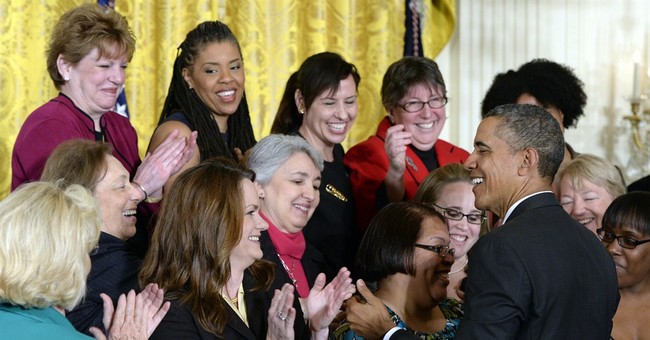 The screeching polarization of American political and cultural life in recent years is exacting a toll. Debate has been debased. Contempt and hatred for those with opposing views is now the norm. While some on the right have criticized their own side -- think of Rick Perry and Jeb Bush challenging immigration opponents, or conservative columnists taking on some talk radio hosts -- liberals have been shamefully silent about the excesses committed by Democrats.

That's why it gives me particular pleasure to report that two liberal columnists have recently defied this trend. One is my old friend and sparring partner Ruth Marcus (we've known each other since the fourth grade) of the Washington Post, and the other is Nicholas Kristof of The New York Times.

Under the headline "Democrats' revolting equal-pay demagoguery," Marcus writes, "It is simultaneously possible to believe that women are entitled to equal pay and to not support the Paycheck Fairness Act." Marcus blasted the president for saying, "I don't know why you would resist the idea that women should be paid the same as men," and Sens. Harry Reid and Debbie Stabenow for similar pandering. Noting that she supports the Paycheck Fairness Act, Marcus continued, "But the level of hyperbole -- actually, of demagoguery -- that Democrats have engaged in here is revolting."

Though he apparently could not resist seeding his praise with little poison pellets, Kristof, too, has taken a step toward social comity by acknowledging that conservatives "have been proved right about three big areas of social policy." Those are: 1) the importance of strong families, 2) job creation, and 3) school reform. Kristof argues that Republican solutions to these problems are all wrong, but his willingness to acknowledge, for example, that "Democrats, in cahoots with teachers' unions and protective of a dysfunctional system, were long part of the problem" is enough to make you rub your eyes and check the byline.

These two pieces are like small shoots of integrity pushing up through cracks in the conformist concrete that has smothered dialogue in recent years.

Next, it would be bracing to see someone on the left side of the spectrum acknowledge President Barack Obama's consistent demagoguery over the past five years. His techniques have included erecting straw men and knocking them down, shamelessly misrepresenting his opponents, and encouraging contempt through ridicule. Conservatives have cried foul, but unless the mainstream liberal press agree, he gets away with it, and the country becomes ever more polarized. From time to time, liberal critics have offered "Pinocchios" to the president or made some mild allusion to his "partisanship," but those are rare exceptions. For the most part, they've demonstrated party discipline the Bolsheviks would envy -- which is a problem, since they're supposed to be independent watchdogs.

At the University of Michigan, Obama suggested that raising the minimum wage was a "no-brainer" except that "Republicans don't want to raise it at all." When the audience booed, the president advised, "Don't boo, organize." He continued: "You've got some Republicans saying we shouldn't raise the minimum wage because -- they said this -- because, well, it just helps young people." Straw man down. No Republican made that argument. They argued the opposite: that raising the minimum wage hurts young people because it makes employers less likely to offer a first job to the unskilled. He knows that.

"Nobody who works full time should be raising a family in poverty," intoned the president. Yet his Census Bureau reported last year that only 2.9 percent of full-time workers are poor. Oh, and 80 percent of those the earning minimum wage are not poor. The man should not be trusted to handle numbers because he plainly cannot use them responsibly.

Last week, celebrating 7 million registrants for Obamacare, the president announced that all was sweetness and light -- except that Republicans were keen to hurt people. The Affordable Care Act is "helping people from coast to coast," Obama claimed, "all of which makes the lengths to which critics have gone to scare people or undermine the law ... so hard to understand. I've got to admit, I don't get it. Why are folks working so hard for people not to have health insurance? Why are they so mad about the idea of folks having health insurance?"

Liberals should proclaim their disgust, as Marcus did, and point out that to oppose the ACA is not to oppose expanded health insurance. It would be good for the truth, good for our political culture, and good for the self-respect of the liberals who shake off the Obama-era harness and say it.