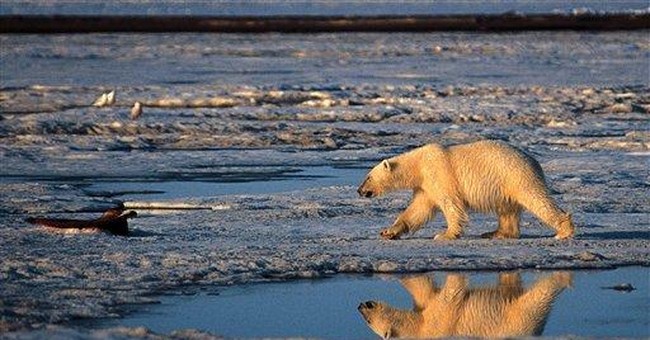 Trending
In a better world, debates about science -- and nearly everything else -- would be conducted without resort to demagoguery, sentimentality, cynical manipulation, or hysteria. In the world we inhabit, those tactics are dismayingly routine. Still, the great weakness of overwrought predictions of doom is that they can be checked.

The past year has not been kind to the most potent symbols of climate change hysteria. Consider the polar bears. Among the most moving images of the warmists' warnings was the solitary polar bear, supposedly marooned on an ice floe. The image became iconic after it was published in Science Magazine. Among the most memorable moments in Al Gore's film, "An Inconvenient Truth," was an animated clip depicting struggling polar bears.

You don't hear stories, as you do with dolphins, of polar bears rescuing drowning humans. But polar bears, especially cubs, have a different claim on our sympathy -- they're adorable. We shudder to see winsome, furry mammals drifting off to sea on ice floes -- all because we couldn't part with our SUVs. A children's book prepared by the United Nations put it just that way.

Well, according to WattsUpWithThat.com, the picture of that "stranded" polar bear has been lampooned as "ursus bogus." Experts on those creatures always found the warmists' interpretation of that photo odd, since polar bears can swim for hundreds of miles at a time. The longest recorded polar bear swim, according to National Geographic, was 426 miles straight (though National Geographic is all in on climate change). Since polar bears swim for a living, they're probably pretty good at gauging where land and ice floes are.

A new study from Canada, based on aerial surveys along the western shore of the Hudson Bay -- a region considered a bellwether for bear numbers in the Arctic generally -- found that the polar bear population was 66 percent higher than expected. Drikus Gissing, director of wildlife management for the Nunavut region, told the Globe and Mail, "the bear population is not in crisis as people believed. There is no doom and gloom." Oh, and the scientist for the Department of the Interior whose 2004 work on drowning polar bears inspired Al Gore and others has been placed on administrative leave for unspecified wrongdoing.

On the other side of the globe, a new survey using satellite technology has found that there are twice as many emperor penguins in Antarctica as previously thought. Science Daily reports, "Using a technique known as pan-sharpening to increase the resolution of the satellite imagery, the science teams were able to differentiate between birds, ice, shadow and penguin poo or guano. They then used ground counts and aerial photography to calibrate the analysis." The results: 595,000 birds dressed in black tie, almost double the previous estimates.

Less beguiling, but no less important for symbolic value, are the melting glaciers. The U.N. Intergovernmental Panel on Climate Change (co-winner of the Nobel Peace Prize with Gore) predicted in 2007 that "Glaciers in the Himalayas are receding faster than in any other part of the world and if the present rate continues, the likelihood of their disappearing by the year 2035 and perhaps sooner is very high if the Earth keeps warming at the current rate." The melting glaciers, we were told, would "devastate" the lives of more than a billion people living in Asia and eventually, swamp Manhattan and other coastal cities.

In 2010, the IPCC admitted that the melting Himalayas prediction was not based on science but on a 1999 media interview given by one scientist. They said they regretted the error.

Now, a study in nature, based on satellite imagery, has shown that some melting of lower altitude glaciers is taking place but that higher glaciers have been adding ice. The range called Karakorum, which includes the K2 peak, has been adding mass over the past decade, while other regions have lost mass. None of the glaciologists knows why.

Nature reports that the loss of ice from the Himalayas, once estimated at 50 gigatons per year, was actually measured at only 4 gigatons per year between 2003 and 2010. That's quite a difference.

That the climate is warming is not, if you ask most scientists, in question, though it hasn't warmed much -- if at all -- in the past decade. But the panic mongering of the global warmists has not just undermined their own cause -- it has diminished the prestige of science generally, and that is a serious loss.