Proud of My Country 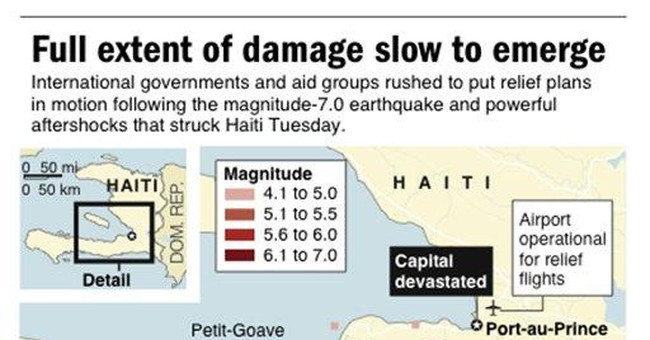 Observations on the cataclysm in Haiti:

As I write, the aircraft carrier USS Carl Vinson and half a dozen other U.S. Navy ships are steaming toward Haiti. They will join some 900 soldiers from the 82nd Airborne Division who are providing emergency aid. Twenty-two hundred Marines will also be on hand.

We don't maintain the world's largest military to provide humanitarian relief. But those who disdain our military power may want to say a private prayer of thanksgiving that we make the sacrifices to maintain it -- if only because in cases like this, there is no substitute for a military response. After the 2004 tsunami, when ports and roads were destroyed, the U.S. deployed 15,000 troops, a carrier task force, and a Marine expeditionary force. This flotilla supervised the delivery of tents, water, food, medicine, and other supplies to Indonesia and Thailand before any other aid could arrive. The chief of naval operations at the time, Admiral Mike Mullen, noted with justifiable pride: "We literally built a city at sea for no other purpose than to serve the needs of other people."

The following year, the U.S. military deployed similar aid to Pakistan after an earthquake, to Bangladesh following a cyclone, and to the Gulf coast after Katrina. While we shouldn't necessarily expect gratitude, we can, Michelle Obama notwithstanding, feel proud of our country.

Can someone muzzle Pat Robertson? Surely he forfeited all claim to be taken seriously when he agreed with Jerry Falwell that 9/11 was God's retribution for our sins. Having learned nothing from that plunge into inanity, he now informs his viewers that Haiti is "cursed" because its people "swore a pact with the Devil." It's a "true story," he insists. This man is a buffoon.

There are times when you just wish you could evacuate entire spots on the globe. Haiti, the poorest country in the Western Hemisphere, was devastated by major storms in 2004 and 2005, and by almost yearly floods since 2002. In 2008, the nation was pummeled by four major hurricanes in one month. Sixty percent of the country's harvest -- in a nation that consists largely of subsistence farmers -- was wiped out. The countryside, deforested by impoverished islanders who cut down trees for fuel, became a toxic sludge.

Haiti shares the identical climate and natural resources of its Hispaniola neighbor, the Dominican Republic. Like East and West Germany, and North and South Korea, its plight is a vivid illustration of the importance of decent government. The Dominican Republic is no Switzerland, but its per capita GDP was estimated by the CIA to be $8,200 in 2008, compared with $1,300 in Haiti.

Corruption and execrable government have turned Haiti into a sinkhole. We speak of "failed states" in the Middle East and Africa, but we have one just a few miles to our south. Those who could manage it have emigrated. According to the World Bank, 82 percent of Haitians with a college degree have fled, along with an estimated 88 percent of other skilled workers. The unskilled, too, have sought to escape, with thousands taking to open boats in shark-infested waters every year.

There is nothing wrong with the Haitian people. When they do reach better-organized nations, they thrive. Ria Treco of Florida International University examined the Haitian diaspora in the Bahamas and found that many Haitians take menial jobs but do not lack ambition. "Haitian children have accounted for some of the top students in the school system. Many Haitian parents walk their children to school to ensure that their children attend ... and oversee ... homework." According to the 2000 Census, 58 percent of Haitians living in the United States work in a professional capacity, and 33 percent of black doctors in New York State are Haitian.

Those who've managed to escape have not abandoned the ones they left behind. The 1.5 million-strong Haitian diaspora contributed $1.7 billion in remittances to the island in 2008, according to the U.S. Agency for International Development.

Nature unleashes its furies indiscriminately. But Haiti's tragedy is almost entirely manmade. Tyranny and corruption yield poverty, and poverty multiplies other woes. An earthquake of similar intensity struck Northridge, Calif., in 1994 and resulted in only 72 deaths. This catastrophe is a reminder of the tremendous importance of the rule of law, free markets, and an independent judiciary. Never take them for granted.