Mike Fuljenz
|
Posted: Apr 27, 2016 12:01 AM
Share   Tweet
The opinions expressed by columnists are their own and do not necessarily represent the views of Townhall.com. 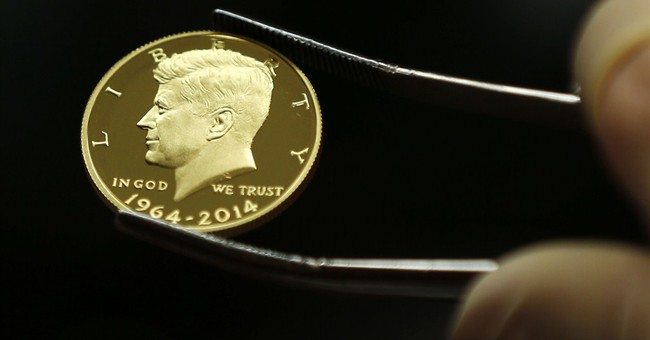 Ever since gold began rising in January, one big bank after another has changed its tune regarding gold. We don’t mean to criticize these bankers (too much), since it’s admirable to be willing to change your mind when the facts change, but the positive fundamentals for gold haven’t changed that much this year. These experts should have seen gold’s bullish move in advance – since we already had negative interest rates at the end of 2015. We already had rising global demand and no corresponding increase in supply.

The only major change in gold’s fundamentals in 2016 is that the Federal Reserve has backed down from its December plan to raise U.S. interest rates four times in 2016. At their last meeting, the Fed indicated maybe one change this year. The Federal Open Market Committee (FOMC) is meeting in Washington, DC this week, so we’ll know more about their intentions after the meeting ends on Wednesday, but if the Fed retrenches further – to zero rate increase this year, or even a possibility of a rate cut – gold could soar.

At the start of this year, when gold traded at $1060, the French banking giant BNP Paribas predicted that gold would quickly fall below $1,000 in early 2016 and then average $960 for the full year, perhaps even dipping below $900. Last week, they raised that projection by almost 50%, saying that gold could hit $1,400 by early 2017. BNP cited negative interest rates, even though those negative rates were well-established in Europe for most of last year. BNP wrote that gold has “recovered its safe-haven status” for “portfolio diversification…especially with the negative-interest-rate world we’re in right now.”

Denmark’s Saxo Bank is more cautious, saying, “For now, we maintain a $1250 end-of-year forecast for gold as we view silver as the better alternative considering its [until two weeks ago] relative cheapness.”

In other mainstream circles, Bloomberg reported on April 18 that Capital Economics commodity analyst Simona Gambarini sees gold rising to $1350 by the end of 2016, since “the gold price has been quite resilient, which means that investors have definitely changed their attitude towards gold.” Bloomberg also quoted Kyle Bass of Hayman Capital, who said “at some point in time I’d much rather own gold than paper. I just don’t know when that time is. … They can’t print any more of it. They can mine some more, but they can’t print it at the rate that central banks are printing. I just view gold as another currency.”

April 17-23 was National Coin Week. Another celebration last week was the start of the American Revolution, which began with Paul Revere’s ride late on the night of April 18 and the armed skirmishes that launched the Revolution the next day. It was all about gun control back then. According to accounts of that fateful day by author Dave Kopel.

“The American War of Independence began on April 19, 1775, when 700 Redcoats under the command of Major John Pitcairn left Boston to seize American arms at Lexington and Concord. The militia that assembled at the Lexington Green and the Concord Bridge consisted of able-bodied men aged 16 to 60. They supplied their own firearms, although a few poor men had to borrow a gun. Warned by Paul Revere and Samuel Dawes of the British advance, the young women of Lexington assembled cartridges late into the evening of April 18. At dawn, the British confronted about 200 militiamen at Lexington…”

“The Redcoats marched on to Concord, where one of Gage’s spies had told him that the largest Patriot reserve of gunpowder was stored. At Concord’s North Bridge, the town militia met with some of the British force, and after a battle of two or three minutes, drove off the British. Notwithstanding the setback at the bridge, the Redcoats had sufficient force to search the town for arms and ammunition. But the main powder stores at Concord had been hauled to safety before the Redcoats arrived.”

Celebrate American liberty this month with a purchase of some of the classic Liberty gold coins minted about 100 years later, the Type II Liberty Gold Double Eagles.

Type II Liberties are so rare, only one collector in 1,000 can hope to own even one of these gold coins. However, you could be one of the fortunate few. Here's what you need to know:

· The coin is called "Type II" because these were the second $20 Liberty coin designs to be minted.

· The Type II Liberty Double Eagles were also the first United States $20 gold coin designed to carry the motto 'In God We Trust'.

· Type II $20 Liberty Double Eagles were minted only between 1866 and 1876 when the coin was once again redesigned, making these the shortest series and thus the rarest, by mintage, of all $20 gold Liberties.

· As a result of the Gold Recall Act of 1933, it is estimated that over 95% of all Type II coins minted were melted down, a high destruction rate for a post-1850 series, making premium quality, almost uncirculated, and uncirculated Type II Liberty Double Eagles even harder to find.

Prices for many Type II Liberty Double Eagles began to rise steadily following the publication of my book, A Numismatic History & Analysis: Type II Double Eagles 1866-1876, which went on to win a Numismatic Literary Guild Investment Book of the Year Award in 2002.