Mike Fuljenz
|
Posted: Feb 25, 2016 12:01 AM
Share   Tweet
The opinions expressed by columnists are their own and do not necessarily represent the views of Townhall.com. 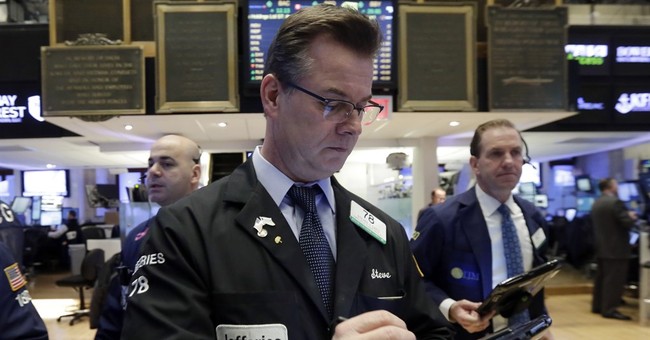 Gold is up over 15% so far in 2016, while stocks are down 6%, giving gold a 21.7% lead over the S&P 500 through the first 50 days of the year. Gold fell to $1208 on President’s Day, when most U.S. markets were closed, but it continued to recover through the rest of the week, closing at $1232 in London and $1227 in New York. Stocks also recovered for a few days (February 12-17) before retreating again. The trend toward negative interest rates in Japan and Europe helped support gold, while the Federal Reserve is reconsidering any further interest rates in their March meeting and even discussing negative interest rates.

Wall Street (and Europe) Continue to Change their Tune on Gold

Wall Street’s return to the gold market continues. As of last Wednesday, Bloomberg reported that the net inflows into gold-backed exchange-traded funds (ETFs) reached 154 metric tons, more than erasing all of last year’s net sales of 138 metric tons from gold ETFs. In addition, the central banks of China and Russia bought nearly 30 metric tons of gold in January alone (16 tons for China and 13.6 tons for Russia).

Some major banks dramatically changed their tune on gold. Last December (as we reported here), the big Dutch bank, ABN Amro, predicted $900 gold at the end of 2016. Last week, they totally changed their opinion and predicted $1,300 gold by year’s end. The ABN Amro analyst Georgette Boel wrote, “Having been long-standing bears, we have now turned bullish on precious metal prices,” She said that their reversal of opinion on gold was due to continued weakness in the world economy due to low oil prices, however those trends were clearly in place last December, when they made their $900 gold prediction.

Other banks are also predicting $1,300 or higher gold, now that gold has risen its first $200 from the bottom. France’s Credit Agricole bank predicts $1,250 by December and $1,320 by the end of 2017. If gold reaches $1,300 this year, their customers would have missed out on two-thirds of those gains.

Jim Cramer hosts a popular after-market show called “Mad Money” at 6:00 pm Eastern time each market day on the financial channel, CNBC – the same channel where Dallas Mavericks owner Mark Cuban spoke so eloquently about gold last February 11. Last week, Cramer praised gold strongly: “I’ve always been a big believer in the idea that you should always own at least a little gold.”

Like many other mainstream analysts, he cites the changes in central bank policy and negative interest rates for the renewed interest in gold. “The fundamentals have absolutely gotten more positive for gold in recent months,” he said, referring to Japan’s and Europe’s negative interest rates. “You actually lose money by letting your cash sit in a bank vault overnight.” He says the gold market “will need time to digest these gains,” meaning that “gold is going higher, but it might need to go a bit lower first…”

How high can gold go? Cramer says “gold could make its way back up to $1,500 even if it encounters some resistance” along the way. His bottom-line statement was: “Gold has finally woken up from its multiyear slumber, and the precious metal is poised to give you a powerful long-term move higher.”

Some More Reflections on the Current Gold Market

“Leave a million dollars with a bank, and in a year, you get only something like $990,000 back. I would rather want to own some solid currency, in other words – gold.”

--Marc Faber, the publisher of the Gloom, Boom & Doom Report. “

“When you have negative rates from banks and bonds, then gold with a zero-percent yield becomes a high-yield asset…. With nominal rates coming down, real rates are coming down and gold is going up.”

--Jim Rickards, author of “Currency Wars: The Making of the Next Global Crisis,”

“The safe-haven demand appears to be where people are focused on, and that is on a loss of faith in central banks being able to manage through this period.” Gold is “certainly getting more attention from people who have generally been bears over the past few years.”