Mike Adams
|
Posted: Jul 26, 2016 12:01 AM
Share   Tweet
The opinions expressed by columnists are their own and do not necessarily represent the views of Townhall.com. 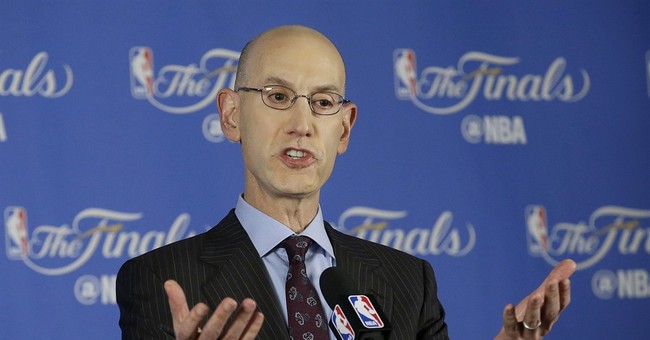 Rep. Robert Pittenger of North Carolina has written one of the best letters (below) I’ve ever seen come from the pen of an American politician. It was written to National Basketball Association Commissioner Adam Silver and thus stands little chance of getting a response. Since the letter was so good and will probably get no reply, I thought I would offer the kind of rebuttal Commissioner Silver would offer if he really had personal integrity and a character for truth telling. He has neither. So here goes:

Last week, I met with constituents from China who outlined the Chinese government practice of forcefully harvesting vital organs as part of their oppression of religious minorities. Meanwhile, the NBA will start selling tickets for preseason games in China next week.

Is the NBA implying that China’s abhorrent violation of basic human rights is acceptable, but North Carolina saying men shouldn’t use the girl’s locker room is a bridge too far? What is the NBA’s true priority? The unmistakable hypocrisy is clear to me.

Please justify how you can be engaged with a country who [sic] has flagrantly violated human rights with forced abortions and selling vital human organs. There seems to be a gross lack of judgment and moral clarity.

I can tell from the tone of your letter’s opening that you disapprove of our decision to do business with China. It is clear that you underestimate the extent and nature of our commitment to progressive politics. Some have claimed that the NBA has become captive to liberal political interests. That simply is not the truth. We are not a liberal organization. We are a leftist organization. That is an important distinction. It translates into a wholesale support of communism on our part. And that includes communist regimes with histories of so-called “human rights abuses.” We do not share your belief in the inherent dignity of individual human beings. Therefore, we have no problem with compulsory organ harvesting so long as the practice benefits the collective. Put simply, individuals have no rights. The collective has rights and it is the obligation of the state to enforce them for the common good. This is precisely why we have no interest in respecting religious freedom. Such “freedom” serves as nothing more than an opiate for the masses. It is the kind of freedom that induces slavery to the capitalist order.

Obviously, we are not implying that any “abhorrent violation of basic human rights” is acceptable because we do not believe in such a thing as basic human rights. It is worth repeating that people possess rights only in relation to the collective. Furthermore, no “creator” endows these rights. They are given instead by the state. If the state gives these rights then the state may take them away. Our priority is siding with the LGBT activists because we see them as revolutionaries. We believe the sexual revolution can help bring about a Marxist revolution in America. Put simply, cultural Marxism leads eventually to economic Marxism. That is the plan and that is why we are following those who are making the long march through our social institutions. There is no hypocrisy here. This is what we believe. And we are acting in accordance with our beliefs.

Your objections to abortion and organ harvesting fall on deaf ears. Clearly, both population control and the selling of organs benefit the collective, which is the sole concern of the state. Furthermore, your accusation that we lack “moral clarity” presupposes that an absolute standard of right and wrong exists. We reject this notion altogether. There is no truth. There is only power, which, in turn, defines “truth.” We respect your right to express your objections for the time being. But your time is drawing to a close. The Cultural Revolution is well underway. The economic one will soon follow. You are simply on the wrong side of history.

Undoubtedly, many reading my mocking response will dismiss it as pure parody. But reality in 21st century America is getting hard to parody. I invite critics to offer a different ideological interpretation in order to reconcile the NBA’s respective treatment of North Carolina and Communist China.

Good luck trying. Just try not to come across as holier than Mao.