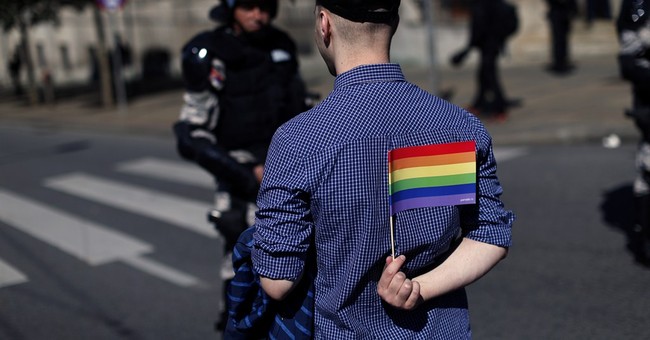 Have you ever noticed that you never see signs that say "Tolerate Diversity?" The reason for that is simple. No one wants to be tolerated. Tolerance presupposes a moral judgment. In other words, I must first judge you negatively before I decide to put the judgment aside and tolerate you. And no one has any tolerance for even a momentary act of judgment these days. Just ask the owners of Sweet Cakes, an Oregon bakery that refused to bake a cake for a lesbian couple’s pretend wedding. They were recently fined $135,000 for being willing to tolerate but not actively affirm the ceremony.

A careful reader can see that the couple is simply lying. In other words, they really aren’t poor lesbians. They’re just really bad thespians. Obviously, no one can experience loss of appetite, worry, and resumption of smoking followed by “weight gain.” Those are all things that make you lose weight. Duh! So why did the judge award them $135,000 instead of accusing them of perjury?

The answer is simple. None of the facts of the case are relevant. The judge already believed that this couple has an absolute constitutional right to be affirmed, not just tolerated. And that has been the goal of the LGBT movement all along. That is why all the rainbow stickers you see demand that we "Celebrate Diversity," not just “Tolerate Diversity.”

So where is all of this going? Well, it’s going exactly where I have said it was going for over a decade. Demanding that businesses celebrate so-called gay weddings is not the end game. Next, celebration of homosexuality will become a condition of public employment. Do you think I am exaggerating? Enter East Carolina University (ECU).

Two years ago at ECU, the administration sent gay affirming tee shirts to departments all across campus. Next, they sent a photographer to take pictures of those who decided to wear them. Finally, they posted group pictures of those who wore the shirts in an effort to single out those who did not. But it got worse last semester.

After ECU decided to have a separate graduation ceremony for homosexuals, senior David Main wrote to the administration voicing an objection. Rather than tolerating David’s opinion, the administration circulated his email to the entire senior class along with a copy of their diversity policy. The result of “outing” David Main was predictable.

After fellow ECU students viciously attacked him with profanity - all for his refusal to celebrate segregated graduation – David Main demanded to know who sent his email to thousands of his fellow students. The ECU administration then took a strong, principled, and unwavering stand for privacy. Yep, you guessed it. They did not take a stand for David Main’s email privacy. They took a stand by protecting the privacy of the administrator who launched the gay jihad against David.

To date, ECU simply refuses to divulge the name of the government employee who intentionally encouraged students to bully David Main. The reason for that is simple. They support bullying of the right people. Right means “conservative.”

Ideally, the LGBT movement would like to extend this government mandated celebration to pastors by stripping their churches of tax-exempt status if they refuse to perform so-called same-sex weddings. Such a move would be patently unconstitutional, as it would result in government subsidies for liberal churches and not conservative ones.

But what is to stop these leftist activist judges from doing it? They have already twisted and contorted the Establishment Clause beyond recognition.

This is the hard lesson we are about to learn: That no one can demand a “right to be celebrated” without infringing on the rights of other people. Injecting such a right into a constitution that lives and breathes will ultimately cause our republic to suffocate and die.