How the Left Is Killing Free Speech 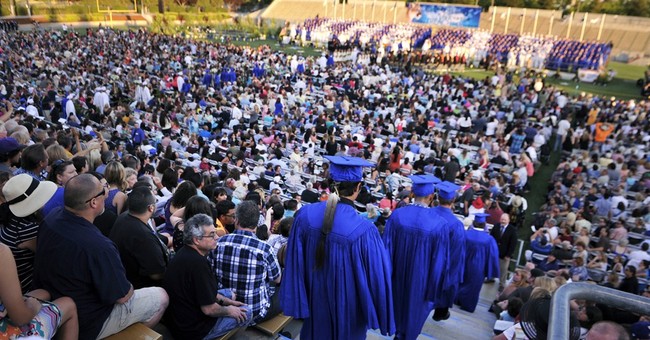 Universities need to stop giving students caps and gowns when they graduate. Instead, I recommend they give them helmets and wrap them in bubble wrap. The reason is that in college they become so weak and bruise so easily that there is little chance they can function in a free society without hurting themselves. In fact, many college students are too emotionally immature to encounter classic literature without becoming emotionally unraveled.

Take Rutgers student Philip Wythe. Last year, he suggested that The Great Gatsby was so potentially traumatizing it should be accompanied by the following warning: “Suicide, Domestic Abuse, and Graphic Violence.” As Kirsten Powers aptly noted, “If (college students are) going to be traumatized by The Great Gatsby then they are going to find day-to-day life unbearable once they step outside the child-care programs that are passing for universities today.”

Students like Wythe don’t just wake up one day with the intellectual fortitude of a five-year old. It takes a lot of coddling to make these young adults as weak as preschoolers. One of the means by which this is achieved is the so-called campus free speech zone. These zones assume a default position that campus speech is disallowed until officially authorized.

An extreme example of this mentality was once found at the University of Cincinnati (UC). Their free speech restrictions limited discourse to a zone that was merely 0.1% of the physical area of the campus. In other words, students could traverse 99.9% of the campus without having to encounter potentially offensive speech. All speech was presumed to be unlicensed and prohibited in these areas. Fortunately, Young Americans for Liberty (YAL) successfully sued the school and overturned the broad ban on speech at UC.

But the damage has been done to the broader campus culture. Speech zones, which limit the amount of discourse, are combined with speech codes, which strike at the content of discourse. Arguably, the latter are more dangerous because they advance the notion that one has a right to be unoffended. This is the mentality that actually encourages young people to proactively suppress speech they find offensive.

And we are beginning to see the effects. Michael Bloomberg, himself no political conservative, noted this trend in a commencement speech at Harvard University. Speaking specifically about the trend towards silencing commencement speakers, he said, “In each case, liberals silenced a voice of individuals they deemed politically objectionable.”

Bloomberg almost got that one right. The people doing the silencing were not liberals. They were illiberal leftists. As Kirsten Powers points out in The Silencing, there is a big difference between the two. Liberalism presupposes tolerance of opposing views. In contrast, the illiberal leftist seeks to destroy dialogue. As Powers puts it, these illiberal leftists seek monologue on their side, and silence on the other side.

If you think Powers is exaggerating ask former Israeli Prime Minister Ehud Olmert. His planned 20-minute talk at the University of Chicago took over an hour as screaming protestors constantly interrupted him.

Or ask Israeli ambassador to the United States Michael Oren. He suffered ten interruptions and was forced to take a 20-minute break when he tried to give a speech at the University of California-Irvine.

Or ask Tom Tancredo who tried to give a speech at Michigan State University’s law school until angry protesters set off fire alarms. It was almost as bad as the time Tancredo tried to speak at the University of North Carolina – Chapel Hill while angry protesters actually broke windows during the middle of his speech.

The illiberal mob doesn’t always reserve its fanatical intolerance for campus visitors. They are equally likely to exhibit it towards members of their own university community. One of their most favored techniques is joining organizations they hate and then trying to subvert the core beliefs of the organization in an effort to get thrown out of the organization.

Why would they do such a thing? It’s simple. After they get thrown out of the organization, they try to have it shut down for being “discriminatory” or “non-inclusive.”

It is worth noting that this tactic is not new. The KKK used to employ it in the 1950s. Klansmen would actually try to join the NAACP in order to change the group’s core beliefs. They even went all the way to the Supreme Court in an effort to strip the NAACP of its tax-exempt status – all for refusing to reveal their membership lists so they could target and harass NAACP members en route to destroying the organization.

It is sad that contemporary campus “liberals” are actually using KKK tactics in their efforts to destroy campus organizations. Their targets are not black organizations. Their targets are usually Christian organizations that refuse to relinquish their deeply held religious views concerning sexual morality. Of course, these guerilla tactics are almost always implemented with the backing of university administrators who pass and then selectively enforce “non-discrimination” policies.

I am old enough to remember when the goal of a college education was to expand one’s horizons. Now the goal is to learn to be more emotionally volatile than the person whose ideas you seek to negate. As one of my readers recently put it, college is no longer providing a comprehensive education. It’s just a prep course for fascism.

Eventually, this mentality spreads to the larger culture. So employers beware. After graduation, these petulant children are headed for your workplace.

Source: This column and the previous one were (somewhat informal) reviews of the first half of The Silencing by Kirsten Powers. Go get a copy and read it … before it is banned from a campus near you!