Michelle Malkin
|
Posted: Feb 17, 2016 12:01 AM
Share   Tweet
The opinions expressed by columnists are their own and do not necessarily represent the views of Townhall.com. 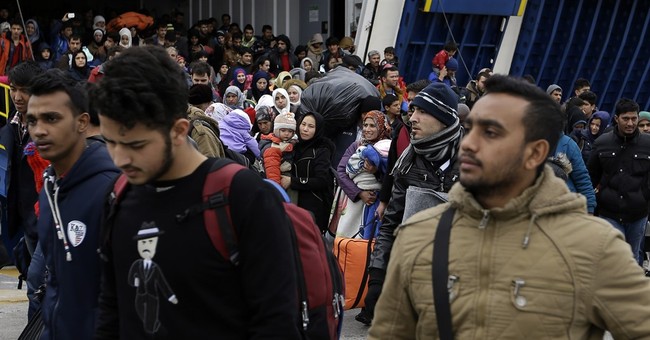 Trending
Colorado dodged a bullet. After a stinging backlash from local leaders and Rocky Mountain politicians in both parties, the Obama White House retreated this weekend from plans to dump in our state 1,000 minors who immigrated here illegally.

Good riddance to the feckless feds, and don't come back, y'all.

Now, let this be a lesson for other communities facing the D.C.-engineered human flood. You can and should say no -- and force Washington to put first things first.

The U.S. Department of Health and Human Services had unveiled a hastily drawn scheme just two months ago to convert a Denver Federal Center warehouse in preparation for another springtime surge of Central American migrants coming through Mexico. Look past the sob stories. The recent surges were cunningly engineered by drug cartels and human traffickers.

As Brandon Judd of the National Border Patrol Council testified on Capitol Hill recently: "The cartels understood that the unaccompanied minors would force the Border Patrol to deploy Agents to these crossing areas in order to take the minors into custody. I want to stress this point because it has been completely overlooked by the press," he told the House Judiciary Committee. The unaccompanied minors could have walked right up to the port of entry and requested asylum if they were truly escaping political persecution or violence. "Why did the cartels drive them to the middle of the desert and then have them cross over the Rio Grande only to surrender to the first Border Patrol Agent they came across?" Judd challenged.

"The reason is that it completely tied up our manpower and allowed the cartels to smuggle whatever they wanted across our border."

This is just another maddening example of Obama's warped priorities at work. Instead of building effective walls and enforcing our borders to prevent the coming illegal immigration waves manufactured by criminal racketeers, this administration rushes to build welcome center magnets that shelter the next generation of Democrat voters.

With an estimated 125,000 Central American unaccompanied minors apprehended by the besieged Border Patrol at the southern border since 2012, HHS now oversees more than 100 child migrant centers in a dozen states.

But not in Colorado -- for now.

Obama's fantastical construction proposal in the Denver suburb of Lakewood came on the heels of the feds' black-hole fiasco at the nearby Aurora Veteran Administration hospital. That project broke ground in 2010, is $1 billion over budget and over five times its original estimate, is at least two years behind schedule, and has been riddled with contract corruption and fraud.

Pressed for details by wary Coloradans in the wake of that scandal, HHS bureaucrats admitted the planned migrant center renovations would cost up to $40 million and take at least a year to complete. At least.

The White House is preparing to ship border surgers to temporary facilities in Texas, Florida and Holloman Air Force Base in New Mexico. Mum's the word on other potential illegal immigrant extended stay suites. But every community with a military base should be on high alert.

In 2014, San Antonio's Lackland Air Force Base, Port Hueneme Naval Base in Ventura County, California, and Lawton, Oklahoma's Fort Sill Army post were all used as border surge dumping grounds. As I reported after a whistleblower alerted me that spring, the Obama administration also surreptitiously sent two plane loads of nearly 200 border-crossers to Hanscom Air Force Base in Bedford, Massachusetts and Boston's Logan Airport. DHS crapweasels initially denied my reports, but admitted the secret redistribution program a month later.

The issue isn't whether local American communities have "compassion" for border trespassers. The issue is whether the federal government is doing its fundamental job "providing for the common defense" and putting the "general welfare" of "ourselves and our posterity."

Until then, if President Obama insists on allowing thousands of exploited Central American minors to enter the country illegally, I propose they be housed at the presidential retreat of Camp David -- and that amnesty advocate Mark Zuckerberg and all the Gang of Eight lobbyists and corporate sponsors on the left and right foot the bill. The commander in chief's vacation spot in the Catoctin Mountain Park is secure. It contains 200 acres of land on which to build temporary Obamaville shelters for all the surgers. And any overflow should be handled by pitching tents on the White House lawn.

The most powerful way to make D.C. listen is to make D.C. suffer the consequences of its own detrimental actions. Not in our backyards, Mr. President, until you use yours first.