Fanning the Flames of Another Black Church Arson Hoax 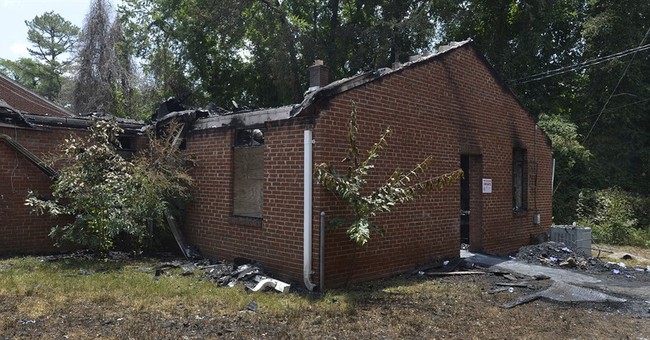 The last thing the community and our country need are hysterical journalists compounding the pain with inflammatory reporting on an unsubstantiated "epidemic" of black church arsons.

On Monday, a Baltimore Sun lead editorial decried "a series of mysterious fires at African-American churches across the South" in the wake of the Charleston murders. The newspaper cited a "pattern" of attacks, including what it claimed was an "uptick in attacks on 37 black churches in the South" in the 1990s that "prompted President Bill Clinton to set up a church-arson investigative task force."

The Sun neglected to mention that Clinton had falsely claimed at the time that he had "vivid and painful memories of black churches being burned in my own state when I was a child"-- an assertion immediately debunked by the Arkansas Democrat-Gazette.

The Sun also neglected to mention that the manufactured media coverage that launched the 1990s black church arson juggernaut, fueled by former USA Today reporter Gary Fields' 61 fear-mongering stories, fell apart under scrutiny. Fields' own employer was forced to admit that "analysis of the 64 fires since 1995 shows only four can be conclusively shown to be racially motivated."

Reminder: Several of the hyped hate crimes against black churches had been committed by black suspects; a significant number of the black churches were, in fact, white churches; and the complex motives behind the crimes included mental illness, vandalism and concealment of theft.

Once again, falsified history is repeating itself.

The NAACP, which capitalized on the Clinton-era race hustle, is now pushing the new arson epidemic narrative. The organization remains shamelessly undaunted after fueling the fake NAACP "bombing" in Colorado Springs earlier this year. The group's CEO, Cornell Brooks, tweeted the incendiary "#WhoIsBurningBlackChurches" hashtag on Tuesday and disclosed that he is "informing churches, reviewing legislation, pushing media awareness and deciding legal options."

The left-wing instigators at the Southern Poverty Law Center, whose stated mission is to "destroy" its political opponents and whose target map and list of social conservative groups were used by left-wing domestic terrorist Floyd Lee Corkins to shoot up the Washington, D.C., office of the Family Research Council in 2012, baselessly reported: "In what may not be a coincidence, a string of nighttime fires have damaged or destroyed at least six predominately black churches in four southern states in the past week."

Teach for America alumnus agitator DeRay McKesson quickly added his Twitter kerosene to the fire, reflexively claiming that the "KKK" was responsible for a half-dozen black church burnings.

Buried beneath the sensationalized social media avalanche of panic: the more judicious and careful observations of Los Angeles Times reporter Matt Pearce that the feds have made no official determinations that any hate crimes have taken place and that "it's unclear whether any of the fires are linked."

It was observed that "one of the half-dozen church crimes was most likely "accidental" and had "no element of criminal intent."

Another "was likely touched off by an electrical short" after a tree limb fell on the property, yanking the electrical service line with it.

And yet another alleged "black church arson" actually involved a white church "struck by lightning."

Mic.com quoted a hate crimes "expert" blaming -- you guessed it -- "the growth of violent right-wing extremist ideology in the U.S." for the nonexistent black church arson epidemic.

Where there's smoke, there's fire. In this case, it's coming from the five-alarm self-immolation of agenda-driven journalism's credibility.