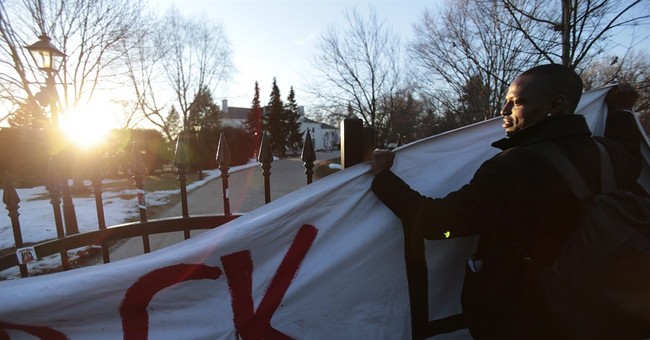 Trending
It's increasingly difficult to tell the difference between Teach for America -- whose leaders are at the forefront of inflammatory anti-police protests in Baltimore, Ferguson, and now McKinney, Texas -- and left-wing activist groups such as Organizing for Action (President Obama's partisan community organizing army).

Guess what, taxpayers? You're paying for it!

Wendy Kopp founded Teach for America in 1989 after writing her Princeton University thesis on the need for a "national teaching corps" of elite college grads who would serve students on short-term stints in low-income neighborhoods. The do-gooder group has exploded into a massive, nonprofit business.

"Between 2000 and 2013, " researchers at the National Educational Policy Center reported, "TFA's yearly operating expenditures increased 1,930 percent -- from $10 million to $193.5 million. Of those expenditures, TFA annual reports show that about a third of operating costs are borne by the public." Individual TFA chapters have raked in millions in federal AmeriCorps grants, supported by leaders in both political parties. Large corporations (including $100 million donor Wal-Mart), philanthropic foundations, and individuals have pitched in nearly a half-billion dollars in tax-deductible charitable private donations.

Teach for America spends copious amounts on advertising, lobbying and public relations to hype its academic benefits, but its record on producing benefits for students is mixed. Government teachers' unions don't like the organization's fast-track "boot camp" training or its support of public charter schools. But those concerns pale in comparison to the divisive, grievance-mongering activities of the group's increasingly radicalized officials and alumni.

TFA's most infamous public faces don't even pretend to be interested in students' academic achievement. It's all about race, tweets and marching on the streets.

Deray McKesson, described by TFA as a "protestor," is a finalist for the organization's $10,000 Peter Jennings Award for Civic Leadership, which will be announced next month. He briefly taught sixth-grade math for the program before graduating to full-time racial rabble-rousing.

A gushing New York Times reporter credited McKesson and his social justice warrior partners with building "the most formidable American protest movement of the 21st century to date." He uses Twitter to jump the gun on every police-related shooting across the country. He fanned the flames over the bogus "NAACP bombing" in Colorado Springs. This week, McKesson scurried to McKinney, Texas, along with the Nation of Islam, New Black Panther Party, and assorted rent-a-mob professionals, to turn a pool party fight into an international incident.

"We are currently at the McKinney Police Department, occupying space," he breathlessly reported. One of his fellow peace-loving instigators at the rally thundered: "[W]e're setting the stage for a terrorist attack in this country, and the group is not going to be ISIS."

Another fellow TFA traveler is Brittany Packnett, the executive director of St. Louis's Teach for America chapter. She's also a finalist for the group's Peter Jennings Award and a McKesson ally. They published a Ferguson newsletter together, distributing it to activists around the country -- and inside the Justice Department. Her Twitter profile shows her making the debunked "Hands up, don't shoot" gesture in front of a line of police officers. Credited with putting the "#BlackLivesMatter" Twitter hashtag on the map, the 29-year-old St. Louis-area activist was tapped by President Obama to join his federal policing commission.

Packnett briefly taught third grade as a TFA instructor in Washington, D.C., before diving into political organizing to represent "our collective truth" and promote "the urgency of now."

Packnett pointedly praises "the fact that TFA has consistently had my back" in her quest for "disruptive change and systemic change." She bragged that TFA co-CEO Matt Kramer accompanied her to protests in St. Louis. Another proud moment for TFA's St. Louis leader: Her conversion of a 25-year-friend who went from having actual jobs as a pharmacy technician and furniture store employee to becoming a "field organizer for the Organization for Black Struggle."

Teach for America has transformed itself into a recruiting center for militants bent on occupying themselves with anything other than imparting knowledge and academic excellence to children in the classroom. When a government-funded outfit abandons education as its mission in favor of social agitation, it's time to cut off the taxpayer pipeline.