Asian-Bashing Dems and Doormat Minorities Who Enable Them 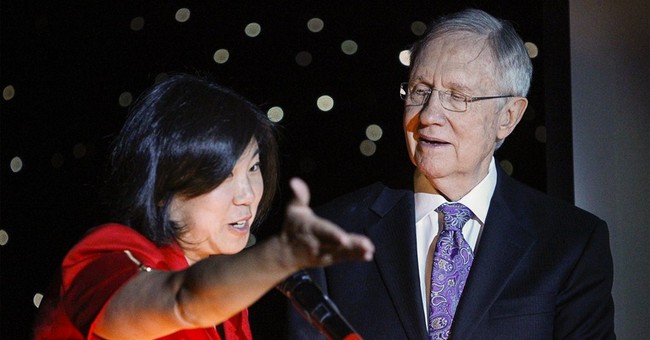 Trending
Harry Reid is a bigoted Beltway corruptocrat with an interminable case of diarrhea of the mouth. The feeble-minded coot stuck his foot in that mess of a mouth again last week at the Las Vegas Asian Chamber of Commerce. But as mortifying as the Senate Majority Leader is, there's an even worse spectacle: Asian-American liberals who keep giving top Democrats and their partisan operatives blanket passes.

Reid clumsily offered his assessment of the success and intelligence of business leaders of Asian descent at the gathering. "I don't think you're smarter than anybody else, but you've convinced a lot of us you are," he babbled. You put those uppity Asians in their places, Hater Harry!

During a question-and-answer session, Reid followed up his jibe with a crude "joke" about Chinese surnames that would make Archie Bunker cringe: "One problem that I've had today is keeping my Wongs straight."

Good thing the pale-faced codger didn't let a "ching-chong" slip out, too. You  know  it was ringing around between his ears. Mocking Asian monikers is a hanging offense if you're a Republican pol or conservative talk-show host. But it's just a meaningless gaffe by "diversity's" best friend when you're Democratic Senate Majority Leader.

That's why Reid's hosts obliged with subdued tittering. National news anchors selectively averted their gazes. The Asian American Journalists Association, so quick to issue sanctimonious guidelines for avoiding ethnic stereotypes, maintained radio silence. And the usual left-wing speech police who read racism into every word uttered by conservatives from "angry" to "Chicago" to "Constitution" to "Obamacare" saw and said nothing.

One bizarre group, Asian Pacific American Advocates, was only offended because they resent public attention paid to successful Asian Americans. They vented that Reid "falsely assumes that our communities continue to perpetuate the model minority stereotype, when we have been actively working to highlight the vast socioeconomic disparities within our communities." These confused people have spent way too much time in social justice 101 classes.

Back in Washington, D.C., the usually garrulous Democratic chairwoman of the Congressional Asian Pacific American Caucus (CAPAC), Rep. Judy Chu, responded by ... not responding at all. CAPAC Executive Director Krystal Ka'ai did not return my email seeking reaction to the race-mocking Senate Majority Leader, who has now apologized for his "extremely poor taste."

Chu and her ethnic grievance caucus -- which pledges to "denounce racial and religious discrimination affecting Asian Americans and Pacific Islanders" -- did find time over the past year to:

--attack a Seattle theater production of The Mikado for its use of "exaggerated Asian stereotypes."

Earlier this month, Kathy Groob, a "progressive" supporter of McConnell's Democratic opponent, Alison Grimes, repeatedly insulted Chao on social media as his "Chinese wife." She's "not from KY, she is Asian," fumed Groob. You won't be surprised to learn that Groob had complained copiously about "sexism" and "racism" by the tea party.

When will doormat minorities grow spines and stop protecting the progressives of pallor who denigrate them? Collectivism is a hard, cowardly habit to break.