Meet the Cops Who Gave Their Lives 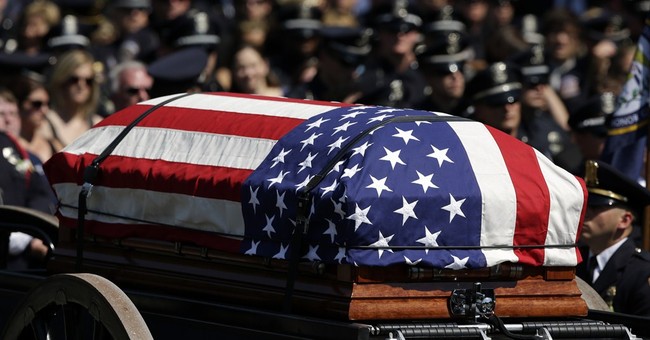 If you've been watching cable news, reading Hollywood celebrities' tweets and listening to race-hustling opportunists, you might think that every police officer in America has a finger on the trigger, hunting for any excuse to gun down defenseless youths.

This hysterical nonsense must be stopped.

The Cirque du Cop-Bashing, with Al Sharpton as ringmaster, is working overtime to exploit the deadly incident in Ferguson, Mo. That means stoking anti-law enforcement fires at all costs.

Are there bad cops? Yes. Does the police state go overboard sometimes? Yes. Do the demagogues decrying systemic racism and braying about "assassinations" know what happened when teenager Mike Brown was tragically shot and killed last week? No.

Here's a reality check. While narcissistic liberal journalists and college kids are all posting "Hands Up" selfies in hipster solidarity with Ferguson protesters, it's law enforcement officers who risk their lives in "war zones" every day across the country.

Fact: Last year, 100 law enforcement officers were killed. On average, over the past decade, there have been 58,261 assaults against law enforcement each year, resulting in 15,658 injuries.

Just this week, NLEOMF released preliminary fatality statistics from August 2013 to August 2014. Total fatalities are up 14 percent, from 63 last year to 72 this year. "Five officers were killed in ambushes, which continue to be a major threat to law enforcement safety," the group notes.

Among the men in uniform who gave their lives this summer:

--Police Officer Scott Patrick of the Mendota Heights Police Department in Minnesota. He was shot and killed while conducting a traffic stop on July 30. Patrick leaves behind a wife and two teenage daughters.

--Police Officer Jeffrey Westerfield of the Gary Police Department in Indiana. Westerfield was shot in the head and killed in a July 6 ambush while sitting in his police vehicle after responding to a 911 call. The suspect had been previously arrested for domestic violence and for kicking another officer. Westerfield, a 19-year police department veteran as well as an Army veteran, leaves behind a wife and four daughters.

--Officer Perry Renn of the Indianapolis Police Department. He was shot and killed while responding to reports of gunfire on July 5. After 20 years on the job, Renn chose to serve in one of the city's most dangerous areas, even though his seniority would have allowed him to take a less dangerous role. "He chose to work in patrol to make a difference in the field," Police Chief Rick Hite said at Renn's funeral. "Every day, Perry got out of his police car." Renn is survived by his wife.

--Deputy Sheriff Allen Bares, Jr. of the Vermilion Parish Sheriff's Office in Louisiana. The 15-year law enforcement veteran was shot and killed on June 23 while investigating two suspicious suspects. Bares had been mowing his lawn while off-duty when he witnessed a suspicious car crash. When he went to investigate, he was gunned down. The assailants stole his truck as he lay dying. "He's the type of person that would give his shirt off his back to anybody," a cousin said in tribute. "Anyone that knows Allen will tell you that he was that kind of person." Bares leaves behind a wife and two children.

--Police Officer Melvin Santiago of the Jersey City Police Department in New Jersey. Santiago, a proud rookie cop who loved his job, was ambushed on July 13 by a homicidal armed robber. Santiago was 23 years old. After Santiago's killer was shot dead by police, the violent Bloods street gang vowed to "kill a Jersey City cop and not stop until the National Guard is called out."

Al Sharpton, concocter of hate-crimes hoaxes and inciter of violent riots against police, had no comment.