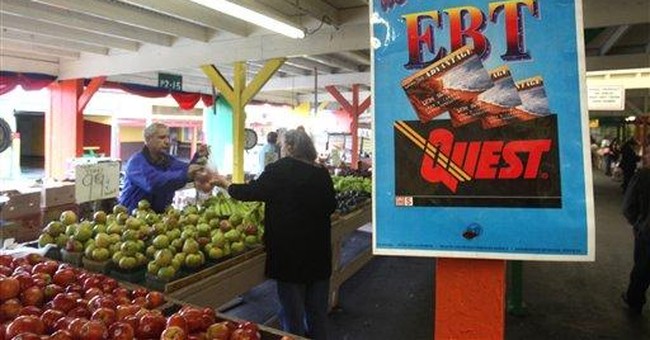 Trending
From New York to New Mexico and across the dependent plains, welfare recipients are getting sauced on the public dime. Drunk, besotted, bombed. But while politicians pay lip service to cutting government waste, fraud and abuse, they're doing very little in practice to stop the EBT party excesses. Where's the compassion for taxpayers?

You see the signs everywhere: "We accept EBT." Fast-food restaurants do. Clothing retailers do. Auto repair shops, liquor stores and even sushi joints are joining the club. "EBT" stands for the federal government's electronic benefits transfer card, which is intended to provide poor people with food stamps and cash assistance for basic necessities. The two separate programs were combined into one ATM-like card designed to reduce the "stigma" attached to Nanny State dependency, and -- voila! -- an entirely new method of mooching was born.

In New Mexico, Jim Scarantino of Watchdog.org reported that in just a three-month period, EBT cards were used at multiple liquor stores, girly bars, smoke shops and casinos both inside and outside the state. Californians are notorious EBT fraud artists; some $70 million in EBT funds were withdrawn from outside the state's borders over the past several years, including nearly $12 million taken out in Las Vegas. Watchdog.org kept tabs on government workers in Connecticut, Indiana, Iowa and Wisconsin nabbed in EBT fraud rings and schemes.

Here's a radical idea: How about making taxpayer protection a priority for once and, yes, getting serious about strengthening the stigma on bottomless entitlement dependency and entitlement abuse?

According to the Department of Agriculture, illegal food stamp use costs the public upward of $750 million a year. A report by the Government Accountability Institute last fall revealed that "few security measures are in place to monitor EBT card fraud. ... Nationwide, the USDA has approximately 100 investigators policing over 200,000 authorized EBT retailers." In Florida, the report noted, 63 investigators carry the burden of policing more than three million EBT users.

Excuse-makers for the welfare-takers emphasize that both eligibility fraud and EBT card trafficking fraud are minuscule. But a bottle here, a case there, a pole dance here, a lap dance there, and soon it all starts to add up. With food stamp rolls exploding under both Republican and Democratic administrations while enforcement resources shrink nationwide, EBT has taken on a whole new meaning: Exploitation of Broke Taxpayers. Shame.