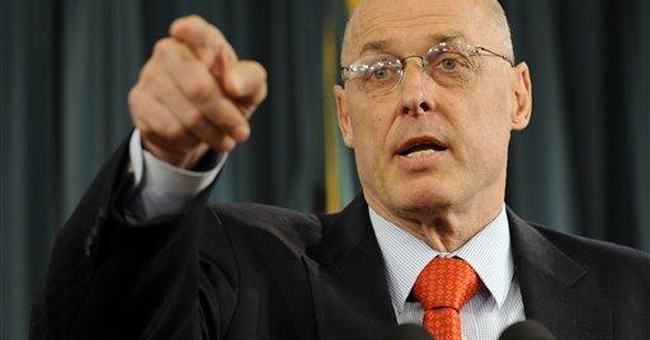 Paulson held a bazooka to taxpayers' heads. He groveled on his knees in front of Democratic House Speaker Nancy Pelosi. He lured leaders from both political parties into linking arms in a panicked Chicken Little line dance for the beleaguered mortgage industry. Paulson demanded an unprecedented $700 billion Troubled Asset Relief Program for the good of the country. For the health of the housing market. For the survival of the economy. No time for deliberation. No time to review the failures of such interventionist approaches around the world. Now, now, now!

And now? The pulled-out-of-the-posterior "$700 billion" price tag has ballooned into the trillions. The "mortgage industry rescue" has expanded to banks, insurance companies, automakers, credit card companies and possibly the entire national volume of consumer lending. Oh, and that vaunted "TARP" component, Paulson admitted this week, is nothing but a four-letter word that rhymes with TRAP.

In September, Paulson offered his lofty pledge: "The ultimate taxpayer protection will be the stability this troubled asset relief program provides to our financial system, even as it will involve a significant investment of taxpayer dollars. I am convinced that this bold approach will cost American families far less than the alternative -- a continuing series of financial institution failures and frozen credit markets unable to fund economic expansion."

Two months later, Paulson's conviction melted faster than microwaved butter. "Our assessment at this time is that this is not the most effective way to use TARP funds," he sheepishly told the nation Wednesday.

Hey, who died and put Emily "Never Mind" Litella in charge of the economy?

Paulson explained at his non-mea culpa press conference that he knew when the bailout was signed that it wasn't going to work as sold: "It was clear to me by the time the bill was signed on October 3 that we needed to act quickly and forcefully, and that purchasing troubled assets -- our initial focus -- would take time to implement and would not be sufficient given the severity of the problem."

Now he tells us? Would have been nice if he had made this clear -- quickly, forcefully and publicly -- to the Beltway stooges who were pulling the TARP over our eyes. So much for Paulson's earnest transparency commitments on the Hill.

Members of Congress who let themselves be bullied into switching their votes on the bailout should be experiencing the biggest case of buyers' remorse in U.S. history. They fell for what Nobel Prize-winning economist F.A. Hayek called "the fatal conceit" -- the disastrous idea that a federal bureaucrat has the knowledge to do a better job than the private market in organizing and directing an economy. They gave unchecked power to a single government official without a clue.

Wielding his enormous authority, Paulson is desperately throwing our money at banks in a futile attempt to convince them to lend. Instead, those banks are either hoarding the cash or acquiring more assets. In other words: Paulson is helping the banks that were "too big to fail" grow even bigger with taxpayer backing. Swell.

The White House says: "We'll just trust our treasury secretary to implement the program." President Bush insists "government's role will be limited and temporary." Meanwhile, Democratic Rep. Barney Frank is shrugging off the lack of bailout disclosure by both the Federal Reserve and Treasury. But as I reminded readers before this latest bait-and-switch admission, Hank Paulson is not to be trusted. I repeat:

This is the man who proclaimed the subprime crisis "largely contained" in April 2007; "near the bottom" in May 2007; and "largely contained" again in August 2007. This is the man who pledged that he had "no interest in bailing out lenders or property speculators" in October 2007 and couldn't "think of any situation where the backdrop of the global economy was as healthy as it is today."

This is the man who patted himself on the back for refusing to "put taxpayer money on the line" to rescue Lehman Brothers on Sept. 15 -- and then turned around the next day and engineered the $85 billion taxpayer-funded bailout of AIG. This is the man who vowed he had "no plans to insert money" into Fannie Mae and Freddie Mac -- and then turned around and committed $200 billion in capital and credit lines to those corrupt, bloated, crumbling institutions.

This is the man who declared that "the worst is likely to be behind us" in May 2008.

Emperor Paulson's bipartisan courtiers in Congress berated anyone who dared challenge his wisdom. Minority Leader John Boehner sniffed: "This is no time for ideological purity." Well, ideological pollution begat this mess. It's time for a fiscal-conservative counterinsurgency to disrobe and disarm the charlatans before they do more harm.

US vs. Russia: Watch These Two Military Recruitment Videos and You'll Quickly See Why We're 'So Screwed'
Townhall
'Yeah, THAT'S the ticket!' Jon Lovitz takes on HORDE of STUPID after sharing story of Canadian man bragging about NOT working because govt pays him
Twitchy
Report: Colonial Pipeline Paid Ransom and Biden Team Has Been Buffaloing Us for Days
Redstate
Insanity Wrap #206: The Left Loves Nothing Like Women-Oppressing, Gay-Murdering Terrorists
PJ Media