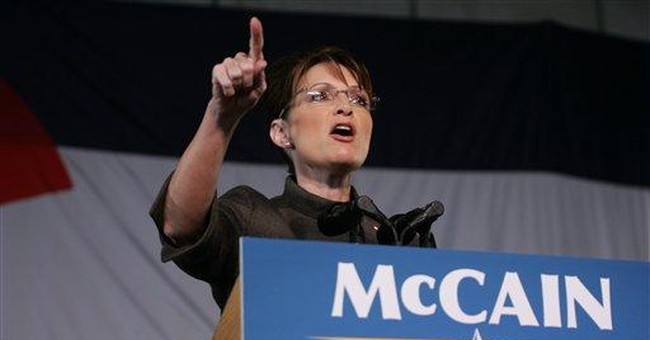 Actor Matt Damon, parroting left-wing Internet lies about Sarah Palin censoring novels while mayor of Wasilla, Alaska, took a defiant stand against the "terrifying possibility" of a McCain-Palin victory. "We can't have" book-banning, he inveighed.

And now we know what keeps feminist playwrights like Eve Ensler ("The Vagina Monologues") awake at night. Not Iranian nuclear ambitions or al Qaeda beheading videos. She is haunted by nightmares of Bible-thumping, book-burning Sarah Palin. A McCain/Palin ticket "is one of the most dangerous choices" of her lifetime, Ensler seethed in her viral call-to-arms e-mail, because "Sarah Palin does not much believe in thinking," The evidence: "From what I gather she has tried to ban books from the library, has a tendency to dispense with people who think independently. She cannot tolerate an environment of ambiguity and difference."

Classic projection. Damon, Ensler and the anti-censorship crusaders are the unthinking ones who can't tolerate independence, ambiguity and difference. The rumormongers continue to spread a bogus banned book list attributed to Palin that includes books not even published at the time she served as mayor. No city records corroborate Internet reports that she tried to keep anti-homosexual books, as gay lobbying organizations have claimed, or any other books off government-funded library shelves available to children.

If book banning is such a life-and-death issue to these celebrity foot soldiers for free speech, where were they four years ago when John Kerry and his rabid minions were pressuring Regnery Publishing to withdraw "Unfit for Command" from bookstores? Where were they when members of the Borders Books Employee Union were openly advocating sabotaging book sales? A message on the union's members-only website urged:

"You guys don't actually HAVE to sell the thing!

"Just 'carelessly' hide the boxes, 'accidentally' drop them off pallets, 'forget' to stock the ones you have, and then suggest a nice Al Franken or Michael Moore book as a substitute ...

"I don't care if these Neandertals (sic) in fancy suits get mad at me, they aren't regular customers anyway. Other than 'Left Behind' books, they don't read. Anything you can do to make them feel unwelcome is only fair. They are the people pushing retailers to cut costs, don't forget. And they would censor your speech, your books, your music in a heartbeat, so give them a taste of it!"

Where were they when left-wing hitman David Brock of Media Matters for America sent a demand letter to Wal-Mart, Amazon.com and Barnes & Noble urging them to pull "Unfit for Command" from their shelves?

Where were they two years ago when two Democrat lawmakers, New Jersey Assemblywomen Joan Quigley and Linda Stender, called on merchants to ban the sale of Ann Coulter's book, "Godless," because of her remarks about anti-Bush 9/11 widows. "No one in New Jersey should buy this book and allow Ann Coulter to profit from her hate-mongering," the politicians lashed out. "We are asking New Jersey retailers statewide to stand with us and express their outrage by refusing to carry or sell copies of Coulter's book. Her hate-filled attacks on our 9-11 widows has no place on New Jersey bookshelves."

Where were they in 2005, when a University of North Carolina law professor, Eric Muller, called on his blog readers to get one of my books banned from a national parks bookstore? Where were they when J. Millard Burr and Robert O. Collins's "Alms for Jihad" was banned in Britain; Robert Spencer's "The Truth about Muhammad" was banned in Pakistan; and "The Jewel of Madina" was banned, well, everywhere?

And where are they now? Stewing in their salons and screenwriting rooms. Concocting horror stories about terrifying Christian conservative bogeymen who threaten peace, tolerance, independent thought, ambiguity and difference. Patting themselves and each other on the backs as the valiant protectors of dissent.

(But only the kind with which they agree, of course. Shhhhh.)