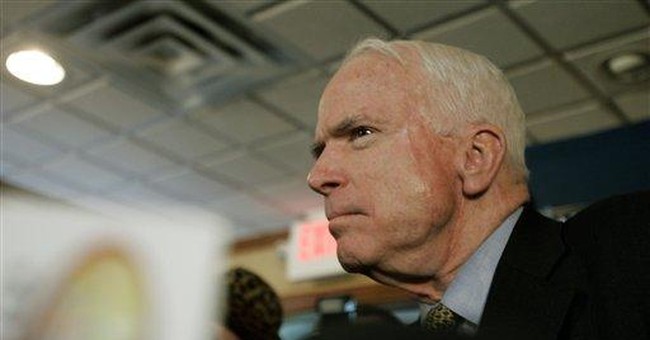 After spearheading a disastrous, security-undermining illegal alien amnesty bill last year with Teddy Kennedy, "straight-talking" GOP Sen. John McCain claims he has seen the light. In TV appearances, he vows to put immigration enforcement first. On the campaign trail, he offers a perfunctory promise to strengthen border security and emphasizes the need to restore Americans' trust in their government's ability to defend the homeland.

"I got the message," he told voters in South Carolina. "We will secure the borders first."

But how can McCain cure citizens' distrust when his own credibility on the issue remains fatally damaged? He doesn't believe his own election-year spin. And he knows we know it. This is cynicism on steroids with a speedball chaser.

His admission of the shamnesty failure is grudging and bitter. While he now tells conservative voters what they want to hear about the need to build the southern border fence, he takes a contemptuous tone toward physical barriers when talking to businessmen. "By the way, I think the fence is least effective," he told executives in Milwaukee, according to a recent Vanity Fair profile. "But I'll build the goddamned fence if they want it." Straight talk? Try hate talk.

For all his supposed newfound enlightenment about what most Americans want -- protection against invasion, commitment to the rule of law, meaningful employer sanctions, an end to sanctuary cities, enforcement-by-attrition plus deportation reform, and an end to special illegal alien benefits that invite more law-breaking -- The Maverick remains a Geraldo Rivera Republican. Like the ethnocentric cable TV host who can't string a sentence about immigration together without drowning in demagoguery, McCain naturally resorts to open-borders platitudes when pressed for enforcement specifics.

Instead of emphasizing the need for local and state cooperation with federal immigration authorities to prevent the release of illegal alien criminals or discussing 100 percent preventable crimes by illegal alien thugs who should never have been on American soil in the first place, McCain harps on open-borders sob stories. Several times over the past year, in response to citizen questioners who have expressed frustration with the lack of accountability for immigration law-breakers, McCain has responded: "I am not going to call up a soldier and tell him I am deporting his mother. ... I'm not going to do it. You can do it."

But what if that mother had stolen an American citizen's Social Security number to work here illegally? What if she had been previously deported, re-entered illegally, and had been convicted of previous crimes? What if she were part of a human smuggling ring? What if she had been working in a sensitive area -- airport security, a military base, a port? Would he still refuse to abide by his constitutional obligation to provide for the common defense and secure the blessings of liberty for law-abiding Americans?

The hothead has succeeded in intimidating voters and eluding tough questions from the press by playing his rhetorical violin. There is a reason so many liberals in the media and the Democratic Party want John McCain to be the GOP presidential nominee. He gives them cover to continue smearing grassroots conservatives.

In Michigan, the illegal alien parent-of-a-soldier story was met with boos. McCain's cheerleaders at The New York Times and other press outlets attempted to depict the detractors as insensitive and racist boors -- just as they did during last year's ill-fated shamnesty campaign.

McCain has learned nothing. What about us?