Sure, I’ll Say It: A Democrat Helped Win the Space Race 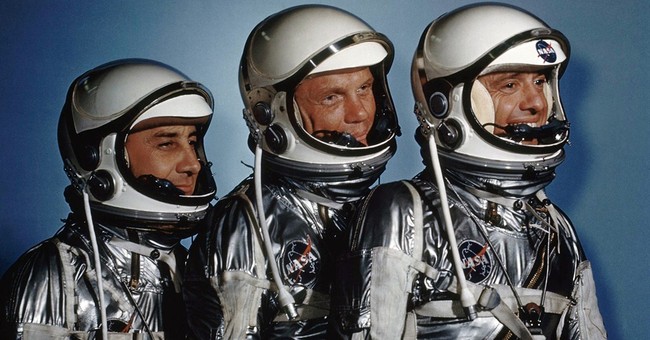 I guess it’s about time I said something nice about a Democrat. So, here it goes:

John Hershel Glenn Jr is an American hero, and an inspiration. In 1962, Glenn was finally hurled into space by a small army of government scientists hell-bent on making sure those commies in Russia didn’t dominate the Space Race. After all, the Soviets had already sent a hunk of medal, and a cosmonaut into orbit. If we were going to remain relevant in the futuristic race into space, we’d really have to step it up.

Glenn was a perfect choice for the dangerous mission. He had flown nearly 150 combat missions as a lieutenant Colonel in the US Marine Corps (the “p” is silent, Mr. Obama), and had already completed the first supersonic flight from coast to coast. (LA to New York in three hours and 23 minutes, not including security wait times and TSA background checks.)

At the time, Glenn’s mission was undertaken with reserved optimism. The Russians had already successfully sent the first human into space when Yuri Gagarin managed to complete a full flight around our tiny blue planet. (Judging by the construction of Soviet era sedans, I really don’t think I’d feel comfortable on that flight.) Americans Alan Shepard Jr, and Virgil Grissom had both achieved suborbital flights shortly after that. (That basically means they spent a few hours in space, before returning to the relative safety of earth… Kinda the way most people visit New Jersey.) It wasn’t much longer, however, that those crafty Soviets managed to send Gherman Titov on a 25 hour mission circling the earth a grand total of 17 times.

Seriously… We’re America. It was about time to show those Stalinist Marxists what we were capable of achieving.

And so, Glenn was strapped inside a rocket and shot into space. On February 20, 1962 roughly 100,000 spectators watched as the Friendship 7 rocketed away from the launch pad at Cape Canaveral just before ten o’clock in the morning. The capsule entered into orbit after reaching a cruising speed of 17,500 miles per hour. (The non-smoking lights were turned on for the duration of the flight, although Glenn was free to move 360 degrees around the cabin.)

Of course, this was 1962. Science wasn’t exactly – well, it wasn’t exactly rocket science. Trial and error was a pretty big piece of the puzzle, as illustrated by an early observation from Glenn. During his first orbit in the Friendship 7 capsule, the novice astronaut observed “fireflies” drifting by the spacecraft’s tiny window… It turns out they were crystals of water vapor released by the air-conditioning system. Near the end of the orbit the auto pilot began to malfunction, and soon it was learned that the heat shield on the base of the craft was coming loose… In other words, a Soviet Sedan might not have been a bad alternative.

After three successful orbits Friendship 7 slammed back into earth’s atmosphere for reentry. Glenn (fastening his seatbelt and adjusting his dinner tray) was along for the ride as the spacecraft was engulfed by a shroud of ions and fire. Radio contact went dead as the tiny capsule plummeted back (hopefully) toward the Atlantic Ocean.

After four grueling minutes Glenn’s voice crackled through the radio at Mission Control. With half-smoked Lucky Strikes smoldering in their ashtrays, NASA scientists erupted into celebratory applause as the USS Destroyer Noa headed out to pick up America’s real-life Flash Gordon.

Three days after he was flung into space, John F Kennedy visited the astronaut at Cape Canaveral. Glenn received a ticker tape parade, a visit to Congress, and eventually four consecutive terms as a United States Senator from the state of Ohio… And in 1998 he finally returned to the last frontier; this time as the oldest human to ever travel in space.

Thank you for your service, John.