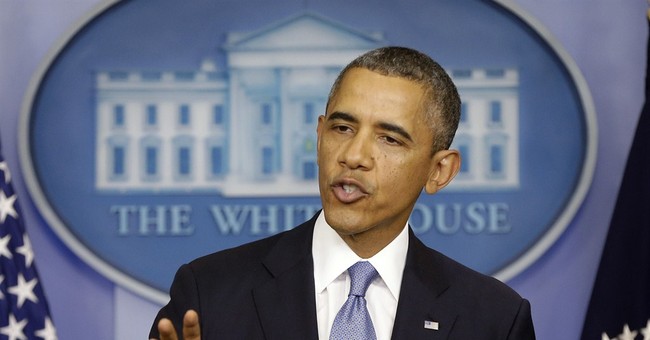 While all eleven minutes of Obama’s apocalyptic “government shutdown” speech is well within the definition of “disingenuous”, there was one mundane comment that demands attention. The comment was more or less a throwaway line, aimed at illustrating the gravity of a government shutdown. Startling, the President uttered a fact during his 11 minutes of blaming Republicans. The Federal Government is, in fact, the largest employer in America.

“The federal government is America's largest employer” Obama reminded the press as he launched into a childish explanation of Keynesian economics. And now, some of those “non-essential” employees might be getting furloughed. (Inexplicably, Congress is still set to show up to work.)

Let’s put that into perspective:

Walmart has a stunning 2.2 million employees. The next largest employer is a Temp Agency – indicative of the part-time Obama-economy. . . But, the Federal government seems to be rolling right along -- with the capital raised from all those smaller businesses that independently produce wealth and innovation -- with well over 2.5 million Federal workers.

The Federal Government, unlike Walmart or any other private enterprise, is unaccountable to business models, market concerns, or even customer satisfaction. After all, where else can one take their business if they are unsatisfied with the level of harassment they receive from the IRS? And while the government, no doubt, has a large number of “essential” personnel, their quality of service (not to mention their constitutionally limited size) hardly merit over 2.5 million workers. (Although, in all fairness, Obamaphones are a far greater deal for consumers than anything at Walmart.)

Furthermore, the Federal workforce is not exactly indispensable contributors to the nation’s economic health. That’s not to say that many of them hold indispensable responsibilities that are essential to the continuation of any civilized society. . . But they are not net contributors to the nation’s economic growth. (Hehehe. . . I’m giving John Maynard Keynes a posthumous mini-stroke.) While it is true, as the President outlined in his speech (and Keynes argued to a fault), that these employees spend their hard earned paychecks at various businesses throughout their communities, they are not creating wealth with their hard earned labor.

After all, where did they get their money come from? The US Treasury? Where did the Treasury get the money to pay these dedicated 2.5 million workers? (Those are rhetorical questions, but for the sake of clarity here’s your answer: the private sector.) The money that is spent at the mom-and-pop grocery store by a government employee, was first taken from another mom-and-pop grocery store through taxation. To argue that wealth is created by taking money from the private sector (who arguably could have invested it wiser than our all-knowing Federal Government), and giving it to public sector employees (who may-or-may-not be members of a burdensome regulatory agency) is not sound theory for economic discussions.

And with our fractional reserve banking system, even if it had remained in the bank we would still have seen the Keynesian “multiplier” effect as the bank made loans based off their reserves.

In other words: regardless of their necessity, Federal employees are not largely beneficial to the economic growth of the nation. After all, if they were, why doesn’t the government simply hire all the nation’s unemployed to complete mundane tasks? Unemployment, and our anemic economic recovery, would be a thing of the past – according to Keynesians like Obama. And don’t worry, I’m not giving the Liberals in DC any new ideas. (They probably wouldn’t make it to this paragraph anyway.)

So while the furlough of a Federal Worker (who will likely get back-pay for their time away from work) might be heartbreaking to some along the DC beltway, it is hardly the end of the world. . . Or even the government. To the extent that a government shutdown will place inconveniences or burdens upon private industry, it should be a sign of the government’s overreaching involvement in our lives.

The accidental “fact” that Obama read from his prepared remarks is yet another demonstrable indication of government growth in the modern era. Businesses of all sizes, have had to evaluate what personnel are needed, or not needed, and make the regrettable choice to tighten their ranks. Dedicated employees, of private businesses, have seen their hours cut and their jobs jeopardized by an increasingly burdensome web of regulatory framework. And yet, Washington is panicking over the prospect of being incapable of legally borrowing enough money to fund their growth.

In a truly free nation, such a shutdown should go largely unnoticed. But something tells me this was not the train of thought Obama was looking for when he casually mentioned the enormity of the Federal government.