The GOP Did Good in Iowa

Michael Reagan
|
Posted: Feb 05, 2016 12:01 AM
Share   Tweet
The opinions expressed by columnists are their own and do not necessarily represent the views of Townhall.com. 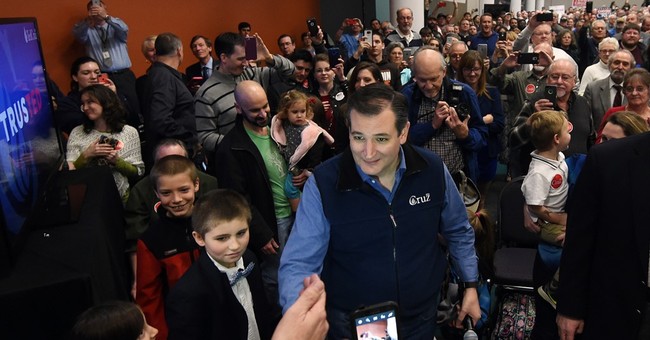 I don't know how the primaries will turn out in New Hampshire next week.

But I was glad to see Republican voters in Iowa prick some of the air out of the Trump balloon Monday night and lift Ted Cruz and Marco Rubio to the top of the GOP heap.

All Iowans didn't get caught up in the Trump celebrity or go goofy for the Trump plane.

A lot of them looked at the Donald's political substance -- and realized he didn't have any. Not in politics, anyway.

Going forward, however, conservatives still have the same problem they've had for months. Too many good horses clogging up the race.

They need to find their best horse quickly and ride it. Otherwise, they'll split the conservative vote again and give the nomination to a moderate or a fake Republican like Trump who won't win in the fall.

It happened with John McCain in 2008 and again with Mitt Romney in 2012. Too many conservatives in the race splintered the conservative vote.

There were 12 Republicans still trying to win the nomination in Iowa. Eleven of them were virtually interchangeable conservatives. One was a billionaire pretending to be one.

Even with Mike Huckabee, Rand Paul and Rick Santorum dropping out, there are still way too many candidates splitting up the conservative vote.

Ben Carson should be next. And what's Jim Gilmore waiting for? Where did he come from anyway? And why?

The ex-Virginia Governor got a whopping 12 votes from Iowa caucus-goers - .01 percent. That has to be a Guinness world record for last place in any election. "Other" was chosen by 119 people.
CARTOONS | Tom Stiglich
View Cartoon

Still, the results in Iowa were encouraging for the Republican Party. If I had to pick a single big winner, I guess it has to be Cruz.

Congratulations to him. He's good. He's great. But at the end of Monday night, I think Rubio shined brightest.

He finished a close third to Cruz, plus he gave a great speech after the caucus while Cruz's speech was too long, too religious and too awful.

Rubio gave the most Reaganesque talk. He spoke to everyone, while Cruz spoke - and spoke -- to evangelicals.

Let's put it this way. If Cruz had been on the old "Gong Show," he'd have been gonged and yanked from the stage.

I understand why the three governors - Bush, Christie and Kasich, who collectively didn't get 8 percent of the vote in Iowa -- want to stay around for New Hampshire. It's their last shot.

But if they really want to help the conservatives, it's time for some of those guys to go home too.

The goal of this primary race is to win back the White House. To do that Republicans need a message that's inclusive and welcoming to minorities.

Iowa, in case you didn't notice, the Republicans are no longer the party of angry old white men.

About 65 percent of caucus votes went to Cruz, Rubio and Carson -- Republicans who, last time I looked, are Latino or black.

Compare that with the Democrats, who like to pass themselves off as the all-inclusive party that speaks for minorities.

Now that that 53-year-old whippersnapper Martin O'Malley has dropped out of their primary, Democrats literally have an old white guy trying to beat out an old white gal.

It wouldn't hurt if once in a while the mainstream news media pointed out the irony of the Democrats running two old fogies for president whose leftist policies were discredited in the last century.

Meanwhile, the Republicans' diversity is a huge plus. It needs to be publicized and applauded from the rooftops by the GOP.

Based on what happened in Iowa, the Party of Ronald Reagan looks like it might have a conservative future after all. It'll just have a different hue.