Mr. Gorbachev, Would You Please Consider Tearing Down This Wall? 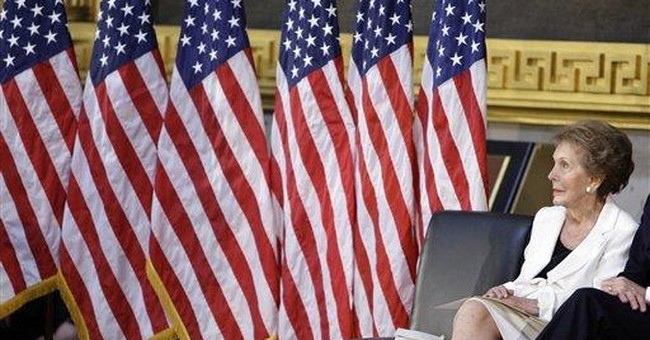 In conjunction with my Reagan Legacy Foundation, I recently marked the 22nd anniversary of my father's famous speech at the Brandenburg Gate in Berlin by publicly announcing an agreement with the Mauer Museum to permanently house a wing dedicated to Ronald Reagan and his leading role in ending the Cold War and reuniting the German people. During a related press event, I was able to share the story about the drafting of the speech, recalling that officials at the U.S. State Department were less than impressed with my father's draft. In fact, they went so far as to have crossed out the most famous and confrontational paragraph challenging President Gorbachev to tear down the Berlin Wall.

You see, some folks at the State Department felt that by taking an aggressive stance towards the Soviet Union the United States would make them feel further threatened and isolated -- as if appeasement had ever worked. Rather than succumbing to the bureaucratic methodology of "peace through submission," my father believed and practiced a policy of "peace through strength."

My trip caused me to think about our nation's current foreign policy approach -- one far distant from that of my father and other successful presidents. This distance has been further magnified by recent events in Iran, where Iranians, young and old, have turned out in the streets to protest against a clearly fraudulent national election.

While this international challenge is particularly tricky when coupled with the growing threat of a nuclear-armed Iran, it is imperative that our nation continue to serve as the beacon of democracy and act accordingly. This is especially true when people yearning for freedom are repressed, attacked and even murdered -- their sole "crime" being peaceful protest in advance of a democratic agenda.

While recognizing the need to maintain a focus on the Iranian protesters rather than on statements coming from Washington's Pennsylvania Ave., President Obama's initial, timid approach to this crisis was certainly troubling; it sent the wrong message to all sides in the Iranian conflict. Furthermore, it sent a troubling signal to America's enemies across the globe who now feel that careful words and negotiation are the tip of the spear of America's foreign policy rather than a strong and vibrant defense of democratic principles.

Serving as our nation's commander in chief and leader of the free world requires deliberate and decisive acts and statements. It also requires a sense of the moment and a willingness to lead in a way that promotes democracy while serving notice to those who view the world differently than us -- those who view democracy as a threat to their oppressive regimes.

Here, rather than acting in a way that pacified cautious bureaucrats at the State Department, President Obama needed to immediately demonstrate America's solidarity behind Iran's protesters. Rather than continuing to seek to pacify the Ahmadinejad regime, the administration needed to demand free and fair elections.

President Obama needed to unapologetically demand that Ayatollah Khamenei and President Ahmadinejad tear down the proverbial wall that continues to separate Iranians from their freedom. He needed to seize the moment by finding his own paragraph of strength -- one that career diplomats may have found too demanding. Doing so may have proven to be the act that launched a historical democratic movement -- the same way East and West became united some 20 years ago.