Thanksgiving 2015: Pleasure at the Pump 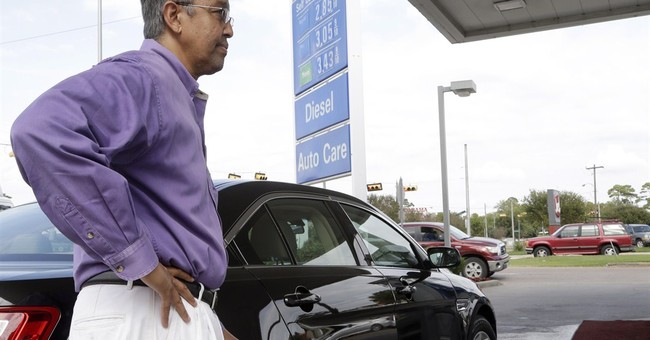 One of the big news stories “above the fold” this week is how motorists are thrilled with the lowest gasoline prices for Thanksgiving week since 2008. Across over half the nation, gasoline is below $2.00 per gallon, and expected to drop even more between now and year’s end.

GasBuddy.com says prices are about .80 cents per gallon lower than last year, and $1.29 cheaper than 2013. The longer you wait to fill up this weekend, they say, the cheaper it’s likely to be.

From a domestic oil producer’s perspective, this is obviously not so much music to our ears. A trifecta of factors is contributing. One, oil is approaching $40 as the US dollar and inventories continue to climb. Crude had two news-driven spikes this week. First was before the market opened Monday when the wires began reporting some possible sense out of Saudi Arabia, as there appears to now be some agreement between their Cabinet (the budgetary side) and the Royals (the spending side) about balancing oil prices. That headline alone was enough to bump crude about 3-percent, but that spike was short lived.

The second was Tuesday when Turkey downed the Russian fighter, sending oil back up 3-percent, with West Texas Intermediate spending most of the day above $43.00. With increasing tensions abroad, these kinds of swings could be more likely. A sequence of them could tap the brakes on gasoline’s slide.

The next factor affecting gasoline is seasonal. Refineries coming back online after fall maintenance and the switch to winter blends. That equals more supply; a typical phenomenon preceded every fall only by the emergence of pumpkins. AAA is estimating some 42-million Americans are on the roads this week, traveling over 50 miles.

The third factor, the one not getting as much press, is anticipatory. The markets are still expecting the Federal Reserve to bump rates slightly December 16, ultimately adding support to the US Dollar; they are peering into first quarter 2016, when Iranian oil should hit the market; and they see worldwide softness across other commodities, pointing to lower demand.

To that end, the paradox between extremely low commodity prices (indicating weak global demand) and the recent buoyant US stock market, continues without full explanation. Perhaps US stocks are fidgety prior to the mid-December FOMC announcement, hoping this time “she finally does it.” That would indicate the Fed is convinced the US economy is strong enough to sustain an increase after an unprecedented 9-years of stimulus.

Good news, bad news. Bad news, interest rates are likely going higher. Good news (in theory) is the domestic economy is too. But if that is indeed the case, why are commodities still going south? Typically the price of raw materials precedes demand; thus prices this low would indicate economic anemia.

Which begs the question: Is the American public being sold another ‘bag of goods’ from Washington, D.C.? Obviously, we won’t know on this one until mid-December, but at least the pre-Paris jawboning indicated there would finally be an increase this time.

Let’s review the evidence. The US consumer is not spending, and now there are reports of reduced traffic in public places like malls. Inflation is low and falling. Producer prices fell again last month. Copper is at a six-year low and has been pushing down, indicating no uptick in industrial demand. Japan is in recession, twice in as many years. China’s economic woes have been more than well publicized.

We’ve been told, among other things, we need an overhaul of the healthcare system, and now tens of thousands of Americans are facing astronomical deductibles or abandoned coverage, as more and more insurers jump overboard from the USS Obamacare. We were abruptly told the Keystone XL pipeline would not be in our nation’s best interest, in spite of a multitude of academic, governmental, economic and scientific studies to the contrary. Most recently, we’ve been told we absolutely had to negotiate a nuclear agreement with Iran and reinstate their position as a good-faith partner in the world’s economic system.

And now, are we on the brink of being told the economy is good enough to withstand a rate increase? All these factors are contributing to why there’s pleasure at the pump this week, and why it may likely continue. For consumers, that’s certainly direct ‘in-the-pocket’ relief from the rest of the storms around us.

The old saying that gasoline prices shoot up like a rocket and trickle down like a feather hasn’t applied as much these last two weeks. Prices are dropping quickly, underscoring the market’s sour tone.

As you enjoy friends, family and some turkey today, keep an eye on the fundamentals that are producing these low gasoline prices, and realize that under the covers, it may not be as pleasurable as it appears at the pump.

Meanwhile, enjoy some cheap gas the rest of the year.