Are Black Victims of Police Brutality the Only Ones that Count? 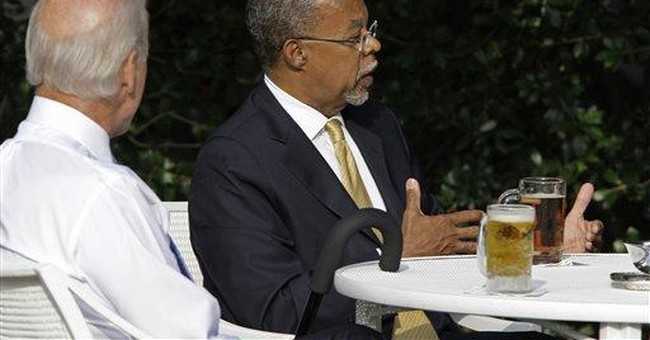 Why do some victims of alleged police brutality merit more attention than others?

Why should the trivial inconvenience suffered by Professor Henry Louis Gates become an international obsession while major media outlets continue to ignore the disabling brain injuries of Christopher Harris?

Isn’t it obvious that the stark contrast in the treatment of the two cases by politicians and the press stems from the fact that Gates is black and Harris is white?

Harris is a 29-year-old from suburban Edmonds, Washington who had driven to downtown Seattle on Sunday night, May 10th. Unfortunately for him, police received reports that same evening of a bloody brawl in a bar that later spilled out onto the street. A female witness wrongly identified Harris (now acknowledged by all as an innocent bystander) as a participant in a knife fight, and two King County Sheriff’s deputies tried to approach him. According to eyewitnesses, the deputies never identified themselves as law enforcement officers and in the darkness Harris didn’t recognize them as cops. Frightened by the encounter, he ran for several blocks as the determined deputies gave chase. Eventually, Harris slowed and stopped in front of the popular Cinerama movie theatre, at which point Deputy Matthew Paul lunged at him, knocking Harris off his feet and inadvertently slamming the back of his head against a concrete wall.

For several days, Harris failed to regain consciousness and his brain injuries may well leave him permanently disabled. More than two months after the tragic incident, his family’s attorney told the Seattle Times that “he has responded to some simple commands, and the family is hopeful they will be able to move him soon to a place where he can get more aggressive rehabilitative care.”

Despite the grim outcome, prosecutors decided that no charges would be brought against the deputies involved. An official statement explained: “The law provides that an officer ‘shall not be held criminally liable for using force without malice and with a good faith belief that such an act is justifiable.’ Christopher Harris was identified by witnesses to officers as a suspect in a violent crime. He ran for several blocks after he was told to stop by uniformed officers. As the deputy caught up to him, the deputy used a standard takedown procedure. As a result, no criminal charge can be filed.”

Prosecutors announced this seemingly reasonable decision just days after the celebrated “Beer Summit” at the White House brought together Professor Henry Louis Gates, Sergeant James Crowley and President Obama. The contrast in media treatment of the two episodes left a striking impression. Christopher Harris spent weeks in a coma and may never resume a normal life, but his case drew scant protest and no national attention. The brief Crowley-Gates confrontation, on the other hand, produced no lasting damage and involved no use of force by either party, yet President of the United States and a host of other eager commentators leapt on the case as a damning symbol of police misconduct and prevalent racism.

There is, in fact, no evidence whatever that race played a role in the police response to Professor Gates. The Good Samaritan 9/11 caller who first contacted law enforcement never identified the suspect as black, and Sergeant Crowley has a long, distinguished record altogether untainted by any hint of racial bias. There’s no basis to assume that he would have treated Professor Gates any more leniently had the academic been white, just as there’s no basis to assume that Deputy Paul in Seattle would have treated Christopher Harris any more harshly had he been black.

In police work, mistakes and accidents happen even to the most skillful and dedicated officers. Some of those errors and mishaps may involve race, but it makes no more sense to claim that every harsh episode involving a black victim expresses racial hatred, than to assume that every time a white suspect gets off easily it’s because of racial preference.

The Harris case deserves consideration, but not as an example of police malfeasance; in fact, video of the fateful “takedown” (shot by a surveillance camera) suggests that the deputy never intended to inflict serious injury. But it’s still a useful reminder of the obvious fact that many (and perhaps most) victims of aggressive law enforcement tactics across the country are white, not black.

Why, then, does every famous, well-publicized episode of controversial police brutality involve an African-American (or, more rarely, a Latino) male?

It’s not because episodes involving white suspects never occur. It’s because those incidents never seem worthy of serious indignation or attention, because they fail to fit the familiar narrative of police racism so beloved by the media, politicians, and academics.

Which brings us back to the odd instance of the Crowley-Gates misunderstanding, and the ongoing efforts to place that six minute interchange (the time between first encounter and arrest) in a racial context.

It’s simply not true to say that the entire episode would have unfolded in exactly the same way had Professor Gates been white. Yes, Crowley might well have behaved the same way. But try to imagine another famous Harvard academic—a non-black academic --- responding to a cop at his front door, checking on a reported break-in and asking for ID. Would a white professor fly into a rage, instantly accusing the officer of bias and misconduct?

In this sense, race did play a crucial role in the incident after all, but not through any evidence of racial bias on the part of Sergeant Crowley. It was, rather, the racial obsession of Professor Gates that turned a routine visit from a by-the-book cop into a symbol of eternal oppression.

Yes, it’s possible to argue that Sergeant Crowley shouldn’t have asked for identification once he saw the professor in his own house, and maybe he should have laughed-off the insults and hysteria from Gates and walked away without making an arrest. Still, it’s possible to justify his actions every step of the way – but it’s not possible to respect the reactions of Professor Gates.

Again, imagine a white professor so clearly losing control of his emotions and blowing up at a cop who was simply trying to do his job. No one (no, not even the president, if he repeated the hideous mistake of getting drawn into the debate) would hesitate in criticizing a white homeowner in an identical situation.

Why, then, the near-universal public impulse to explain and excuse the behavior of Henry Louis Gates?

Offering those explanations and excuses with reference to the long history of strained relationships between cops and the black community still amounts to a double standard based on race: in this case, a famous black guy gets treated far more favorably than would a famous white guy in the same predicament.

And on the other side of the country, in liberal and enlightened Seattle, an unlucky white innocent named Christopher Harris sees his own potential grievances largely ignored because his case fails to fit the convenient, cherished, one-dimensional media template of black victimhood.