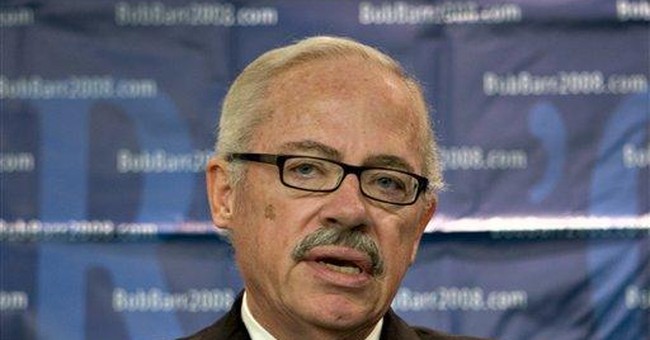 Final returns are still weeks away, but it's not too early to acknowledge one of the big surprises of the presidential election of 2008: the disastrous decline of fringe party candidates in a year that once seemed ripe for their efforts.

As recently as November, 2007, CNN's Lou Dobbs flatly predicted that neither a Democrat nor a Republican could win the White House this time: the certain victor, he declared, would be an Independent or the representative of some newly emergent protest party. His book, "Independents Day: Reawakening the American Spirit," became a major bestseller.

On a similar note, Douglas E. Schoen, former campaign consultant to President Clinton, published "Declaring Independence: The Beginning of the End of the Two Party System" early in 2008, also heralding a breakthrough year for a third party contender who could plausibly capture the White House. Meanwhile, a group known as "Unity '08," comprised of former officeholders and prominent political operatives from both major parties, promised a "Re-United States of America" and promoted an independent fusion "ticket" that would feature a former Democrat and a former Republican as running mates. For several months, speculation surrounded New York Mayor Michael Bloomberg who talked of funding his own campaign to the tune of more than $500 million; before he rejected the idea, Bloomberg reportedly discussed running together with outgoing Senator Chuck Hagel from Nebraska.

Even after these dreams of some independent "unity ticket" began to fade, energized Third Party activists continued to proclaim 2008 as a potential breakthrough year. The Libertarian Party, which had fielded little-known ideologues (like 2004's nearly invisible Michael Badnarik) as its presidential candidates for more than two decades, finally secured a well-known former Congressman (Bob Barr of Georgia) to head their ticket. On the left, the Green Party welcomed the candidacy of another former House member from Georgia: the fiery and charismatic Cynthia McKinney. The Constitution Party, fanning conspiratorial fears of a "North American Union" and 9/11 as an inside job, selected radio preacher Chuck Baldwin. And two much-publicized perennial candidates – Ralph Nader on the left and Alan Keyes on the right – launched their own vigorous independent campaigns.

Amazingly, despite all the expectations and activity, these minor party contenders have made little headway. In major polls within two months of the election, none of them drew support from more than 2% of the electorate. Since third party candidates always perform better in polls than they do in the actual returns (because citizens feel more reluctant to waste their ballots once they're in the voting booth), most election experts expect that all five of the major-minors --- McKinney, Barr, Baldwin, Nader and Keyes – will draw less than 2% combined.

In this context, it's reasonable to ask what happened to "Independents Day" or "The Beginning of the End of the Two Party System"?

For one thing, both Republicans and Democrats nominated candidates with strong appeal to cantankerous independents: John McCain and Barack Obama each bucked their party establishments while deploying post- partisan rhetoric against the bickering and gridlock in Washington. Both major candidates claim credible credentials as reformers and promise to break with the painfully polarized politics of the recent past.

The exciting and free-wheeling primary season also served to undermine the familiar protest candidate charge that the major parties shut out dissenters and insurgents. For the first time in fifty-six years, neither a sitting President nor a sitting Vice President ran for the White House so that neither party turned to an obvious front-runner. Both McCain and Obama had been dismissed as hopeless long-shots months before the primaries actually began, and both claimed their nominations only after spirited and highly competitive primary campaigns.

At the same time, Dennis Kucinich and Mike Gravel on the far left and Ron Paul and Tom Tancredo on the far right. ran energetic campaigns for major party nominations, earning considerable exposure on the dozens of nationally televised candidate debates. The combination of intense publicity and strictly limited success for these efforts may have sapped some of the ideological energy that otherwise might have coalesced around some of the fringe candidates in November.

Finally, there's evidence that despite all the premature obituaries for the long-established major parties, the public may have developed a more mature and realistic attitude toward quixotic minor party efforts. Ralph Nader's campaign in 2000 almost certainly represented a turning point: Nader won 2.73% of the final vote and his relative strength in several key states (famously including Florida) almost certainly tilted the unforgettably close election to George W. Bush. In the bitter aftermath of the disputed result and Al Gore's defeat, countless Americans learned the eternal lesson of third party efforts: these campaigns always do the most damage to the serious candidates closest to them ideologically. This message came across at a time when voters had already wearied of the disillusioning electoral antics of Ross Perot: he drew 18.9% and 8.4% in his quixotic campaigns of '92 and '96, respectively, but his "movement" promptly disappeared when the eccentric billionaire lost personal interest.

As a result, the votes for minor party candidates plunged precipitously in 2004. Four years earlier, the three major third-party contenders (Nader of the Green Party, Pat Buchanan of the Reform Party, and Harry Browne of the Libertarians) drew a grand total of 3,718,000 votes. But in 2004, despite 10 million more votes cast overall, the top minor party candidates (Nader, again, of the Greens, Michael Badnarik of the Libertarians, and Michael Peroutka of the Constitution Party) polled only 1,006,000 between them---barely one-fourth the total of just four years before.

In 2008, with another close contest in a national race universally hailed as deeply significant, the number of votes diverted to meaningless, frivolous minor party adventures will probably shrink even further. Along with the greater openness and unpredictability in the primary process, the embarrassments of recent fringe candidacies have helped convince the overwhelming majority of Americans that they can only make a real difference by exercising their precious franchise within the two party system.