Fair to Compare Obama and Lincoln? 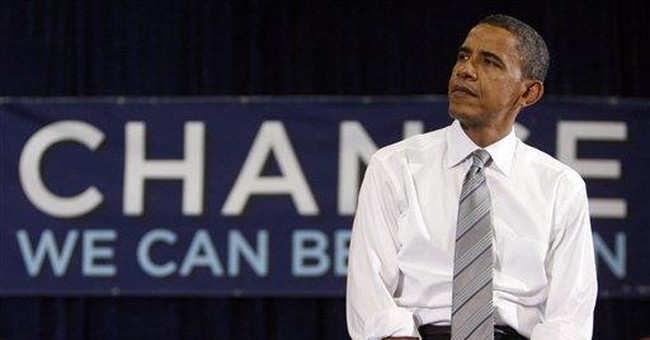 Does it make sense to compare Barack Obama to Abraham Lincoln?

In order to answer widespread objections to the Democratic nominee’s lack of leadership experience, his supporters have developed the annoying habit of citing the sainted sixteenth president as another titanic, world-shaking and divinely anointed figure who ascended to the presidency after few prior accomplishments in politics. According to this misleading analogy, Lincoln lacked an appropriately presidential resume, just as Obama does, and shocked the political establishment of his time in much the same way that today’s Democratic candidate threatens business-as-usual in Washington. True believers feel confident that the absence of qualifications for Barack will block his path to glory and greatness no more than Honest Abe’s shortage of pre-Presidential accomplishment kept him off Rushmore.

·        Both men came to Washington to represent the state of Illinois, though both were born and raised elsewhere (Lincoln in Kentucky and Indiana, Obama in Hawaii and Indonesia)

·        As boys, the two future candidates yearned for absent parents—Lincoln for the kindly, illiterate mother who died when he was nine, and Obama for the self-destructive father who abandoned him when he was two

·        They each worked as lawyers, and each served 8 years in the state legislature in Springfield

·        They each expressed impassioned opposition to controversial wars (the Mexican War in Lincoln’s case, the Iraq War for Obama) at a time when most of their fellow citizens supported those conflicts

·        Both men became nationally famous on the strength of one eloquent and celebrated speech --- Lincoln’s “House Divided” speech of January, 1858, and Obama’s Keynote Address at the Democratic Convention of 2004.

While Obama’s acolytes love to cite their man’s superficial parallels with Lincoln they pointedly ignore the far more significant differences –contrasts that serve to highlight the truly unprecedented flimsiness of the current candidate’s qualifications..

Yes, it’s true that Obama has actually served more time in elective office than Lincoln before his Presidency– nearly 12 years for Barack to Abe’s 10 full years. But you can’t compare the depth or duration of their involvement in politics:  Lincoln became a Presidential candidate 28 years after his first run for public office; Obama announced for the White House a mere twelve years after his debut candidacy for state legislature.

More importantly, Lincoln spent the better part of three decades deeply involved in party politics, working passionately for other candidates and causes even when not a candidate himself. At age 23, Honest Abe labored tirelessly to try to elect Henry Clay as president, and he toiled prominently in Clay’s two subsequent White House campaigns as well. In 1840, he traveled throughout the Midwest, stumping for William Henry Harrison for President and stood as a Harrison elector. In 1848, he ardently backed Zachary Taylor for President and traveled more than a thousand miles (including visits to Massachusetts and Maryland) to campaign in his ultimately successful race. As a loyal Whig, he played an influential role in dozens of local and statewide races, winning respect as a sagacious, wily electoral operator.

In contrast, Barack Obama played no significant role in any political campaign until he became a candidate himself at age 35. Unlike most budding politicians, his student years at Occidental, Columbia and Harvard provide no evidence of enthusiastic involvement in the partisan battles that raged throughout the era, no desire to do battle for Mondale-Ferraro, or Michael Dukakis, or Bill Clinton, or Al Gore. He did participate in a successful voter registration drive in 1992, but the only candidate who ever managed to inspire his personal commitment or dedication was himself.

Moreover, the young Obama never tried for a leadership role in his own party, as Lincoln did from the beginning of his career. After his arrival in the Illinois legislature in 1834 (at age 25) Abe became floor-leader for the Whig Party and chairman of the powerful finance committee. After leaving the U.S. Congress in 1848 (he faced a daunting fight for re-election), Lincoln received an offer of appointment as governor of the new Oregon Territory but turned it down because of his political ambitions in fast-growing Illinois. As the Whigs began to collapse over the slavery issue, Lincoln played a leading role in organizing the new Republican Party in Illinois. He returned briefly to the legislature in 1854, then ran for the U.S. Senate – withdrawing at the last moment before the legislature’s final vote for a new Senator in order to preserve party unity. He ran again for the Senate in 1858, challenging the nation’s most prominent and powerful Democrat Stephen A. Douglas, electrifying the public in every corner of the nation with their famous debates. By contrast, Barack Obama waged his one U.S. Senate campaign against a carpet-bagging embarrassment and fringe candidate (Alan Keyes) who took the Republican nomination after the formidable prior contender withdrew in a divorce-related sex scandal.

Aside from the vast differences in the scope of their political involvement, Lincoln and Obama followed sharply divergent paths in pursuit of their private sector careers. Obama chose to devote himself principally to the non-profit world: spending years as a community organizer, lecturer at the University of Chicago, and civil rights lawyer. Lincoln, taking a break from full-time politics in 1849, aggressively built up his reputation and personal wealth as a business lawyer, particularly for railroads. He handled more than 5,000 cases, and became known as one of the top corporate attorneys in the state, if not the nation.

Lincoln also compiled another experience that Obama never approached. In 1832, he responded to the governor’s call for volunteers and enlisted in the militia to battle a bloody Indian threat in the Black Hawk War. He quickly won election as captain of a company of volunteers, and years later said he “cherished that honor…more than nomination for the presidency.” Though he never experienced a major battle in his ninety days of service, Captain Lincoln learned the responsibilities of command and the need for quick decisions and adaptability in dangerous situations.

Finally, Lincoln displayed admirable consistency in his approach to the issues of the day throughout his political and business career. He remained a proud American nationalist determined to strengthen the union, as well as a dedicated foe of the extension of slavery. He pursued these goals relentlessly on the state and national level and the same commitments, obviously, animated his eventful presidency.

Obama’s career, on the other hand, shows no evidence of long-term engagement with particular issues or even broad aims. Hillary Clinton could boast of her leadership for more than sixteen years in efforts to reform the health insurance system but Obama (beyond eloquent backing for a deliberately vague concept of “racial justice”) can point to no lodestars that guided him in his wanderings and adventures, no national controversies that consistently engaged his attention. The backtracking, revisions and gauzy evasions characterizing the nineteen months of his presidential campaign look anything but Lincolnian in terms of predictability.

In short, the dramatic contrasts with Lincoln reveal far more about Obama than do the strained efforts to recast him in the sixteenth president’s image. At the time he announced his presidential candidacy, Obama remained so little known, so novel and exotic and unprecedented, that his campaign itself claimed to deliver some sort of radical change. Lincoln, on the other hand, had become such a familiar fixture (and fixer) in American politics by the time he ran for president that his campaign took on a reassuring, well-worn aura: they called him “Old Abe” despite his relatively youthful age of 51. No contemporaries questioned Lincoln’s candidacy on the basis of lack of experience while all impartial observers of the contemporary season note Obama’s absence of preparation for the world’s most challenging job.

Today, of course, Old Abe’s immortal words and deeds remain so compelling and fresh that even 143 years after his death, they seem perpetually young. For Obama, on the other, the gimmicks and platitudes (“We are the ones we have been waiting for!”) that seemed so fresh and vital a year ago have already begun to wear out their welcome and seem increasingly stale, tarnished, tired – and old.