J. Michael Johnson resides in Shreveport, Louisiana, and serves as senior legal counsel for the Alliance Defense Fund at its Regional Service Center for the Southeastern United States. Prior to joining ADF, a non-profit legal defense and advocacy organization dedicated to religious liberty, traditional family values, and the sanctity of life, Johnson worked as an attorney with notable law firms in northern and southern Louisiana.

Johnson is a trustee of the Ethics and Religious Liberty Commission of the Southern Baptist Convention; the founder and board member of Louisiana Family Initiatives, Inc.; associate editor of the Community Defense Council’s Community Defense Reporter; vice chairman of the Louisiana Family Forum’s Attorney Resource Council; and serves on various other boards, ministries and organizations. He has also served as a board member and as general counsel for the National Council on Bible Curriculum in Public Schools’ efforts to return its elective course to America’s public high schools, and has provided legal representation to organizations such as Focus on the Family, Concerned Women for America, Toward Tradition, the American Family Association, and Coral Ridge Ministries, and numerous family policy councils and crisis pregnancy centers.

Johnson and his wife, Kelly, are the proud parents of three young children. The Johnsons were recently honored as recipients of the 2001 Champions for the Faith award by the Southern Baptist Convention for their work in promoting covenant marriage, religious liberty and other pro-family initiatives. Johnson has been a principal drafter of pro-family legislation for Louisiana and municipalities across the country, and has been interviewed by and featured in national media outlets, including ABC’s Good Morning America, the CBS Morning News, FOX News, Time magazine, Citizen magazine, World magazine, The L.A. Times and The Washington Times, FamilyNet Television, and the USA and AFA Radio Networks. Johnson earned a B.S. in Business Administration from LSU (1995), and his J.D. from LSU Law School (1998).

Articles
The VAT in Ted Cruz’s Tax Plan is a Threat to Limited Government and the Economy
January 15, 2016 |

Children Won, Strip Clubs Zero
By Michael Johnson
When lawmakers have to choose between protecting our children and protecting the profits of a sexually oriented business, the ...
November 15, 2007

Why are so many American Educators so Afraid of the Truth?
By Michael Johnson
Silence can be golden, the wise man pointed out … but sometimes it’s just plain yellow. And there’s certainly something ...
April 04, 2007
Taking God Out Of School Leaves A Vacuum Something Will Replace
February 28, 2007 | 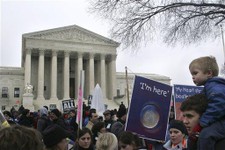 Preview of Coming Attractions: The Most Crucial Court Cases of 2006
By Michael Johnson
It’s Groundhog Day, the day when Punxsutawney Phil takes a gander at his shade and decides how much more winter ...
February 02, 2007

This Halloween, It’s The Left That’s Scared To Death
By Michael Johnson
On this week devoted to the doings of the Dark Side, it seems apropos, somehow, to pause and reflect on ...
October 30, 2006
Commentary Archives
CARTOONS | Steve Breen
View Cartoon