Obama's Point of No Return 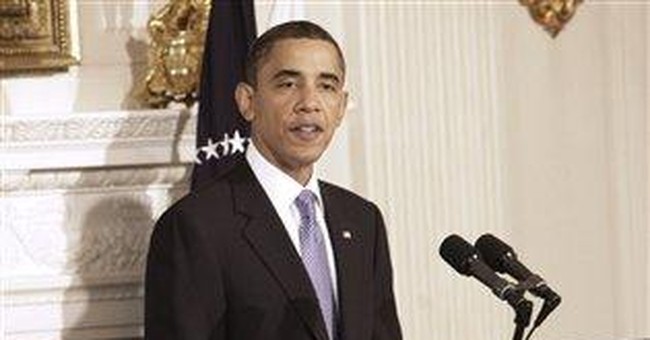 WASHINGTON -- On health care reform, the strategy of President Obama and Democratic congressional leaders is psychologically understandable -- as well as delusional.

It is easy to imagine the internal dialogue: "Well, they voted for me, overwhelmingly. I didn't hide my views on this issue; I highlighted them. If they actually knew what was in the plan, they'd support it. If I don't believe in this, I don't believe in anything. Sometimes you just have to lead."

But there is a problem with this reasoning: After a year of debate, Democratic leaders -- given every communications advantage and decisive control of every elected branch of government -- have not only lost legislative momentum, they have lost a national argument. Americans have taken every opportunity -- the town hall revolt, increasingly lopsided polling, a series of upset elections culminating in Massachusetts -- to shout their second thoughts. At this point, for Democratic leaders to insist on their current approach to health reform is to insist that Americans are not only misinformed but also dimwitted.

And the proposed form of this insistence -- enacting health reform through the quick, dirty shove of the reconciliation process -- would add coercion to arrogance. Majority Leader Harry Reid has declared that "everything is on the table" -- as though Senate Republicans and Democratic moderates were the domestic equivalents of Iran. This is the political context that Democratic leaders have set for their historically "transparent" health summit -- a threat as transparent as a horse's head in a senator's bed.

Obama now approaches the Rubicon. The Senate is in disarray. Its procedures frustrate his purposes. Before crossing the river with his army, Julius Caesar is reported to have said, "Let the dice fly high!" For what stakes does Obama gamble?

First, the imposition of a House-Senate health reform hybrid would confirm the worst modern image of the Democratic Party, that of intellectual arrogance. Parties hurt themselves most when they confirm an existing, destructive public judgment. In this case, Americans would see Democrats pushing a high-handed statism. It is amazing how both parties, when given power, seem compelled by an irresistible inner force to inhabit their own caricatures.

Third, this action would undermine Obama's own State of the Union strategy, which seemed like a shift toward the economy and away from health care reform. The White House finds it impossible to settle on a strategy and stick with it. Democrats keep being drawn back into debates -- Reid is now proposing the return of the "public option" -- they have lost decisively, as if one more spin of the roulette wheel will recover their losses.

Fourth, a reconciliation strategy would both insult House and Senate Republicans and motivate them for future fights. The minority would not only be defeated on health reform, their rights would be permanently diminished -- a development that would certainly be turned against Democrats when they lose their majority. Each side would have an excuse for decades of bitterness, creating a kind of political karma, in which angry spirits are reincarnated again and again, to fight the same battles and suffer the same wounds.

Fifth, Obama would manage to betray many politically vulnerable members of his own party, proving himself a party leader of exceptional selfishness. Because the legacy of his presidency is at stake, or because of his pride, or because he is ideologically committed to an expanded public role in health care, Obama is pressuring Democratic members to join a suicide pact. When a president doesn't care about his party, his party eventually ceases to care about him.

Democratic leaders respond: Since we have already taken the damage for proposing health reform, we might as well get the benefit for passing something. But there is always more damage to be taken on a self-destructive political path. And, in this case, there is a respectable alternative: approve and take credit for incremental reforms while blaming Republicans for blocking broader changes.

Obama's decision on the use of reconciliation will define his presidency. If he trusts in his charmed political fortunes and lets the dice fly, it will raise the deepest questions about his judgment.