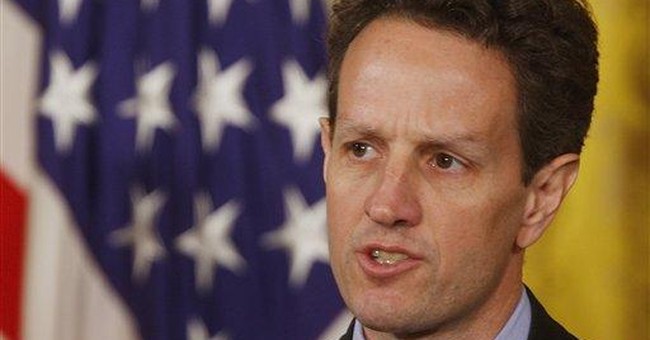 WASHINGTON -- The most famous piece of legislation passed by the 111th Congress may have nothing to do with health care or energy. It could be the Dodd amendment, also known as the Geithner amendment, or perhaps the low-level-anonymous-staffer-everyone-can-safely-blame amendment, reading in part:

"The prohibition required under clause (i) shall not be construed to prohibit any bonus payment required to be paid pursuant to a written employment contract executed on or before February 11, 2009 ... "

AIG executives were foolish to use this loophole to "retain" employees, some of whom nearly destroyed the American financial system. But the company did not act with deception or secrecy.

AIG's November SEC filing set out its intention to provide more than $469 million in "retention payments" to employees, eliciting a smattering of congressional protest. Concerns on the broader compensation issue were serious enough to ensure unanimous Senate passage of an amendment to the stimulus bill sponsored by Sens. Olympia Snowe and Ron Wyden that penalized bailout bonuses in excess of $100,000.

But the Snowe-Wyden amendment disappeared into the misty bog of a House-Senate conference committee, only to be trumped by language that grandfathered AIG's retention bonuses. At first, this seemed to be an example of immaculate legislation -- miraculously fatherless. After explicitly denying responsibility, Senate Banking Committee Chairman Christopher Dodd eventually admitted including the exception under pressure from the administration. But it doesn't sound like there was much of a fight. Administration input came from unnamed staffers at the Treasury Department, not high-level officials. Dodd said he viewed these as "innocent modifications."

President Obama vowed to "pursue every legal avenue to block these bonuses," when the proper "legal" avenue was to write a responsible law -- a process his own administration apparently undermined. "I'll take responsibility," says the president -- before, in the next few breaths, explaining, "We didn't grant these contracts." And, "We've got a lot on our plate." And, "It's my job to make sure that we fix these messes, even if I don't make them." So Obama seems to be saying: I'll take credit for taking the blame for something that is entirely the fault of others. Positively Clintonian.

"This is an example," thunders Rep. Barney Frank, "of people at the commanding heights of the economy misbehaving, abusing the system" -- which is completely true ... of the conference committee that reshaped the stimulus bill in secret. Sen. Charles Grassley urged AIG executives to contemplate suicide.

This combination of viciousness, shamelessness and cluelessness has consequences. It drains what little political will remains to confront the credit crisis -- an effort that may eventually require spending a trillion dollars or more to help purchase toxic debt. Thanks to AIG, Congress and the administration, Treasury Secretary Timothy Geithner may find his next round of necessary bailouts greeted by a revolt of left and right.

And congressional demagoguery is compromising Geithner's own approach to resolving the credit crisis. Since the direct government purchase of toxic debt would be massively expensive, Geithner has floated the idea of enticing private investors to help buy that debt. The government would give loans or subsidies to mutual funds and hedge funds if they will buy toxic securities. But few would make such a risky investment without the hope of large returns.

If those returns are realized, it is easy to imagine how hedge fund managers would be treated when hauled before Congress. "Perhaps the witness can explain to us how he justifies such windfall profits with the people's money? Have you no shame? Give us the names, addresses and phone numbers of every millionaire you enriched at public expense so we can leak them to the press."

What sane money manager would want to partner with a government that blames others for its mistakes, urges the violation of inconvenient contracts and threatens to tax benefits retroactively? One Wall Street expert told me, "Even if people trust the president, they don't trust Congress." This kind of trust and confidence is essential to the next stage of our economic recovery. It is also being actively undermined by the incompetence and hypocrisy of the government itself.