The Fallacy of the Eventual Answer 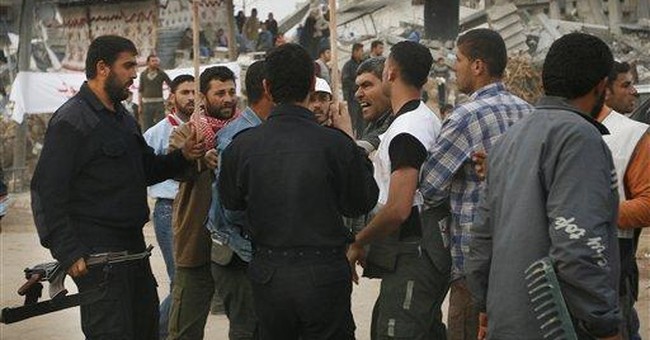 WASHINGTON -- Israel's recent operations in Gaza began in an atmosphere of criticism, including the widespread prediction that the use of force wouldn't "solve anything." Since, in this view, a negotiated peace is the only eventual answer to the Israeli-Palestinian conflict, it is a mistake for Israel to engage its enemies in an endless cycle of violence. Hamas in particular would only be strengthened.

This augury of futility was wrong. Israeli forces, responding to an intolerable provocation, inflicted lopsided casualties on Hamas, which displayed a discrediting combination of cowardice and brutality. Hamas fighters used civilians as shields instead of shielding civilians -- and some Palestinians seemed to resent it. Hamas leaders hid in the basements of hospitals while ordering public executions for Palestinian rivals, acting more like members of a criminal gang than a nationalist movement. Allies such as Iran, Syria and Hezbollah provided little practical help to Hamas, probably calculating that its rocket campaign against Israel was suicidal or at least foolishly premature. The international boycott against Hamas is holding. And the scale of missile attacks on Israeli citizens has been dramatically reduced.

"This hasn't solved the problem," Gen. Giora Eiland, a former Israeli national security adviser, told me. "But it has introduced a completely different cost calculation for Hamas." The launching of Hamas rockets against civilians now has a predictable price -- the essence of deterrence. The smuggling of weapons to Gaza through Egypt remains a challenge. But Hamas leaders are currently occupied, Eiland argues, "not just rebuilding buildings, but rebuilding their political standing and legitimacy." And this makes Hamas more likely to keep a cease-fire.

While Israel's military operations didn't accomplish everything, they also didn't accomplish nothing. But the "force doesn't solve anything" argument runs so deep for some that real-world outcomes matter little. Military action by Israel is always counterproductive, because Israel must eventually negotiate with its most bitter enemies. The sooner the better.

Call it the Fallacy of the Eventual Answer. It is true that the solution to the Israeli-Palestinian conflict is two states living side by side in peace. But it is false to say that the fight against terrorists and the security of Israel have no part in achieving that goal.

Peace negotiations generally have preconditions, including the security of both parties. If Israeli citizens are convinced that the "peace process" really means impunity for terrorists who attack them, Israel will want no part of that process. If Hamas leaders remain confident in their impunity -- convinced that their most effective strategy is to kill Israeli citizens while hiding behind their own -- they will not be in the proper mood for meaningful negotiations either. Recent military operations have addressed some of Israel's justified fears and, perhaps, tamed some of Hamas' murderous arrogance.

According to Daniel Schueftan, a senior research fellow at the University of Haifa, Israel faces a "strategic challenge -- a civilian population that lives a few miles from terrorists -- for which we don't have a strategic solution. But we have found some operational answers. In Defensive Shield (the building of Israel's security wall), we brought down suicide bombings by 95 percent, exclusively with coercive force, not politics."

Would peace negotiations be even a remote possibility if Israel were still besieged by suicide bombers, leaving bloodstains and bitterness at Israeli cafes? So the ugly but effective security wall actually served a purpose in peace negotiations. The same can be said of the establishment of deterrence through the Gaza offensive.

It is amazing that this argument remains an argument, especially after America's experience with the surge in Iraq. For years, military and diplomatic experts have argued that the ultimate solution is Iraqi political reconciliation rather than military force. Which was true, eventually. But the achievement of security through force, it turns out, was a precondition for the process of reconciliation to move forward. The Fallacy of the Eventual Answer actually delayed the peace.

We can try to imagine a world of diplomats without soldiers, but it would be no more peaceful than a society of therapists without policemen. Coercion is not the ultimate source of peace -- but peace is sometimes unachievable without it.