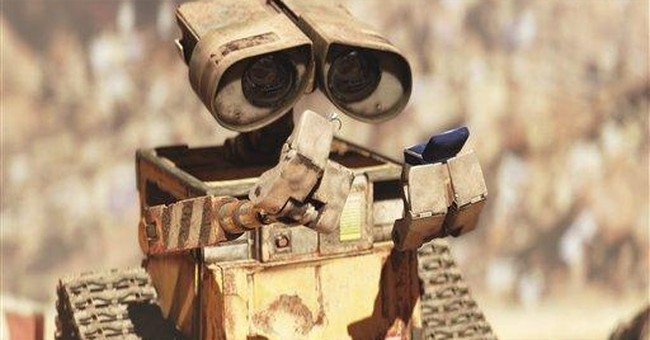 WASHINGTON -- For a children's movie, "WALL-E" begins with startling bleakness: epic landscapes of the Earth buried under the waste of endless human wants. This is the way the world ends -- not with a nuclear bang, but with a closeout sale at "Buy n Large," a cinematic hybrid of Target and totalitarianism. Humanity's only monument the mega-mall and mountains of discarded rubbish.

One wonders what a 6-year-old on a summer afternoon makes of this post-consumer apocalypse. But this grim grandeur serves the cinematic purpose of highlighting a humble flicker of revolt -- a lonely robot named WALL-E, pointlessly compressing garbage into neatly stacked cubes. During these excavations, he salvages shiny items -- Christmas lights, Rubik's Cubes, cigarette lighters -- that become (like the random collections made by children) evidence of personality, even humanity. WALL-E spends his free time endlessly watching a videotape of "Hello, Dolly!" -- a tinny, grainy remnant of romance and beauty in a world devoid of both.

Humans have long since evacuated Earth to join an endless pleasure cruise in space. A wall featuring pictures of previous ship's captains chronicles 700 years of evolutionary regression -- from bold space explorers to rotund, adult infants, incapable of walking without aid. Humans move about the space liner in floating easy chairs, consume food in oversized shakes and engage in constant, Facebook-like communication while communicating little but complaint and boredom.

Though WALL-E says only a few words in the movie, his compassion, vulnerability and endearing clumsiness awaken the dormant humanity of everyone he meets, robot and human. Making this believable is a serious cinematic achievement, combining the emotional intensity of silent movies with the remarkable vistas of science fiction.

But there is a deeper purpose to "WALL-E." Without revealing too much of the plot, the spell of self-involved consumption is eventually broken by a combination of music, natural beauty, holding hands and dancing (the space ballet of WALL-E and his lethal love interest is elegant and memorable). Unlike some horror movies, this "alien" spreads a contagion of humanism. Unlike the pessimistic visions of "Westworld" or "2001: A Space Odyssey," the robots revolt in favor of humanity.

Some conservatives have dismissed "WALL-E" as a crude critique of business and capitalism. This is only true if capitalism is identical to boundless consumerism -- a conviction that Adam Smith did not seem to share. Smith argued that human flourishing requires "good temper and moderation." Self-command and the prudent use of freedom are central to his moral theory. And these are precisely the virtues celebrated in "WALL-E." The end credits -- worth staying to see -- are a beautiful tribute to art and work, craft and cultivation.

"WALL-E" is partly an environmental parable, but its primary point is moral. The movie argues that human beings, aided by technology, can become imprisoned by their consumption. The pursuit of the latest style leads to conformity. The pursuit of pleasure displaces the deeper enjoyments of affection and friendship. The pursuit of our rhinestone desires manages to obscure our view of the stars.

If the mega-mall is the symbol of decadence in "WALL-E," the symbol of renewal is the musical "Hello, Dolly!" And it is not so strange a choice. The musical is the great, underestimated American art form, likely to last for centuries. Particularly in their golden age, Broadway musicals epitomized a belief in the triumph of love, hope and choreography. "WALL-E" manages to reconstruct an entire world in the moral image of the musical -- passing along its cultural relics of tenderness, emotional longing and grace. It is a tribute to "WALL-E" -- and to the geniuses at Pixar who made it -- that this movie, in some distant and desperate future, could serve the same cultural purpose.

What is perhaps most surprising about "WALL-E" is its daring. Not the false daring that transgresses lines of brutality or taste. Rather, the daring of savagely lampooning people in padded lounge chairs consuming supersized drinks -- who suspiciously resemble audience members (including me) in a luxury theater. The daring of attacking a culture of consumption that will determine whether "WALL-E" is a commercial success or failure.

And beyond these thoughtful paradoxes, this animated, summer movie dares to raise a principle central to our humanity. People -- children and others -- require constant reminding they are more than the sum of their wants. And in this task, a little robot will lead them.