Michael Brown
|
Posted: Aug 01, 2018 9:00 AM
Share   Tweet
The opinions expressed by columnists are their own and do not necessarily represent the views of Townhall.com. 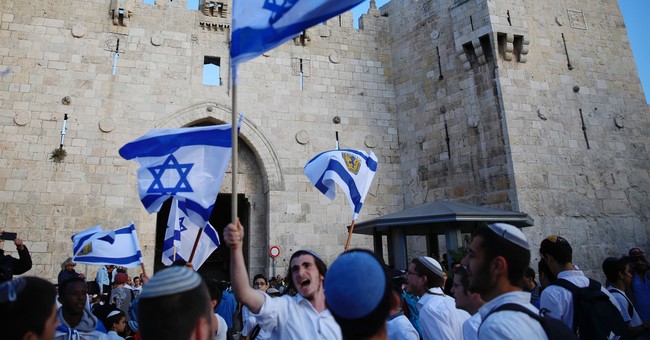 There is a civil war looming in Israel, but very few are talking about it.

It is the war between ultra-Orthodox Jews and liberal Israelis. The rift is large and growing, and it was underscored by the conflict this week between LGBT activists and ultra-Orthodox rabbis.

But first, some important demographics.

Ultra-Orthodox Jews (called haredim) are the fastest growing segment in Israel, currently making up roughly 15 percent of the Jewish population (about 1 million out of 6 million). And based on current birth rates, the haredim could make up more than one-third of the total Jewish population of Israel by mid-century. (Ultra-Orthodox Jews have very high birth rates coupled with very little assimilation into the secular culture.)

“By 2024, the study predicts, haredim will make up 14% of the Israeli population, rising to 19% by 2039, and 27% by 2059. At that point haredim will be a whopping 35% of the total Jewish population, outnumbering the secular, traditional, traditional-religious, and religious sectors.”

But there’s more to the story.

Israel is a very fragile democracy, by which I mean that it takes a coalition of various parties to lead the nation. It’s not as simple as electing President Trump or President Obama. Instead, Israelis vote for parties, which are led by individuals. Various parties then work together to get a total of 61 seats in the Knesset (Parliament).

In the last election (2015), Prime Minister Netanyahu’s party, Likud, got the most seats. But in total, Likud only won 30 seats, meaning that it had to work together with other parties to reach the magic number of 61. (Overall,10 different parties won seats; there were a total of 25 parties that competed.)

To put his coalition together, Netanyahu had to include two ultra-Orthodox parties, United Torah Judaism and Shas, both of which won just 6 seats. But they are major power brokers in the government with disproportionate influence, since Likud could not govern without them.

Despite their small size, they can demand special benefits, including government support so more of their men can devote themselves to day and night Torah study, along with exemption from serving in the military.

What makes this even more interesting is that many haredim are anti-Zionist. Their leaders opposed the modern state of Israel before 1948, feeling that: 1) it was up to the Messiah to regather the exiles and reestablish the nation; 2) a secular Jewish state would be an abomination in God’s sight; and 3) an Israel established by man rather than God would increase world anti-Semitism. To this day, most haredim do not celebrate Israel’s Independence Day; some actually mourn.

Yet the rest of the Jewish Israeli population is quite “progressive” and liberal. As noted in Israel Today, “As a nation, Israel prides itself on tolerance toward and acceptance of homosexuals. There are openly-gay members of Knesset; the IDF touts its integration of the LGBT community; Tel Aviv is advertised by the Israel Ministry of Tourism as a top gay travel destination; and Prime Minister Benjamin Netanyahu recently highlighted Israel's homosexual credentials at the American Jewish Committee conference.”

And with LGBT activism getting bolder and louder, a conflict with ultra-Orthodox Jews becomes even more certain. This is especially true in Jerusalem, since it boasts a significant haredi population and is considered particular holy in Jewish tradition.

Recently, however, to the consternation of liberal Israelis, “Netanyahu and his Likud Party . . . helped defeat a motion to include homosexuals in a new amendment to Israel's surrogacy laws. The amendment enables single would-be mothers to now make use of surrogacy on the state's dime. Homosexuals hoped to be included in the new regulations, and took to the streets of Tel Aviv in mass protest when the Knesset rejected their appeals.

“In response to the liberal outcry, Chief Rabbi of Jerusalem Aryeh Stern insisted that children born to gay couples would ‘enter a very strange and unnatural life,’ and that the government of Israel shouldn't be party to such a ‘wretched’ state of affairs.”

Stern’s remarks were widely vilified, as a result of which 200 ultra-Orthodox rabbis wrote a letter supporting him, ending with, “The media's brainwashing that seeks to destroy the concept of family and turn perverts into heroes will not succeed, and nor will the attempt to silence rabbis and sane people and turn them into delusional extremists.”

Not surprisingly, this letter received even more severe backlash, “and a petition was started demanding that any of the 200 rabbis who draw a government salary should be fired immediately.”

At the same time, with a gay pride march scheduled for Jerusalem this Thursday, August 2, the chief rabbi of the city “has called for the city to remove rainbow flags from the vicinity of the city’s major Synagogues.”

This is quite understandable. But in recent years, things got totally out of hand, and “16-year-old Shira Banki was killed at Jerusalem Pride in July 2015, when [the] ultra-Orthodox Jewish man Yishai Schlissel went on a stabbing spree.”

Tensions, then, are very high.

For those who pray for the wellbeing of the nation, this is something to keep in prayer.