The Media’s Glaring Double Standards on Violence and Hate

Michael Brown
|
Posted: Aug 18, 2017 9:12 AM
Share   Tweet
The opinions expressed by columnists are their own and do not necessarily represent the views of Townhall.com. 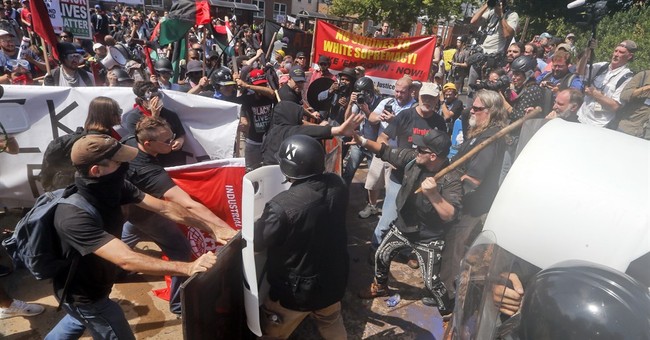 So I don’t have to repeat myself throughout the article, I’ll say things loudly and clearly at the outset.

The KKK, white supremacists, and neo-Nazis are evil. I deplore what they stand for and denounce it – as a follower of Jesus, as a Jew, as an American, and as a human being. I pray that they would repent and find mercy from God, and to the extent that the media exposes their lies, I applaud the media.

But I cannot applaud the media when it comes to its reporting of acts of hatred and violence on the radical left. Their double-standard is glaring, ugly, and inexcusable.

You see, the question is not, “Is Antifa as bad as the KKK? Are radical leftists as evil as neo-Nazis?”

I’m not talking about Charlottesville here or making a moral comparison between the groups involved. I’m talking about a consistent pattern of dangerous words and deeds from the radical left, most of which get scant attention from the media.

Shall we do some math?

Over the last 12 months, how many campuses have succumbed to pressure from white supremacists and cancelled a talk by a well-known liberal? Can’t think of any?

Well, let’s keep going. How many campuses have even received threats of harassment or disruption from white supremacists should they try to host such a talk? Still somewhere around zero?

In contrast, over the last 12 months, how many campuses have succumbed to pressure from radical leftists and cancelled a talk by a well-known conservative? If my memory serves me right, Berkeley did it twice (once with Milo and once with Ann Coulter), while other campuses, like De Paul, refused to allow Ben Shapiro to speak. And all this because of security concerns – meaning, because of threats of disruption from the left. Toronto University just cancelled a “free speech” event featuring Prof. Jordan Peterson and others because of security concerns as well.

It looks like the left can get pretty nasty too. (For more examples, see here.)

Author Charles Murray, along with Prof. Allison Stangler, who invited him, was physically attacked by protestors at Middlebury College after his speech. “One threw a stop sign with a heavy concrete base in front of the car Murray was in, and several others rocked, pounded, and jumped on the vehicle. One protester pulled Stanger’s hair and injured her neck. She was taken to a hospital, where she was treated and released.”

Heather Mac Donald’s speech at Claremont was shut down when protestors blocked entrance to the building, after which she said, “This is not just my loss of free speech. These students are exercising brute force against their fellow students to prevent them from hearing me live.”

And what were the protestors chanting? “[Expletive] the police, KKK.”

Where was the consistent outcry from the leftwing media? How many hours were devoted to covering this? How many liberal politicians were called on to denounce it?

More recently, when protestors pulled down a Confederate statue in Durham, North Carolina, NPR reported that they were chanting, “‘No KKK, No Fascist USA.”

Actually, they were chanting, “No cops, no KKK, no fascist USA!”

Why did NPR omit “No cops”? What were they hiding? Why not make clear that, in the eyes of these vandals, the cops are no different than the KKK? (Listen to NPR’s audio here.)

As evil as the KKK and neo-Nazis are, they were not the ones carrying out these acts of hatred, violence, and vandalism. All this is coming from the radical left. Why, then, put so much focus on the so-called alt-right and so little (if any) on the radical left?

Here are some more specifics.

As reported by the Daily Caller, “Antifa’s violence ranges from stabbing a police horse in the neck to beating people with bike locks. Antifa physically assaulted a reporter with The Daily Caller News Foundation in January and a search on YouTube reveals hours of footage displaying Antifa violence from protests across the nation. Antifa thugs are additionally known for assaulting police officers and chasing down fleeing people in order to beat them.”

How much of this was covered by CNN?

How many of you knew that? Antifa branded a domestic terrorist group by an official government security agency?

As for Antifa’s handiwork at Berkeley when Milo was scheduled to speak, “Antifa groups . . .  rioted, destroyed property, beat people with flagpoles and pepper-sprayed a women [sic].”

I guess it’s not all about peace and love and equality and tolerance?

And this is not just taking place in America. How about the attack last December on the Australia Christian Lobby building in Australia? As reported by the Australian, “The man accused of driving a burning van laden with gas bottles into the Australian Christian Lobby headquarters was a gay activist who disliked the group because of its ‘position on sexuality’ and had searched online how to make plastic explosives and a pressure-cooker bomb.”

Shades of Floyd Lee Corkins trying to carry out an act of mass murder at the FRC headquarters in DC in 2012, inspired to do so by the radical-left SPLC.

Both the Washington Post and the Nation carried pieces this week calling for physical violence against the alt-right, with the Post headline calling for “direct action” and the Nation headline reading, “Not Rights but Justice: It’s Time to Make Nazis Afraid Again.”

With this logic, even if the “Unite the Right” marchers in Charlottesville had not engaged in any violence, their ideologies are so evil that they should be violently attacked. Is this the America you want to live in?

And let’s not forget that, for years now, those of us who lovingly oppose LGBT activism have been branded Nazis, KKK, and worse. Perhaps we should be subject to violence too? Perhaps the gay activists who held up signs in 2008 calling for Christians to be thrown to the lions will get their wish?

Without a doubt, the media should report on something like the “Unite the Right” march that drew 500 militants to Charlottesville. And with one voice, every American should denounce it. Let those 500 be shamed and isolated, and let their ideology be exposed.

But the media should give equal attention to radical leftists who engage in violent words and acts in other settings, be it Antifa activists vandalizing a campus, student protestors assaulting a professor, or Black Lives Matter marchers chanting (about cops), “Pigs in a blanket, fry ’em like bacon.”

If the leftwing media wants to regain even a shred of credibility, it will have to step up its game. Lives are literally at stake.