Ben and Jerry’s Proves Same-Sex ‘Marriage’ Is Not Marriage

Michael Brown
|
Posted: May 25, 2017 9:33 AM
Share   Tweet
The opinions expressed by columnists are their own and do not necessarily represent the views of Townhall.com. 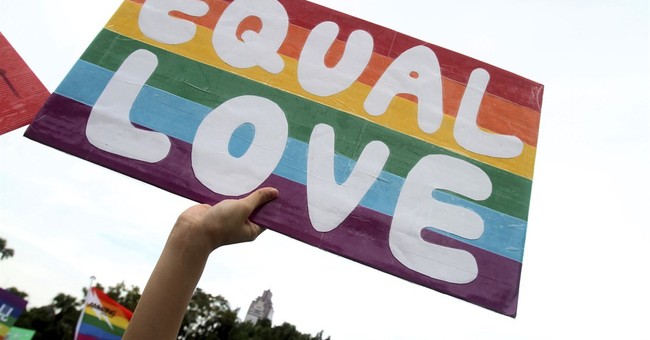 The famous, specialty ice cream company, Ben and Jerry’s, has unintentionally given us further evidence that same-sex “marriage” is not marriage. How so?

The ice cream experts, who have long been known for participating in left-wing activism, went one step farther this week. As a headline in the Daily Mail announced, “Ben & Jerry's BAN customers from ordering two scoops of the same ice cream until Australia legalizes gay marriage.”

That’s right. If you want two scoops of New York Super Fudge Chocolate on your ice cream cone, you can’t have it. You’ll have to settle for just one scoop or mix in another flavor.

This is Ben and Jerry’s way of sending a message: “we believe that love comes in all flavors.”

The company explained on its website: “Imagine heading down to your local Scoop Shop to order your favorite two scoops of Cookie Dough in a waffle cone,” the company wrote.

“But you find out you are not allowed… you'd be furious!

“This doesn't even begin to compare to how furious you would be if you were told you were not allowed to marry the person you love.”

“So, we are banning two scoops of the same flavour and encouraging our fans to contact their MPs to tell them that the time has come- make same sex marriage legal! Love comes in all flavors!”

You might say, “Well, this sounds somewhat stupid, but how does it prove that same-sex marriage is not marriage?”

I’ll explain in a moment, but first, Ben and Jerry’s should realize they are heading down a slippery slope.

The absurdities go on and on.

As my assistant Dylan asked after reading the Daily Mail article, “And perhaps there's a current loophole (and bigotry) to their current position. What if some chocolate ice cream identifies as vanilla? (I mean, who are they to be so primitive as to label all chocolate ice cream chocolate just because that's what society has done through the ages.) Can you then go ahead and get a scoop of chocolate and a scoop of trans-flavored (chocolate to vanilla) ice cream?”

In all seriousness, I understand that Ben and Jerry’s is not comparing human beings to scoops of ice cream. The company is making a point and showing solidarity. They believe they are standing up for justice and equality. I get all that.

Still, the nature of their protest is self-refuting, demonstrating the point that same-sex “marriage” is not marriage at all.

Let’s say that chocolate represents men and vanilla represents women. You take one scoop of chocolate and one scoop of vanilla and what do you get? Something new. Something distinct. A unique blend of the two flavors. Two entities that are different and yet similar now become one.

That is a picture of marriage, which is the unique blend of male and female, the unique union of two different and yet similar entities. Borrowing imagery from John Gray, marriage is the union of Mars + Venus.

Going back to ice cream, what happens if you get two scoops of chocolate or two scoops of vanilla? What do you end up with? More of the same. The same multiplied. No change in color or flavor. Nothing new created out of the union. You simply have Mars + Mars or Venus + Venus, which does not equal Mars + Venus.

Do you see the point?

I’m sure gay couples will say that their union brings together very different parts and make them into one new, harmonious whole. But marriage is more than that (otherwise every friendship would be a marriage of sorts).

Marriage has always served the purpose of bringing together the uniquely different but similar entities of males and females. Through the two of them becoming one, a new entity is created: a paired couple. And by design, that paired couple, biologically made for one another, can produce brand new life.

No same-sex couple in the world, however loving or committed they may be, can produce new life in this way. Nor can any same-sex couple demonstrate the fullness of marriage because it is missing the essential components of marriage: Not just two people, but one male and one female.

Quite unintentionally, Ben and Jerry’s has just reminded us of this reality. And while I do appreciate their zeal for cultural causes, maybe they should turn their attention to other pressing issues, like the health risks of obesity.

On second thought, they might not want to tackle that one at all.