Have White Evangelicals Joined with the KKK and Nazis?

Michael Brown
|
Posted: Nov 14, 2016 12:01 AM
Share   Tweet
The opinions expressed by columnists are their own and do not necessarily represent the views of Townhall.com. 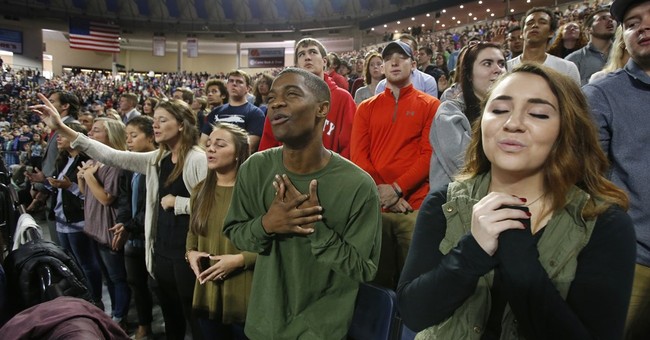 A respected NBA coach says, “I'm still sick to my stomach, and not basically because the Republicans won or anything, but the disgusting tenor, tone and all the comments that have been xenophobic, homophobic, racist, misogynistic. And I live in that country where half the people ignored all that to elect someone. That's the scariest part of [the] whole thing to me.”

Yet it was white evangelicals who played a critical role in getting Donald Trump elected, voting for him at the rate of 81 percent.

Accordingly, a headline on USA Today proclaimed, “White evangelicals just elected a thrice-married blasphemer: What that means for the religious right.” And a New York Times op-ed was titled, “The Rage of White, Christian America.”

Are these sentiments exaggerated?

Commenting for Christianity Today, African American pastor Jonathan Brooks said, “Donald Trump is our president and I am speechless. Deep down inside, despite what we have seen over that last few years, I thought we had made progress. I just knew that a blatant racist and accused misogynist could not be the leader of our country. But I was wrong! America proved that we care more about preserving a way of life that privileges a few than protecting the lives of our most marginalized.”

Dominique Gilliard, another African American evangelical leader stated, “While Hillary was undoubtedly a flawed candidate, white evangelicals' unprecedented supported of Trump—despite his racism, misogyny, and ethnocentrism—is revelatory, and deplorable. Did this bear witness to whiteness rather than the Gospel? What did this communicate to the world about our God?”

As expressed pointedly by Mexican-born Chicago pastor Paco Amador (quoting the words of Sandra Maria Van Opstal), “How long [Lord] must we live in a country that continues in the idolatry of white supremacy and self-preservation?”

But was this election really about “the idolatry of white supremacy and self-preservation”? Did white evangelicals simply ignore Trump’s “racism, misogyny, and ethnocentrism,” indeed, his alleged “blatant” racism? And why did a “slightly larger share of black and Latino voters cast ballots for Trump than supported Mitt Romney in 2012,” as noted in a post-election article on CNN.com?

If a vote for Trump was a vote for “white supremacy and self-preservation,” then why did more black and Latino voters cast votes for Trump than for Romney?

And, quite candidly, my reluctant vote for Trump had nothing to do with “the idolatry of white supremacy and self-preservation” – of “whiteness rather than the gospel” – nor did I overlook our president-elect’s myriad, glaring faults. And of the many friends I know who voted for Trump, none of them did it glibly, none of them excused his failings, and none of them did it to preserve some kind of white power structure or privilege. (Interestingly, the vast majority of black callers to my radio show voted for Trump.)

How, then, do we bridge this deep, painful gap in our perceptions?

As a white, male evangelical, I need to listen carefully to my black and Hispanic colleagues, along with others who are appalled at the Trump election (in particular, women of all backgrounds), and I need to understand how threatening and obscene his words sound to them. And as much as I disagree, I need to understand why so many see this as an issue of maintaining white superiority.

More broadly, I need to understand how Trump is perceived by immigrants and minorities in general, especially Mexicans and Muslims. Although the media has certainly inflamed tensions, there is a reason those tensions exist.

On the flip side, those who are appalled that their fellow-believers could vote for Trump need to understand that many of us were primarily voting against Hillary and therefore for the unborn, for a conservative Supreme Court, and for religious liberty. We were also voting against what we felt was the negative direction our country had taken under President Obama, a direction that would have been continued under Hillary Clinton – and to repeat, for us, this had nothing whatsoever to do with “the idolatry of white supremacy and self-preservation.”

And while some of us would dispute question whether Trump is actually racist, let alone blatantly racist, most of us would not dispute that he is the most unlikely candidate ever supported by conservative Christians. Yet we believe that, in God’s sovereign purpose, He could be raising up this unlikely vessel for such a time as this. And the fact that he has so many solid evangelicals so close to him, possibly at a level unprecedented in numerous elections, gives us genuine hope that he has an open ear to our cause and will seek to be the president of all the people of America.

Certainly, some evangelicals have almost granted president-elect Trump the status of savior, even trying to present him as a saint, and I have consistently challenged this mentality. Yet I do not believe that is the case with the vast majority of his conservative Christian voters, many of whom supported other candidates before finally turning to Trump. (Seminary president Dr. Richard Land, who voted for Trump and encouraged others to do so, said on my show that, out of the 17 Republican candidates, Trump was his 18th choice.)

In short, evangelicals who voted for Trump need to understand why their anti-Trump colleagues are so devastated and shocked by the outcome of the election. There are legitimate reasons for their concerns. Conversely, anti-Trump evangelicals need to understand that their colleagues who voted for Trump are not white supremacists who blindly embraced a debased candidate, and we had legitimate, prayerfully calculated reasons for our votes.

In the end, since Donald Trump is the incoming president of the United States, it is imperative that all of us come together and work for the common good, but that can only happen if we do our best to see one another’s perspective.

Can we find a way to join together as one for the good of our hurting nation, even with our deeply mixed views on our president-elect?

We really have no choice. And regardless of our views about president-elect Trump, for whose success as president we pray, we can and must do the work of the church – living godly lives, preaching the gospel, helping the poor and the needy, and standing for justice.