Why Not Three? The Question Gay Activists Cannot Answer 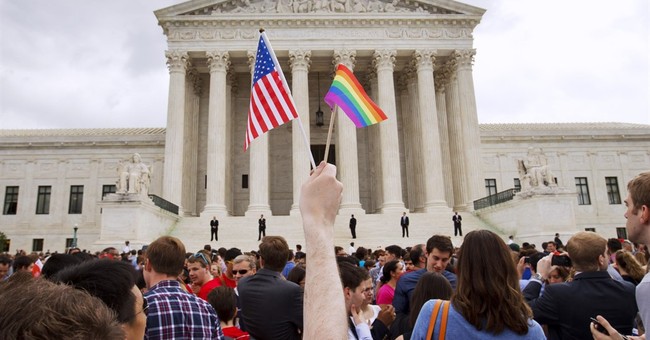 We knew this was coming for some time now, and there are already “throuples” (meaning three men or three women in “committed” relationships) in America and other nations, but for the first time, one of these throuples has come up with an innovative way to be legally married – or at least almost legally “married.”

Now, the fact that they involved a third person in their sex lives is not that unusual with gay male couples, and gay activists like Dan Savage actually encourage gay couples to be “monogamish” rather than monogamous, claiming that this makes their relationships healthier and more stable.

Shayne was all for this,

Sounds like your typical, heterosexual couple, right? Getting married, going to bars, and experimenting with multiple partners. (Sarcasm intended.)

Well, what’s wrong with that? If they’re in love and they’re happy, why not? And why shouldn’t the law accommodate them? After all, love is love, right? Long live marriage equality for all!

In July, I wrote an article titled, “Why Two? The Question Gay Activists Cannot Answer.” The question behind that article was simple: If marriage is not the union of one and one woman, why limit it two people? Why, for that matter, require two people? Why can’t you marry yourself?

In response, a writer for the Huffington Post posted an article titled, “Polygamy Is Not the Next ‘Gay Marriage,” but it was easy to refute the arguments presented there, which I did in my subsequent article, “A Huffington Post Writer Takes My Challenge and Fails Badly.”

Now, with this new development in Canada, things have gone one step further, and this gay throuple wants to see a change in the law to recognize their relationship.

As Adam said, “Although being married to more than one person is not yet legal, we have spoken [to] lawyers who can draw up paperwork to make sure we are equally bound and obligated to each other in the eyes of the law.”

And note carefully those words: “not yet legal.”

Last week, I tweeted out, “Why is it when I say, ‘God intends marriage to be the union of a man & woman,’ I get flooded with death wishes, vulgarity, & profanity?”

A gay man responded, stating that I was bigoted to hold to this position. (That still doesn’t explain the death wishes, vulgarity, and profanity, but we’ll ignore that for the moment.)

When I probed him on his position on marriage, he made it clear that he believed in marriage equality for all, regardless of number or even family relationships (in other words, even adult incest was OK).

I then asked him if he was calling out gays who wanted to limit marriage to two people, accusing them of being bigots.

I never got a reply.

But what kind of reply could he give?

Would he say, “But marriage has always been about two people?”

How could he? First, it’s not true, since polygamy has been very common throughout history (up until today), and, second, the last thing he would want to do is to point to what marriage has “always” been, since it’s always been about the union of a male and female.

Now that gay throuples are asking for the right to “marry,” what will gay activists say?

This is not polygamy or even a polyamorous combination of males and females. This is gay all the way – three men in this case; three women in other cases.

Earlier this month, I demonstrated in a video how Stephen Colbert’s mockery of the slippery slope argument actually proved the point he was mocking.

Our response to all these developments is simple: We refuse to redefine marriage, regardless of the Supreme Court’s recent decision (one that we must work to overturn), and we demonstrate God’s intent for marriage – a lifelong relationship between one man and woman, with the goal of producing children for the next generation and joining those children to their mother and father.

As for the gay activists, will they mount a vocal protest against this new call for “marriage equality” from Canada? Do they dare?