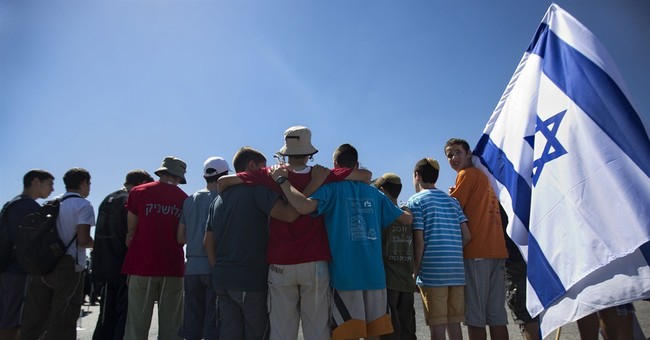 There have been and will continue to be Jewish terrorists who use their religion to justify murder, but the difference between Jewish jihad and Islamic jihad is that only in Islam is jihad a legitimate expression of the faith.

It is true that there have been religious Jews like Baruch Goldstein, who gunned down 29 Muslim worshipers and wounded more than 125 others before being beaten to death in 1994. And it is true that his epitaph reads, “He gave his life for the people of Israel, its Torah and land.”

And it is true that in 2009, an ultra-Orthodox rabbi wrote a book in Hebrew entitled “The King’s Torah,” in which he made outrageous statements like, “Hurting small children makes sense if it's clear that they'll grow up to harm us, and in such a situation – the injury will be directed at them of all people.” And he did this in the name of Jewish law.

And it is true that Jewish extremists in Israel have chanted “Death to the Arabs,” especially in the aftermath of atrocities committed against their own people – especially children – by Muslim terrorists.

And it is true that Yitkhak Ginzburg, an ultra-Orthodox Israeli rabbi, responded to the kidnapping and murder of the three Israeli teenagers with calls for revenge, stating, “Revenge is a natural, spontaneous reaction, and it is led by a feeling that until I find the power to hurt whoever has hurt me I will not experience revival.”

How many organizations are found in Judaism that parallel substantial Muslim groups like Islamic Jihad, Hamas, Hezbollah, Al-Qaeda, the Taliban, Boko Haram, or ISIS?

How many religious Jews studying in yeshivas are trained in the art of blowing themselves up with bombs?

How many rabbinic texts (in comparison with Koranic texts) can legitimately be used to justify the murder of innocent people in the name of holy war?

And if Jews are indeed guilty of the kidnapping and horrific murder of a Palestinian teen in revenge for the murder of the Israeli teens, there will be national horror, not jubilation.

As noted by Ben-Dror Yemini, “Here an absolute majority opposes the murder. In the Gaza Strip, Hamas is the government. We have no cries of joy. They have celebrations of joy, and the murderers’ families hand out candy. Here, the state stopped funding the Od Yosef Chai Yeshiva [led by the aforementioned Rabbi Ginzburg]. There, the murderers continue to receive regular monthly funding from the Palestinian Authority.”

It is simply to say that to do so requires a fundamental violation of many of the tenets of Judaism, while in Islam, such violence can be easily justified.

All that being said, at volatile times like this in the Middle East, we would do well to remember the classic words of Golda Meir spoken to Anwar Sadat: “We can forgive the Arabs for killing our children. We cannot forgive them for forcing us to kill their children [meaning, in war]. We will only have peace with the Arabs when they love their children more than they hate us.”

The power of hate, which goes far beyond the call to justice, shows no favoritism and, if not checked, will destroy not only Muslims but also Jews.

Let us then, without reserve or qualification, utterly renounce “Jewish jihad.”